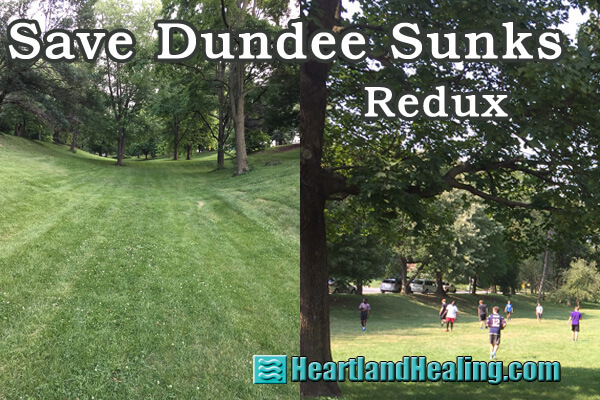 As I wade into the crepuscular stillness of the hollow only two blocks from my home, I bask in the sense of solace that overcomes me, draining away the cares and stresses of the day. In this twilight I can just make out my fellow revelers: two people tossing a frisbee in the open field. Then I spot a toddler and her parent, the younger chasing fireflies and squealing in delight, though her cries are muffled nicely by the leafy branches of our arboreal canopy. Behind me on the sloping side of the northern reach of the hollow, a girl and boy, twenty-somethings I reckon, recline, talking. Their skateboards sit silent next to them because there is no place for their wheels to roll noisily on the carpet of grass, no sidewalks or walls to rail, no hard surfaces at all in the hollow.

A boulevard, not a park. It is important to remember that distinction. I am walking through the greenspace known as Happy Hollow or “the sunks” to locals. It is as its 19th-century designers intended: a respite of nature’s design from the urban scrum that surrounds it. It is a boulevard; one of the boulevards linking Omaha’s park system that was laid out in the 1880s and ‘90s. It is located between Western Ave. and Underwood in the district of Dundee. The hollow is a boulevard not a park and it serves its function well just the way it is.

Now a couple of developers want to eliminate the flow of that greenspace with a two-million-dollar project that would place permanent buildings, sidewalks, staircases, hardscape, electricity, lighting, irrigation and walls; obviously removing trees and plants in the process. They foresee weddings and concerts in the space, other adult events. The local daily and some newsletters have published articles that suggest that everyone thinks it’s a great idea. That isn’t exactly accurate if you ask the local and longtime residents who would be most affected by the unprecedented construction and misuse of the hollow that is planned.

Concerned. Dundee residents along Burt, Webster, Cuming streets and elsewhere are not at all on board with the idea. They favor keeping the hollow the way it is, as originally designed. They list a number of concerns and observations.

Parking and traffic. Wedding? Concert? Nearby residential streets will be flooded with outlier cars, people looking to park; increased traffic flow and disruption.

Greenspace lost. Though the developers describe their plan as a “restoration,” that is inaccurate, some say bordering on disingenuous. As originally designed, the hollow is a perfect buffer from noise, traffic and hubbub. That was how and why it was conceived, just as the other boulevards in Omaha. The hollow never has had a pergola, a gazebo, walls or sidewalks, staircases and lighting as the new developers plan.

Stormwater control. Replacing rain-absorbent greenspace with hardscape will cause runoff problems. As Hurricane Harvey waddled onshore in Houston, residents there rued the loss of wetlands and greenscape that unfettered development caused. That’s a macro example that would evidence in the microenvironment of the hollow.

Light pollution. It may sound trivial to those who don’t live nearby but light pollution is a real concern of neighbors. It disrupts both humans and wildlife. Originally and currently, the hollow is a buffer from intrusive city lights. The new plan intends to install LED lighting at a time when many municipalities are abandoning LED lighting for public use because of the health damaging characteristics of the light spectrum they emit. And say goodbye to the fireflies.

Noise. Want an unexpected concert or wedding in your backyard? Thought not.

Increased chemical and pesticide use. The garden designers have pesticide spraying in their plans. Presently there is zero pesticide use in the hollow. At a time when cities across the country — from Madison, Wisc. to Burbank, Calif. — ban spraying RoundUp and glyphosate, this plan calls for beginning it.

Stealing from the kids. The hollow is currently a blank slate of nature, used by adults and kids alike, end to end. The plan would take much of it and build adult-use structures. Why?

Historical record. There have never been permanent buildings, pergolas, walls, gazebos in the plans for this or any other Omaha boulevard. The new plan deviates.

What’s the need? There is a formal, manicured garden maintained by the city barely two blocks away at Memorial Park that is magnificent and accessible to all.

Those are but a few of the concerns.

A couple of good guys. At their invitation, I met with commercial real estate developer Matt Dwyer and his partner Adam Gouttierre.  They are the principal planners. To say they have their developer ducks in a row would be an understatement. Their artist renderings do exactly what artist renderings always do: They make the project look idyllic. Blue skies, happy people, beautiful buildings. You won’t see graffiti or pooling water or groundskeepers spraying RoundUp in an artist’s rendering. Still, I came away feeling that they are a couple great guys; well-intentioned though on a mistaken path. I have sympathy for their perspective. It’s like this: Put a canvas in front of an artist and she sees a painting. Put a canvas in front of a housepainter and he sees a drop cloth. Put a canvas in front of a sailor and he sees a sail. When you put an open, undeveloped space in front of a commercial real estate developer he’s going to see a place to build something. It’s called the prism of perspective, imprisoned by a viewpoint. Here’s hoping they can break its spell over them. Most of us still see our local greenspace as it was intentioned — a natural, healthful respite from urban encroachment.