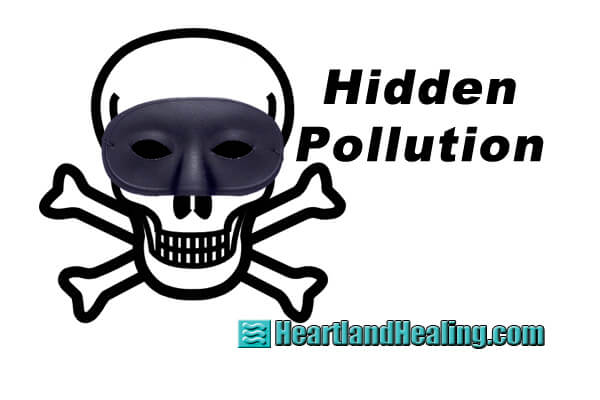 A couple years ago I was driving from Fargo back to Omaha. It was during the protests over the Dakota Access Pipeline and so I plotted a route over to Standing Rock in order to add my voice. Like many others, the possibility of bitumen sludge leaking into the Missouri River was an ugly image in my mind. The road into the reservation was closed so I was diverted.

Though it’s true that if we are sane, we must pivot away from burning carbon to produce energy, that problem is only the tip of the iceberg when it comes to how humans are defiling this planet. Hidden pollutants, because they don’t have the optics of goo-covered seagulls and tar covered beaches don’t reap the headlines that oil spills do. And the hidden pollution is far more vast and deadly than a tanker or pipeline leak. Chemicals, agriculture runoff, noise, light and radiation are ever-present and ignored because they have no iconic image to drive them into the public gestalt. But they are deadly nonetheless. Let’s examine.

Agricultural runoff. While protesters rail against icky oil leaking into watersheds — a valid concern — the chemicals that industrial farming continuously pours into our waterways are already there and far more dangerous. It’s an essentially invisible form of pollution that is already in the streams, lakes and rivers of the great American watershed of the Missouri/Mississippi basin. One audit dating to 2010 found 12.7 million pounds of toxic chemicals in the Mississippi, 32 million pounds in the Ohio River, and 5 million in the Missouri, in just that one year. These deadly chemicals aren’t visible. They don’t make for weepy donation shots on websites. But they are killing us and our planet. They wash down the rivers into the Gulf of Mexico making that fecund basin sterile for thousands of square miles, killing all life therein. Industrial agriculture uses 70 percent of our available usable water and what it puts back into the cycle contains pesticides (RoundUp, 2-4D, atrazine, etc.) synthetic fertilizers, animal sludge, heavy metals because of our “advanced” way of farming with giant livestock farms, dairy farms and inedible crops like GMO corn and soybeans. Consider just one pollutant: atrazine, an herbicide that is the most commonly found in our water system. Testing by the United States Department of Agriculture found atrazine in 94 percent of the nation’s drinking water. And not just in small amounts. With a safe level listed as 3 parts per billion, systems exceeded that time and again, sometimes at astronomical levels. That is treated water we’re talking about. Just imagine what the levels are in plain river water. Where are the protests?

Chemicals. They are everywhere and virtually invisible. There are at least 80,000 chemicals in use in the United States. Only a tiny percentage have been tested for safety. We don’t know what we don’t know. But we have managed to put chemicals into nearly everything we touch, eat, breathe. 2000 new chemicals are introduced each year and only a few are tested.

EMF. EMF or electro-magnetic frequency pollution is the broad term used to describe energy pollution. The three major categories of non-ionizing radiation are electromagnetic, electric and radio wave. Typical high electromagnetic field sources include AC wall adaptors, clock radios, motorized equipment (like vacuums, power tools, etc.), TV screens, inside commercial jets and even cars. Typical electric field sources are improper wiring, electric blankets (even when “off,”) fluorescent lights and TVs. Radio wave sources are cell phones, amateur (CB or ham) radio transmitters, and of course, microwave ovens. In reality, we are surrounded at all times by a sea of manmade energy that we have little idea of how it’s affecting us.

Noise. Sometimes lying in bed at night, I can hear traffic on I-80. What is unsettling is that I live miles from the freeway. More unsettling is the day I spent fishing along the Gros Ventre in the remote Wind River Range of Wyoming. All I heard at first was the breeze through the pines and songbirds… until a passenger jet at 33,000 cast a pall of sonic pollution over the canyon. Noise affects us and our health. Our planet is now awash in it with little relief anywhere.

Light. This one is highly visible but largely ignored. It’s insane that we have to light up our cities and empty buildings so thoroughly each night. One cannot fly coast to coast anymore and find a place where there is not a speck of light. This has a negative effect on us and the entire planet. Now the move to “energy efficient” LED lighting is being investigated as a threat. The spectrum of those bulbs is suspected of being unhealthy.

Sure, a pipeline is a potential source of pollution. But that’s just the obvious. We need to see, hear and smell beyond that.