Have you ever wondered about the roles certain people have in your life? Perhaps you’ve met that woman or man to whom you have been explosively attracted; someone who has touched your soul like no one else. Or the person who’s done you wrong and you resent. Or maybe you met a particular person who led you to a life-changing career. Or early on you made a lifelong pal who sometimes annoys the heck out of you but is your best friend. Or you meet someone and find out later how many amazing connections you had but didn’t realize? Or maybe there is someone you violently detest, a villain in your life who undeniably deserves your wrath for deceit, betrayal and conscious harm.

Why do certain people become part of our lives and affect us so much… or so little? Perhaps you dismiss it as just coincidence with a flippant, “Ah, such is life.” Yes, connections to the people in our lives could be the result of mere coincidence. But that leaves the lingering question unanswered: Why?

I have an answer. I’ll explain from the very beginning.

I got high. Sitting around stoned in our college apartment playing with a candle. Blow it out. Touch a match to the rising column of smoke from inches away and the flame crosses the gap, magically floating down to reignite the wick. The candle is alive once again. As long as too much time doesn’t transpire and the smoke particles do not dissipate too far, the candle can reignite.

Honestly though, the story begins even before my college daze, at a time when I was nine years old and read a book titled, Our Friend the Atom, by Walt Disney and Heinz Haber (1957). That book taught me that everything in the universe is made of atoms and those atoms are made entirely of energy. That knowledge colored my perception of the world in an unalterable way. And I learned a lasting respect for scientific fact right then and there.

Having learned the human body simply represents an energy field, it was years later that another book, The Chakras written by C.W. Leadbeater in 1927, taught me that theosophists had a word for the individual energy globules that make up the body and its consciousness: orgone.

I connected the concepts one day in my living room in Burbank, Calif. What if this described the mechanism of what we call a “near death experience”? (And I wasn’t even high.)

When the life force leaves the body, what if that life force lingers just long enough to re-animate that body, much like a flame hovering over an extinguished candle can reignite the wick as long as the smoke molecules do not dissipate too far. What if the life force reassembles the energy globules that make up a human existence before they dissipate into the universe? Is that what happens when a person has a near death experience? The human is restored to his or her previous condition though often feeling changed or reporting a new perception of reality.

The concept also explains why certain relationships during a lifetime have certain significance. 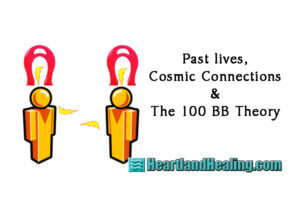 Time for the metaphor. Imagine that a human life, a human body, is “assembled” out of tiny energy globules as quantum physics and theosophy both describe. It doesn’t take much imagination since that’s a fact. The body is indeed assembled of tiny energy globules known as atoms, okay? For the sake of simplicity and our metaphor, let’s say each human is made of 100 steel BB-like spheres. You know BBs; those little balls that are used as ammo in kids’ toy guns.

So we have 100 steel BBs that represent both the physical body and the consciousness of the human. The BBs are held together in the shape of a body by an unseen magnet and as long as that magnetic force is uninterrupted, the BBs won’t go anywhere and continue as a body and consciousness.

So when a human life begins, an Unseen Magnet descends into a pool of BBs. The magnetic force pulls the 100 BBs out of the pool into existence, like one of those arcade games with a claw locks onto a stuffed toy or the more contemporary example of a 3-D printer. The assembled human wanders around this plane for a few solar orbits and then it’s time for the magnetic force to move on and the BBs are released, tumbling back into the pool of billions of available BBs. A human’s life is, for want of another term, “demagnetized.”

Now it’s time to use your imagination. Pretend that the pool of BBs spread across the floor of a boxcar that is hitched to dozens of other boxcars in a railroad train rambling along on the track of time.

Down to Earth example. A man named Joe is born in 1920. He wears his 100 BBs well for a good stay on planet Earth and meets many people in his time. He meets “Tom” who saves Joe’s life in World War II. He falls in love and marries Anna. A man named Bernie steals Joe’s car and kills his dog in 1950. Another, named Bill becomes his best friend. Over his lifetime, Joe meets hundreds of people made from thousands of BBs. They all represent an interaction that Joe has feelings about. They create what you might call “his story” or history.

So eventually Joe’s time here, along with Anna’s, Tom’s, Bernie’s and everyone Joe has ever met, expires and they become “de-magnetized”  at varying times. Joe’s 100 BBs tumble to the boxcar floor along with those he’s met and millions he hasn’t. The train bounces along and the BBs in that particular boxcar mix and roll around. When it is time for another human to come into existence, that Unseen Magnet descends to the floor of the boxcar and picks up 100 BBs to incarnate a new human. Let’s name him, “Jim.”

Now let’s explore where Jim’s “new” 100 BBs have been. Since Jim is coming along so soon after Joe and his friends departed, what if the magnet picks up 100 BBs and the conglomerate “Jim” is made up of 25 BBs from Joe? And what if at the same time, 10 of Jim’s BBs come from what used to be “Anna”? And 5 come from Tom, 2 from Bernie and so on. The new human, “Jim” has energy globules from a lot of people including maybe some from long ago, from a neighboring boxcar even, maybe King Arthur or Lady Godiva.

Within a short time, the magnet descends again to create another human. We’ll call her “Jan.” For Jan, the magnet picks up 100 BBs and guess what? Some of Jan’s “new” BBs are actually recycled BBs that used to be part of the departed Joe… and Tom and even Anna’s and Bernie and others. The new human, Jan, has some of the same BBs the departed Joe used to have. Jan and Jim share some of the same BBs from the same person and persons from before. They don’t consciously realize it… yet.

And the magnet comes down again and creates Seth. Seth has BBs from the group, too. Especially a whole lot from that guy who stole Joe’s car back in 1950.

Seth, Jim and Jan and a bunch of new humans wander around planet Earth for years. Finally one day Jim and Jan bump into each other at a yoga class. They are wildly attracted to each other and you can guess the rest. Why? Because they share so many of the same BBs. And atoms and energy have memory. We struggle to be cognizant of it because it is on such a subtle atomic level. But it’s there.

Then along comes Seth. You can imagine that the feeling for Seth is pretty strong in Jim. Same reason, different result. They share BBs from the past but not so great.

All the connections we face in life have significance because we can never be separated from the energy that persists as we travel the train of time.

The people we meet, we meet and connect with because we share BBs with them, some a lot of BBs and some not so many. Some BBs are from experiences, energies that we branded pleasant and some that we branded unpleasant.

Now you know where the BBs come from. Now you know why the people showed up. What has not been explained is how to keep from branding the experiences. Just light a candle and it will come to you.