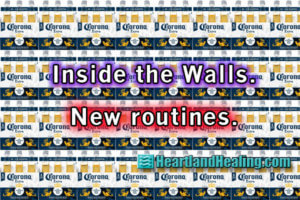 There’s a guitar sitting in the corner. I even have fresh strings upstairs. I’ve wanted to know how to play guitar all my life. And I’ve been around some pretty good players. That’s done nothing to inspire much more than envy. I’ve owned this acoustic guitar for thirty years yet I can play only one three-chord song. Now, faced with our 2020 version of “Silent Spring”, I’ll no longer justify my lassitude even if it means blisters on my fingers.

Like (hopefully) all Americans, even most of the world today, I feel cooped up. At the time of this writing, you probably do, too. My regular habits have been curtailed by the dictum of “social distancing.” Valid or not, it appears required. That leaves me, like everyone else, with the question of what to do when that “do” cannot involve leaving the house or interacting with others; can’t even go to the Do Space.

Since Heartland Healing is charged with informing the public of holistic and natural practices considered alternatives, I’ll share some ideas that come to me that may make confinement comfortable. These are some things I’ll be doing.

Music heals. Learn to play something. Yes, I’ll be picking up that guitar. If you don’t have an instrument, you might make the music store a final foray before the lockdown. Even a wooden recorder or a harmonica would do. And you know what? You could actually learn to read music like the most mundane, average American could before recorded music took that away from us in the 1900s. Or maybe just listening to music, stretching out, streaming some classical instead of Cardi B or some Cardi B instead of classical. Rebuild your iTunes playlists, or if you’re a little deeper, your CDs or deeper still, your LPs.

Letters. Long ago, I rekindled my interest in fountain pens. I visited a stationery store in Burbank and bought a rather nice Waterman ink pen. Recently, I’ve augmented the arsenal with some classic Sheaffer fountain pens, including my cartridge pen kept since high school. No matter what kind of writing instrument you may have, take the time to sit and write letters longhand to relatives and friends. It’s almost meditative. And for the recipient, a meaningful missive at the mailbox is uplifting in itself. Anything is better than another political flyer or bill. But when you post it, maybe moisten the stamp from the tap, not the tongue.

Walk this way. Just because social contact is not advised, doesn’t mean you have to stay in the house. The world’s a big place and specific viruses aren’t everywhere. So, take a walk. Everyday. You can go by yourself or if you’re in confinement with your family, no point in leaving them out. You’ll get fresh air and Vitamin D at the same time. Just walk it off.

Garden. While you’re at it, if you’re fortunate enough to have some gardening space, guess what? The soil temps are already close enough to do some early planting. Onions, spinach, lettuce, peas can all be sown in the chilly soil. At this date, we’re hovering around the low 40s.(1) So clean up the yard and get some food planted. And if you live in an apartment, large planters will do.

Camp. I thought this was going to be easy at first but there is the likelihood that county and state campgrounds will close. They have already in many areas. So my list of wonderful local campgrounds like Arrowhead near Onawa, Iowa and Lake Icaria is kind of moot. But there are still lots of places like national monuments and national forests where you can tent camp.(2) So far as we know, you won’t catch corona virus from a bear. But watch out if the bear catches you. Seriously, though, making friends with nature right now might not be such a bad idea, since human technology doesn’t seem to have an answer. It’s factual that the negative ions released in nature by fresh, running water and surrounding trees and plants can promote healthful results. It’s nature’s way.

Take the steps you wanted to. I have a dozen things I’ve been putting off. Projects, tasks, diversions ranging from completing a drawing someone wanted me to do, painting the basement stairs, finishing a cabinet door. Things like that. I can make some serious dents in that list before this pandemic blows over.

Jailhouse tai chi. My tai chi teacher from long ago emphasized that there is no excuse for avoiding practice. He demonstrated a compressed version of the 27 movements that he called “jailhouse tai chi,” forms that could be practiced even in a confined space. My daily practice of tai chi has fallen by the wayside. What’s fallen by yours?

Look, the key to all this is to realize we have to slow our lives down. Instant gratification had become the norm in this techno-industrial world. It ain’t that way anymore. And that’s not entirely a bad thing.