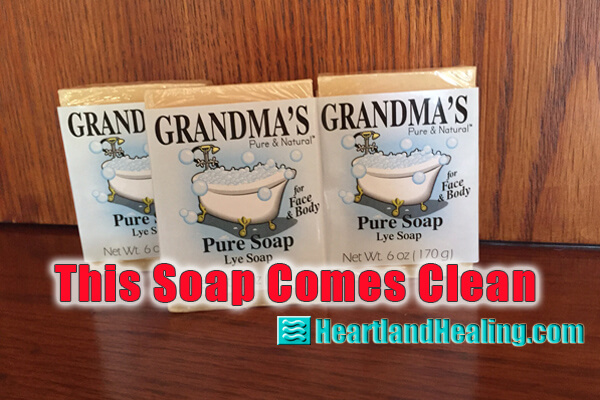 The Dirt on Soap

Soap is simple. When lye, fat and water are combined properly the final result is five parts soap, one part glycerin. Glycerin is a natural emollient and an important part of soap. But most commercial soap has glycerin removed and sold as a by-product, leaving the resulting “soap” harsh and lacking the skin-softening character of natural soaps. To repeat: In natural soap making, lye, fat and water turn into soap and glycerine.

Detergent or Soap? Soap was usually made at home until the late 1800s. Specialty soaps were made in small batches by vendors and commercial soaps emerged later. But as we entered the Age of Petroleum and World War 1, oils of all kinds were valuable for war. That is when we started a trend toward detergents. Commercial soaps on the market today are usually more detergent than soap.

A detergent uses synthetic ingredients and the process includes acids, alcohols and benzenes. For decades, the detergent industry produced cleaning agents that were too harsh for skin and didn’t biodegrade at all. Now, however, most common household soaps are actually detergents; including the ones you bathe with. Ironically, high-priced luxury soaps have to have glycerin added to them to protect and nourish the skin.

Detergent soaps actually can strip our natural skin oils but a natural soap can still get you clean without stripping away nature’s armor.

Less is more Now, I have been misled and betrayed before… by girlfriends, politicians, my own logic and, by consumer products. One example turned me into a cynic when it comes to believing product image.

Being a dog lover and someone who believes strongly in providing real and nutritious food for all the family, years ago we began cooking meals for our dogs using real human quality food. It eventually began to drain on our time and I came across a pet food at Wild Oats named Pet Promise. Well, the packaging was slick. The story on the package featured a guy in Colorado (Steve) who had a sad story about his dog but he decided “to invent, with a veterinarian friend,” the best healthy kibble money could buy. I got sucked in by the tale. Here was a plain, old regular guy who started a small company in Colorado producing good food for dogs. I bought it. The problem is, I’m a curious guy. I wanted to know more about “Steve” and his “small” company so I called the “Pet Promise Hotline.” The very nice lady answered, “Pet Promise.” I asked her how the weather was in Colorado. “Oh, I’m not in Colorado. I’m in Pennsylvania.”

“Oh,” I said, “Outsourcing the Pet Promise call center?” Not a horrible down check but it got worse. “All the Purina product calls come to this call center.” I said, “But I’m calling about Pet Promise, not Purina.” “Yes,” she said. “That’s one of our lines.” What!? Nowhere on that Pet Promise packaging propaganda, covered with mountain images, was there a mention of Purina. Now the topper.

“I thought Pet Promise was made by a guy in Colorado named Steve,” I said.

“Oh,” she said, “Steve is one of our Board Members who lives in Colorado. He was assigned the Pet Promise project. It’s made in our plants nationwide.”

Pet Promise was a complete marketing ruse. Since then, I regularly call to find out who’s behind seemingly small companies that do quality products. Good news is what I learned about my new favorite soap

So I picked up the phone to either expose Grandma’s Lye Soap or confirm its story. I called Tulsa around noon on a Friday. The phone rang maybe four times before a drawling male voice answered. “Hello?” it said. “Sorry,” I said, expecting a more formal answer. “I’m trying to reach the Grandma Soap company.

“Oh, that’s us. I’m Tim and I’m not used to answering. Gretchen’s off today. How can I help you?”

Well, I was simple and to the point though it confused Larry a little bit. I asked how many employees they had, how big the building, make it all on site? Finally, I asked, “Who owns the company?” “Why Grandma Sue and Bill Robertson started it,” Larry said. “Who owns it now?” “What do you mean? They still do, of course,” Larry said, oblivious to my implication that it may have been absorbed by Proctor & Gamble or Amazon by now.

“Can I speak with one of them, please?” “Well, you can but they’re out in the parking lot loading the car for vacation, he said. “Do you want me to get them?”

That was good enough for me. I believed I had found the real deal. Tim went on to tell me of the challenge of keeping food grade lard refrigerated, the small cutting tables they slice the soap on and asked if I wanted Sue and Bill to call me when they return. I was good with what I had learned.

Grandma’s Lye Soap has a clean record. And, oh, did I mention that it’s the best soap ever? Gentle, lathers, leaves the skin so soft because all the natural glycerine is retained. You’ll find it at Ace Hardware Stores.

Heartland Healing examines various alternative forms of healing. It is provided as a source of information, not as medical advice. It is not an endorsement of any particular therapy, either by the writer or The Reader. Access past columns at www.HeartlandHealing.com