Home » Heartland Healing » This Week’s Quiz: Food or Not Food? 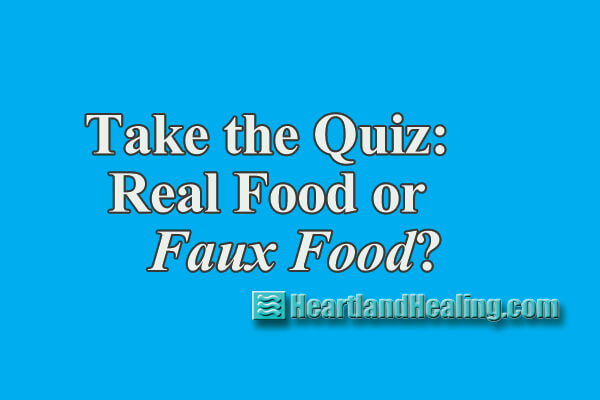 This Week’s Quiz: Food or Not Food?

Americans are fat. We are the fattest people on Earth. I had my hunches why and Dr. Will Clower’s book confirmed it. Dr. Clower is a friend of mine on Facebook. But rewind: He was a friend before Facebook, too. In fact, he was a friend at least ten years before most Americans could spell “Facebook”. I got to know Dr. Clower back around the time he published his book, The Fat Fallacy.

Dr. Clower is a neurophysiologist and neuroscience historian. The Fat Fallacy is one of the most approachable and common-sense books I’ve ever seen from a scientist. Reading it and following the message can lead a person to losing weight and being healthier, though I don’t consider it a diet book. Instead, it helps readers understand why Americans are the fattest and unhealthiest of the industrialized cultures.

Real Food vs. Faux Food  Spending years as a researcher in France, Dr. Clower observed the way the French relate to their food and the diet choices they make. Despite the fact the French consume more fat calories, drink plenty of alcohol and even smoke more than Americans, they are far healthier in regard to weight and heart disease and in other areas as well. In summation, Dr. Clower’s thesis is that the French eat real food and they relate to their food differently than we do. Long ago, Clower explained to me what we should all understand if we apply common sense.

“There are a lot of layers to the problem,” Clower said. “But Americans eat mostly processed food products that contain tons of processed sugar, stabilizers and chemicals that are horrible for our bodies. I was in New York at a book signing. Fellow comes up to talk. Turns out he was a food chemist; blends and makes chemicals that control the flavors of foods. One of the things he made flavors for was Fig Newtons. He said, ‘One of the things we want is to give foods the longest shelf life possible. But we can’t put obvious preservatives in them because people won’t buy it. So what we do is up the content of high fructose corn syrup in our products, especially the low fat ones, and we figure we can get another week on the shelf.’

This. Is. Important. Clower continued, “This food chemist was so excited about making the company money but what do you and I get? Tons of sugar in our food. And that sugar stimulates an insulin response which pulls out blood sugar from the body so that you could eat a whole package of those Newtons and be hungry two hours later.

“The foods we eat make us hungry and that’s because they’re not real foods. In the book I dubbed them faux foods. Just because something is 600 times sweeter than sugar and it isn’t located in the motor oil section doesn’t mean it’s food.

“There are about 35 ingredients just to make strawberry flavoring. And all of them are some kind of chemical. Just because something tastes like strawberry doesn’t mean it’s food!”

Every Body Knows. Said Clower, “Our physiology has a relationship with the earth. It’s a relationship that’s millions of years old. This physiology knows tomato; it knows carrot. It knows fish. It knows potatoes, beans. In terms of evolution, it has never seen aspartame. It’s never seen high fructose corn syrup. It’s never seen hydrogenated oils or anything invented, not made directly by nature. It has no biological relationship with it. If you give your body something it has never seen, it has no context. It will make you unhealthy and overweight. Americans rely on processed food-like products. Something like 13,000 new “food” products were invented over the past 15 years. And our culture feeds on these items.”

The human body doesn’t know how to metabolize that junk. It treats it like a toxin and ends up storing it in fat, making more fat to store it in the more of it we eat.

Take the Quiz. So, readers, think you know the difference between “real food” and “faux food”? Let’s see.

Cheerios: Food or Faux? Cheerios contain at least a dozen ingredients including Tripotassium phosphate, possibly as a desiccant. It would be nice if they came from the Cheerio tree but they do not. Food or faux? You decide.

Apple Juice: Food or Faux? Removing the fiber and other elements from an apple and leaving just the juice provides little more than sugar water. Huge difference. A medium size apple has about 20 grams of sugar. But the carrier (the apple itself) affects the way the sugar is metabolized in a good way.

Oreos: Food or Faux? You should be able to figure this one out on your own.

Applesauce: Food or Faux?  Look at the ingredients, consider the above then think about it.

When shopping, one rule of thumb that I find helpful is: unless it comes in its own skin, be skeptical. Cardboard, cello, styrofoam, metal or glass and I’m not so sure it’s real food.