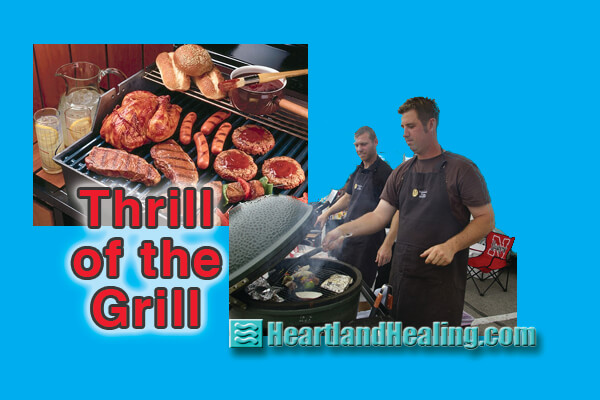 Thrill of the Grill: Addicted to meat

Ironically, as summer draws to a close Americans are drawn even closer to the thrill of the grill. The smell of glowing charcoal briquets and charing animal flesh is no less ubiquitous than a football fan’s favorite team jersey. The final true national holiday of the summer season, Labor Day, also coincides with the beginning of the High Holy Season of American Football. And no other rituals signify that season more than tailgating and backyard barbecue.

Americans are addicted to meat and nothing fits the bill on a grill better than steaks, chops, breasts, burgers and brats. The average American consumes over 200 pounds of meat a year. If you’re counting, that’s over half a pound a day — substantially more than recommended by many health experts.

We all read the news feeds that correlate various meat-eating habits with a number of pitfalls ranging from association with disease to environmental. If one assumes that glut of information is true should we be looking at alternative ways to eat meat that can still sate our human appetite for flesh but remain on the healthy side of the ledger? Turns out there are ways.

Less is More. John Boylan, the record producer who put together the Eagles, produced Linda Ronstadt and Boston and a slew of other hits, was the first person I ever heard turn that phrase, “Less is more.” It’s common now but in the ‘70s when Boylan was at the top, he was cautious of overproducing records and that was his mantra, not “More cowbell.” It was certainly appropriate then but now I hear the same term from a surprising source: my meat-ranching friends.

To simplify things, let’s make it clear that there are two general categories of meats found in the US, indeed, the world: the industrial, mass produced kind and then the other kind, the kind that is raised and processed by small, family ranchers from start to finish, usually feeding the animals the food source that nature intended rather than some kind of supplemental junk food that makes them grow faster and fatter. And one should realize, the nutritional profile of the meat from an animal raised in the way nature intended is far different from that of an industrial source.

How odd but sane it is to hear my rancher friends who raise meat say, “Americans should eat less meat.” But it’s followed with, “But it should be better quality meat.”

Shortest food chain is the healthiest food chain. Stop and think about this. When you buy a package of hamburger or frozen burgers at the supermarket, do you have even a clue where the meat in that package originated? Years ago a New York Times investigation laid it out clearly. Just one single burger from that package likely came from trimmings and cow leftovers from hundreds of different animals from several different states, processed in multiple plants by multiple companies then shipped to a single company that combines all these “meat products” into a giant vat, mixes it together and calls it hamburger. In the Times article, they document a package of burgers that contained meat from Uruguay, Texas, Canada, Omaha and other places… all in one package of burger. Thought exercise: How many human hands in how many various states or countries handled that meat from the time it was raised, through the feedlot, the killing floor, the butchering process, the grinding process, the blending process, the packaging process, the shipping process, the unpacking process, the re-packaging process?

I haven’t purchased meat from a grocery store for 15 years.

Better way. The meat I purchase and consume has a totally different nutritional profile because whether beef, bison, poultry, pork or lamb, the animal ate the food and lived the way that nature intended. Ruminants like cattle, bison and lamb are designed by nature to eat and graze only on grass, start to finish. No corn. No grain. Just grass. Chickens and turkeys are omnivores. They too eat grass but also bugs, annelids, seeds and more. Feeding them nothing but chicken feed and confining them reduces the nutritional profile of their meat and eggs. All livestock thrive and produce better quality meat when they are free to roam in natural pasture and fed only those foods that their bodies are designed by nature to eat.When one of my ranchers (who regularly supplies me with meat, poultry and eggs) takes two or three of his pasture-raised cattle the eleven miles from his ranch to the small USDA inspected processing locker in the neighboring small town, only a couple workers are involved and the cow that goes in is the meat that comes out. For example, the burger is not a blend of hundreds of cattle raised in dozens of different locations in various ways. It’s the burger from one cow raised exactly as I know it was, fed exactly what I know it ate and processed with quality standards that can only be met by a small, family owned meat processing business. That just covers the beef part of our meat freezer. Wait until I describe the bison, turkey and poultry part.

Flavor fave. And I haven’t even touched on why this kind of beef is so remarkably flavorful and tender. It was raised and fed properly. The cattle were selected for genetic traits of flavorful, quality cuts not for rapid growth to market weight. Yes, it may be a touch more pricey but with that comes far better nutrition that leads me to live out that mantra: Less is more.