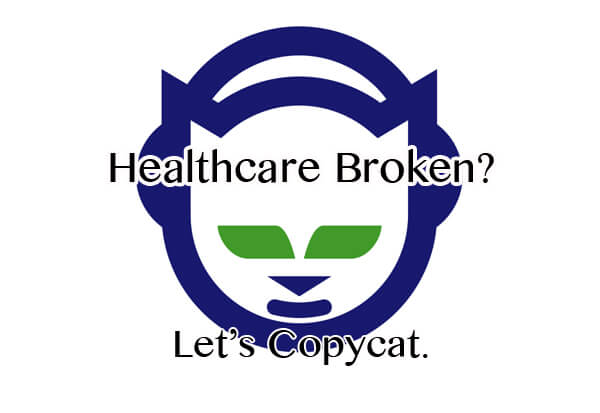 For the first time in modern recorded history, life expectancy in the United States has declined. We spend more on healthcare, by far, than any other country in the world. Yet we languish at or near the bottom of every health category. Now we sit on the eve of the possible dismantling of the controversial Affordable Care Act, aka “Obamacare.” The incoming President has said at various times that he will spearhead the “repeal” of Obamacare and at other times that some provisions will be kept. To purloin a phrase from Mr. Trump, “Obamacare is a disaster.”

When compared to other industrialized nations, the medical system in the United States is at or near the bottom by every metric. Depending on which organization does the ranking, sometimes France is at the top. Sometimes it’s the UK. Sometimes it’s Spain. But what is consistent is that the US is bringing up the rear.

Copycat. It’s been said that when it comes to ideas, “a smart person borrows; a brilliant person steals.” I’ve often wondered why we in the United States seem reluctant to observe then steal when it comes to healthcare (or gun laws, for that matter). All we need to do is look at the systems in other countries that outperform ours and do what they do. Just look at some examples cited by the World Health Organization or the Pew Report or The Commonwealth Fund.

France. Often listed at the top of worldwide lists in medical outcomes, accessibility and low cost, healthcare in France is overseen by the federal government. Citizens hold a Smartcard and though small up-front payments are required, reimbursement happens with days. Costs are low: Get your appendix out for around $4K in France. Around $12K in the US. And medical outcomes are better in France, too.

Spain. Last year a friend from Los Angeles was visiting her sister in Spain. She had a stroke, went into coma and was in intensive care for two weeks, hospital for four. She had two surgeries. Her bill on release was $38 dollars. Spain provides universal healthcare for all citizens and tourists for free. And medical outcomes rank near the top of all countries in the world. Upon return, my friend, who had full coverage insurance, found it impossible to get in to see a doctor in LA without waiting four weeks.

Canada. Oh, Canada! Our neighbor to the north used to be brought up for criticism by politicians whenever the topic of universal, single-payer healthcare was mentioned. Not so much anymore. The reason is that the truth is out. Canada has better healthcare than the United States. Outcomes are better. Costs are lower. And it’s popular among Canadians. The Canadian system got its start in the 1940s with a plan that somewhat resembled Obamacare. It was a mandatory insurance dictum. Soon, however, it morphed into a system where the government is the single provider and some of the services are overseen by the individual provinces. One thing we know is that the Canadian system works. No citizen needs to pay out-of-pocket nor upfront for care. There is sometimes a wait for certain treatments but urgent care and surgeries like necessary heart bypass are performed on the basis of need. What could rightfully be called elective surgeries — even things like knee and hip replacements — may have a longer wait.

It is notable that the healthcare plans vary considerably from province to province, though the central government is the payer. The medical needs of a Canadian citizen in rural Saskatchewan will differ from those of a city dweller in Ontario. Such a system in the United States would mean that the healthy denizens of Colorado wouldn’t be paying for the higher incidence of heart disease in the chitlin circuit South.

Moneyball. Over the past 20-plus years, sitting in as a consultant on many a departmental or board meeting of giant healthcare providers ranging from small clinics to mega-hospitals like UNMC, I saw what drives American healthcare: profit. Called in to assist them in riding the groundswell of popular consensus toward holistic and “natural” therapies, I found that their greatest concern was cashing in. Invariably a good idea that would have extended effective, low-cost and natural treatments ran up against the hard reality of corporate medicine: bottom line. You see, “effective” and “low-cost” does not fit the American healthcare business model. (Hint: Just look at the billions of dollars spent locally expanding hospitals and treatment centers. They’re making a killing, figuratively and literally.)

Any agent who wants to heal the American healthcare system would do well to learn by observing the systems around the world that provide better outcomes, longer life expectancies and at lower cost. It’s not that difficult. Steal. Be a copycat.