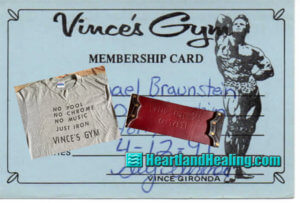 Long, long ago in a galaxy far, far away… — okay, it was the 1980s and it was Los Angeles — I met a man whose fame was embodied in his nickname: the Iron Guru. His real name was famous enough, too: Vince Gironda. Vince’s history is that of a well-traveled life in Hollywood. He was a gypsy, a hoofer in the movies. But really found his niche in the 1940s when he realized his true talent was developing a muscular, finely sculpted physique. Vince was one of a handful of true geniuses I have met in my time. And when I say, “handful”, I mean five or fewer.

Vince opened his gym on Ventura Boulevard in Studio City sometime in the ‘40s he told me. It was one of the most unique places you could imagine. Once you pulled the 20-pound dumbbell that served as a handle on the heavy wooden front door, you entered a single shotgun room with a small desk and counter area to the right. The walls were paneled in pine though mostly covered with plate glass mirrors. The dark red carpet was fairly threadbare when I arrived in the mid-80s. There was a large skylight in the middle of the room with an ancient six-blade exhaust fan that Vince would begrudgingly turn on when the room got steamy. There was no air conditioner. There were no fancy machines. Only heavy wooden benches, some declined, others inclined and all upholstered in rich, Corinthian leather. There were a couple pulley devices that Vince had invented and a sadistic contraption known as a “hack slide” but outside of that it was the land of free weights. At the back wall was a lineup of barbells, stacked across like rifles and beyond that wall, a “shower room” and lockers added to the building as an afterthought; more like a tiki shed than an actual room.

“No pool. No chrome. No Music. Just Iron.” The gym’s motto was ironclad. If a member talked too much on the floor, went to the water fountain in the back too often, even came near the place with one of those new-fangled “Walkman” cassette players or basically offended Vince’s sensibilities in any of a multitude of fashions, they would (usually) get their membership money thrown back at them as Vince tossed them out to the street.

Vince was so sought-after as a trainer and sculptor of the human form that his gym was the first place a young Arnold Schwarzenegger stopped when he landed in LA. Vince took a look at him, declared him “fat,” and told him to come back when he learned some discipline. He eventually did. Arnold would be just another name on the long list of A-List people Vince trained. The most likely and unlikely came to Vince’s. It was the bodybuilder’s version of Rick’s Casablanca Café. All of the movie “muscle men” of the early eras trained there. World Champions like Mohamed Makkawy, Kay Baxter and the aforementioned Arnold would often spot (in the weight room sense) celebrities like Dudley Moore, Clint Eastwood, Sean Penn, Steve McQueen or David Lee Roth or regular guys like me. When Vince finally opened membership to ladies in the 1970s, Cher, Raquel and Bo Derek were regulars. The men at the gym treated the girls just like any other serious gym rat and not eye candy in Spandex.

When I showed up at Vince’s, we happened to hit it off. I could tell he liked me because he gave me a lot of grief but every now and then peppered in a rare and highly prized compliment. As long as I brought him a triple espresso when I came in around 6 a.m., I was gold.

The “guru” part. Vince knew more useful information about nutrition, energy, health and the human body than any medical doctor I’ve encountered. I have no idea how or where he learned so much. And even more remarkable, I have yet to encounter a nugget of wisdom that Vince imparted that was anything other than pure gold.

In the 1980s, when eggs were being vilified by the mainstream as a diabolical dietary disaster delivering deadly cholesterol to the human body, Vince scoffed. “Eggs are nearly the perfect food,” he would say. “Along with raw liver.” That would turn a lot of heads then and quite a few now, too.

But Vince was specific. His breakfast recommendation for me was, “Two raw scratch eggs, two ounces of raw heavy cream in a blender. Followed by six desiccated liver pills.”

The defining term Vince used is “scratch eggs.” That was Vince’s term for “free range” or “pastured” eggs; meaning the eggs were laid by hens able to be outside and “scratch” around the farmyard for insects, grass and nature’s harvest. And “raw” milk was unpasteurized and unhomogenized, meaning the long-chain fatty acids remained whole as they were intended.

Since the 1980s we have indeed learned more about eggs. They are not devil’s food. And we have also seen research that the nutritional profile and omega fatty acid balance in eggs is notably better in eggs that are harvested from hens who can range outside and eat a real diet as nature intended.

We also have admitted that for those who lean toward omnivorous diets, organ meat such as liver is the most nutrient dense we can devour. The caveat, as in all areas of diet, is that the source of the organ meat and the “scratch” eggs must be known, high-quality and vetted. Organ meat especially should be acquired only from grass-fed animals and from a local farmer who is acquainted with the ranching skills needed to provide a healthy animal to the processor.

Vince Gironda earned his moniker. His wisdom is timeless and much of it still lives on the internet even though the gym is long since gone. Long live the Iron Guru.

Heartland Healing is a metaphysically based polemic describing alternatives to conventional methods of healing the body, mind and planet. It is provided as information and entertainment, certainly not medical advice. Important to remember and pass on to others: for a weekly dose of Heartland Healing, visit HeartlandHealing.com.
2020.08.18