Home » Heartland Healing » What Happens When You Die 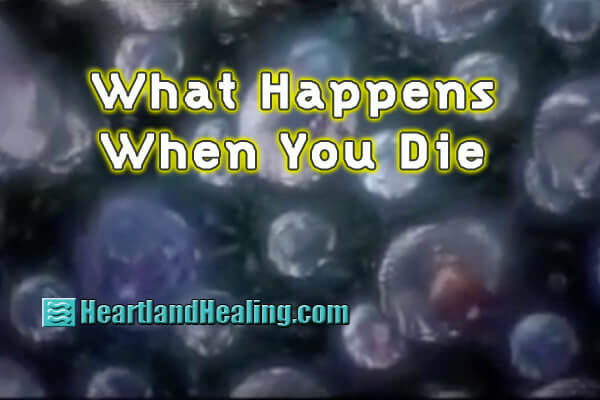 What happens when you die? Well, short answer: nobody knows. But we’re not here for short answers. We want you to think it over. So, let’s start with facts.

You may not want to admit this but it’s a fact that you’re not what your eyes tell you. You’re not flesh, blood, bones and sinew. You’re not even the 100 trillion cells in your body that aren’t in any way “you.” Those flora and fauna that live in the human body such as bacteria, parasites, fungi, yeast — mostly in the gut — outnumber our “human” cells by a factor of ten to one; 100 trillion bugs and bacteria versus 10 trillion muscle, nerve and organ cells.

“Just the facts, ma’am.” — Sgt. Joe Friday But I’m not talking about numbers or cells at all. What you are cannot generally be perceived with eyes. And what you are is still very plainly factual. You are energy. That’s not my idea or theory. That’s just physics and facts. Indisputable. Undeniable. Proven time and again throughout history by Ayurvedic rishis, Egyptian priests, Chinese masters, Greek physicians and modern day quantum physicists. You are energy. That’s the fact. I can’t sugar coat it for you any other way.

Now, you’ve been plodding around most your life (as have I), believing your eyes; that the world and your body that is in it are solid matter. You think you are a body, and honestly, most of the time so do I. We should all be happy to know we are wrong. Why? Because the apparently “solid” things we have come to value so much will indeed change and morph over time and will no longer be recognizable as us. What will not disappear is the underlying energy that comprises what we really are. How do I know that? Simple physics. And like I wrote above, it’s not new.

Have atom. The simplest building blocks of the physical world are atoms. From the beginning, we know that atoms are made up almost entirely of energy. And as we became better and better at observing them, we see that it’s increasingly difficult to find any solid matter in an atom. The result is that present thought, mirroring that of ancient scientists, finds that atoms are entirely energy. Since “you” are made of those little atom thingies, guess what? Yep, you are energy. And energy can neither be created nor destroyed.

There’s a ton of information in movies. Humans cannot avoid translating truth when in a subconscious creative state. I have several favorite movies that uphold the idea that we are indeed energy. So do you. You probably just don’t think about it as much as I do. “Star Wars”, of course. “Defending Your Life,” “Being There,” “Fifth Element,” — the list is endless. And poetry, too. William Blake wrote, “We are led to Believe a Lie, When we see [with and] not Thro the Eye Which was Born in a Night to perish in a Night When the Soul Slept in Beams of Light.”

So, buttons. One of my favorite depictions of what happens when we die is in the 1983 movie, “Brainstorm.” I was especially drawn to the movie’s plot since I was an early adopter of videotape technology in the 1970s. I got my hands on the first portable videotape recorder and never looked back. And within weeks, combining my background in pre-med and my hospital tech job with that, I theorized that combining some sort of neural scan like electroencephalogram sensors and videotape, that we should be able to translate thought into recorded information, sort of like a dream-reader.

In the movie, the scientist portrayed by Louise Fletcher dies while wearing the movie’s device that does just that: records the experience of thought. As she discorporated, the tape records thought energy “bubbles” that dissipate into the Unified Field of energy. When Christopher Walken’s character puts on the device and experiences her death, he is part of the energy field. It’s a pretty awesome (and accurate) depiction.

You see, if we are energy (fact) and energy is persistent and we have consciousness (fact) then why shouldn’t consciousness persist as part of that energy field? I’ll tell you why.

Notice in the second paragraph above that I chose to write “you’re not what your eyes tell you” rather than “you’re not what you think you are”. I wrote what I intended. Because in fact, you are exactly what you think you are. If you think that all you are is the seeming solid matter of bone and flesh, you will find yourself right. We spend most of our time in this illusion believing that all we are is a body. So, thinking that, when we discorporate, we have little ability to coalesce the consciousness we are into the energy field we become part of once again. Basically, what we call death is simply a shift in attention. If we are ill-equipped to maintain body-less thought, guess what? DOA on entering the Unified Field. So, get ready now.