Home » Heartland Healing » You Only Thought You were an Atheist 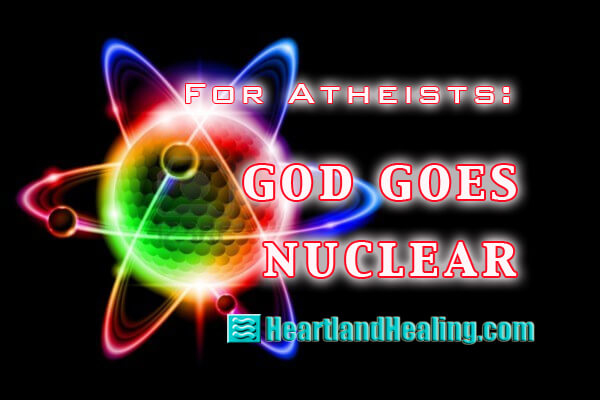 Fervent or faithless, there is a large or small part of our mind that wants to be sure. “Convince me,” it says. Well, allow me. Just briefly suspend your disbelief and get your science on. We will see that humans are entirely energy and the energy that we are has consciousness. We will also see that the Universe is entirely Energy. Why wouldn’t the Universal Energy have Consciousness, too? And we can give It whatever name we choose.

One Course in Miracles lesson reads, “Remember that I am One with God.” Oh, gosh. It sounds so comforting and it’s easy to imagine that aside from the body, on the plane of never-notice, we might truly be One with God. But many times people think that idea is either metaphor or mystical. How could we really be One with God? I mean, look, here’s my body and where’s God? And if we — each of us — is really One with God, then we must be One with each other, yes? And if we are that, then a plethora of platitudes come into play: “Love one another.” “Do unto others…” There is neither loss nor fear if we realize that we are One, that there is no separation, no separateness. Well, science can tell you about that if you let it.

Let science lead you to spirit. Let fact lead to faith. So, let’s get down to it. Fact: As Yoda said, you’re not solid matter, at all. We humans, including our bodies, are entirely made of energy. Indisputable. Science: We are made of atoms. Atoms are made of energy, not matter. Bodies appear to the physical eye to be “solid” but we’re not. Stop, think: every atom has a nucleus with electrons flying around it. Set to scale, tiny electrons orbit the nucleus at a vast distance. One comparison is that if a nucleus were the size of a grapefruit and an electron the size of a grape, the grape would be orbiting over 300 yards away. That’s a lot of space in between. What is in that space? What keeps the grape from crashing into the grapefruit or conversely, running off on its own? Energy! We can already demonstrate that everything we know of an atom is energy. The nucleus itself isn’t solid. It is home to yet other energy spheres. Over the decades we’ve been breaking down these subatomic particles one by one: gluons, leptons, quarks, mesons, bosons and on-and-ons. Where is the solid matter? Right. Energy, energy, energy.

Measured energy. So, done. Our human bodies are made of energy. In fact, all things in the universe are made of energy, not matter. Eventually our science will break it all down and we’ll no longer have a narrow window to believe otherwise. Now comes the fun part about being One.

We’ve been measuring energy since the first caveman stuck out his hand and felt warmth from a flame — or the sun. Our ears measure continuously variable air pressure gradients and convert that energy into sound. Slowly, our ability to measure and identify frequencies and characteristics of energy improved over the millennia. Scientific instruments took the upper hand. Still, two hundred years ago we couldn’t measure electricity. A hundred years ago we had no idea what X-rays were. Cosmic rays? Gamma radiation? Microwaves, the heartbeat of our smartphones? All are powerful forms of energy we had no idea existed until we advanced enough to quantize them. Then there are thought waves. We have just begun to measure them accurately, but they exist. Lesson: just because we haven’t measured something yet doesn’t mean it doesn’t exist. Absence of evidence is not evidence of absence.

What vacuum? Another fact is that space isn’t empty. If it were, we couldn’t see in space. We rely on light energy to see. Every nook and cranny of existence flows with energy. Energy is everywhere and in everything. Starting to get the picture? Like the God of religion, energy is everywhere, in all things. Religion. Science. What’s in a Name? Call it “God” or call it the “Unified Field” — we made up either term. Pick one.

Choose your own word. God (the Universe) doesn’t see separation. The Universe is One to Itself and we are one with the Universe. Anything other than Oneness is outside God’s nature. But being free thinkers, we are entitled to our own thought, even if in error. And we thought: We are separate. And that belief is the energy that causes the appearance of separation.

Science: As kids, we all played with magnets. Turn the horseshoes one way and the magnets connect, become one. The energy field causes oneness. Turn again, reverse the energy and they are impossible to bring together. We humans have created a thought (energy wave) that is the reverse of the Universe. We think things apart rather than together. We see separation because of our belief in it. To be One with God or the Universe and hence with all things takes but reversing the polarity of our belief from separateness to Oneness.

Now, before you accept the following statement, choose whatever word you want for G-O-D. If you’re an atheist, try “Unified Field.” Now say out loud, “I am One with [God].” It is not an esoteric exercise in abstraction. It’s science.