Home » Heartland Healing » You Say You Want a Revolution? 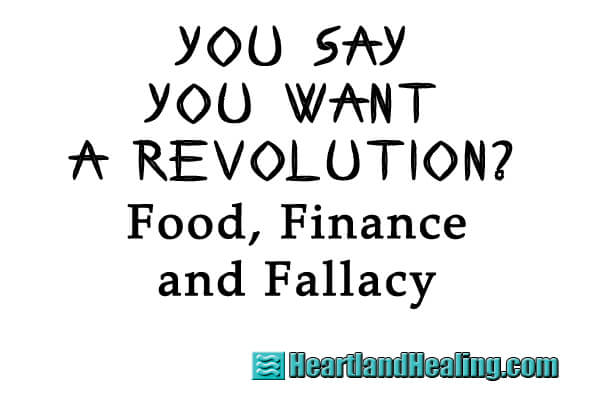 So, you want a revolution? No, Snowflakes and Antifas — not that kind of revolution. This one I’m talking about already started some 70 years ago and is still going strong. It’s called the Green Revolution and its ringleader in the beginning was a Nobel laureate named Norman Borlaug.

Now, by all appearances and history, Dr. Borlaug, was a well-intentioned, socially conscious humanitarian. And since Borlaug died in 2009 at the ripe old age of 95 it serves no purpose to besmirch his reputation. But sometimes human beings make mistakes, even while holding the best of intentions at heart. So it was with Dr. Borlaug.

DuPont, Monsanto, Rockefeller Foundation and Taking Over the Food Sector of the World. Dr. Borlaug was an agronomist, born in Iowa and lived his formative years during the Great Depression. Farms were failing because of drought (and banks) and people went hungry. Really hungry. In the 1930s there was no SNAP program; no welfare checks. No one had to choose between using their government chits to pay their cell phone and cable bill or buying cheap junk food at Wal-Mart. In the Great Depression, people stood in church food lines at soup kitchens or they starved. Borlaug saw this and determined to do something about it. He began to research ways to change the nature of grain crops, specifically wheat. With money from grants, he moved to Mexico where he could develop super-hybrids rapidly because of the climate.

Borlaug chose to work primarily with wheat. Wheat has been an ancient crop since agriculture first arose in human civilization. But Borlaug sought to improve on nature so he selectively hybridized wheat strains. His goal was to make wheat that grew faster, was disease-resistant, was easier to harvest, yielded more seed pods (grain) and could crowd more plants into fewer acres. Hey, it all sounded like a good idea, right? What could possibly go wrong when humans seek to control nature?

Borlaug succeeded in meeting most all of his goals with his new hybrids and of course, those who funded his research loved it. They could now feed the world with their copyrighted grain seeds and exported the technology far and wide. Talk about a “cash crop.”

But there turns out to be a problem. While focusing his intentions on growing more wheat, faster and with better yields, Borlaug, being an agronomist and not a nutritionist (or nexialist or even objective thinker, apparently) overlooked what was happening to the nutritional aspects of the wheat he was changing. What about the actual proteins that were being modified in these hybrids? Proteins, if you don’t know, are the culprit in food allergies and can cause immune system reactions. It’s the proteins in cat dander, the proteins in peanuts and so on that send allergic people to emergency rooms and morticians. One important adage: It’s not enough to realize you can do something. One must consider whether one should do something just because you can.

Itchy Gut. The world is suffering the consequences of what proponents (read: the universities, foundations, corporations) found so appealing about Borlaug’s work. They called it the “Green Revolution.” And in a way it was a revolution. The insurgent mega-corporations were now taking over farming and pivoting from farmer-oriented sustenance food production to corporate-oriented monster farms. And the crops being developed were targeted for production, profit, suitability to the corporate model — anything but nutrition or sustainability. Massive inputs and irrigation were needed for these Frankenfoods. And bear in mind, we’re not talking GMOs. These are simply hybrids that were developed with the wrong goals in mind.

The human suffering comes in the form of allergies and malnutrition on sub-nutrient levels, irritable bowel syndrome, perforated colons and obesity all of which some observers link to foods that have been developed only in the past few years. How can a human body, which relies on the slow, time-honored process known as evolution, keep up with novel proteins and substances in these techno-foods? Answer: It doesn’t.

He Who Pays the Piper Calls the Tune. In addition to the epidemic of food-related illnesses as the result of this misguided revolution, the corporate control of governments and economies by the companies and cabals that financed these rebel scientists is a real problem. We are seeing entire societies collapse in underdeveloped nations on the subcontinent and in Africa that are being force-fed Western technologies directly from the Green Revolution. No, this isn’t a revolution anyone should be proud of and my money goes to betting Borlaug would like to re-think his actions were he able.