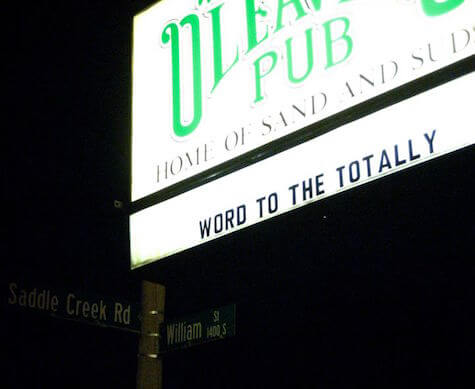 My, how O’Leaver’s has grown. Or maybe “evolved” is a better word.

When the bar, located at 1322 So. Saddle Creek Rd., changed from being a Nascar-loving hole-in-the wall to a pseudo music venue way back in September 2002, no one expected it to be more than a place to host an occasional local rock show. Owners Chris Mello and Sean Conway made their money off the facility’s expansive sand volleyball courts and booze sales to locals looking for a place to escape their dreary lives for a few hours.

But despite only having a sub-par sound system and virtually no stage, O’Leaver’s quickly became a go-to spot for young, hungry indie and punk bands looking for somewhere to play on their first or second tours. Within their first five years of booking shows, the bar hosted some of the best small touring indie bands in the country, including Har Mar Superstar, Bettie Seveert, The Rosebuds, Two Gallants, NOMO, The Silos, Okkervil River, Tristeza, Scout Niblett and Matson Jones as well as local legends like Cursive, Criteria, Ladyfinger, Tilly and the Wall and Little Brazil.

But things really took off in December 2012 when O’Leaver’s was purchased by members of indie rock band Cursive — Matt Maginn, Ted Stevens and Tim Kasher — along with fourth partner Chris Machmuller of the bands Ladyfinger and So-So Sailors. The crew of musicians saw potential for O’Leaver’s to become something more than just a dive bar with a PA.

“It’s good for bands to experience an audience in a smaller room,” said owner Maginn. “O’Leaver’s is a place for young bands to cut their teeth. We can provide them with a good sound and a good experience until they grow into a band that needs a larger space.”

But in addition to being a destination for up-and-comers, O’Leaver’s continues to book the occasional big-name indie band. Recent acts include The Dead Meadow, Matthew Sweet, Beach Slang and Speedy Ortiz, with local monsters Cursive and Desaparecidos slated to play in the coming weeks.

Maginn says O’Leaver’s is a convenient outlet for larger touring bands looking for “an underplay.”

“An underplay is when you’re not confident that you’re going to fill a big room,” he said. “Bands want a smaller room because the experience is going to be better than playing an enormous empty room — for both the band and the audience”

The club’s sound system now includes 32 inputs and a digital console that allows for four mixes. “We wanted to put enough power into the system so we could overpower the room if we need to,” said owner Ted Stevens.

That’s because despite pouring thousands of dollars into the club’s sound system, O’Leaver’s still lacks a proper stage and lighting. Instead, bands continue to perform in the corner beneath a plasma TV surrounded by the club’s tattered record collection staple-gunned to the walls as if it was a teenager’s bedroom. Fans walk right up to the bands while they’re performing and stand nose-to-nose with the lead singer. Playing O’Leaver’s is more like playing at a house show than at a formal concert venue like The Waiting Room or The Slowdown.

But O’Leaver’s now offers something those large clubs don’t. Tucked in the building’s basement is a studio of elaborate digital recording equipment used to capture live performances. The project, called Live at O’Leaver’s, is focused on recording as many live shows as possible for posting on the club’s website, liveatoleavers.com.

Maginn said the effort is sort of cross between the popular Daytrotter sessions (recorded at the Horseshack studio in Rock Island, Illinois, which have become a staple for touring indie bands) and the legendary Peel Sessions that were recorded by BBC Radio host John Peel.

“We were looking for a way to help bands that choose to play at our place so they’d have something after they leave the building,” Maginn said. “The recordings also give us something we can use to promote them when they come back, and something bands can share with other venues when they outgrow us.”

O’Leaver’s sound engineer Ian Aeillo said typical live sessions have between 10 to 12 recording tracks, with some boasting as many as 18. Aeillo has been archiving the live recordings for two years, and only recently launched the website with sessions by more than 70 bands including Cursive, J Fernandez, Big Harp, Bob Log III, Planes Mistaken for Stars, The Kickback, Orenda Fink, Simon Joyner and the Ghosts, Twinsmith, Matthew Sweet, Iska Dhaaf, Deleted Scenes and Digital Leather.

“We have 10 hours of music online right now,” Aeillo said, “with another 30 hours ready for posting and 50 hours waiting to be mixed.”

“We’re looking for partnerships with other websites and publications to get the music more widely heard,” Maginn said. “It provides exposure for these bands and for the venue.”

But that’s not the only improvements that O’Leaver’s has undergone. Late last month the club added another feature no other music venue in Omaha offers — a first-class outdoor beer garden.

The project began when O’Leaver’s purchased the property directly behind the building in May 2014. The enormous patio includes long wooden benches covered by a massive pergola structure, gorgeous landscaping, a glistening new bar and something that O’Leaver’s has always been missing: clean, fresh bathrooms that haven’t been covered with graffiti (yet).

For long-time bar patrons, the beer garden was a shocking surprise hidden just beyond an exit door. Or as one patron put it, walking out to the new beer garden from the dark confines of the main bar was like entering Narnia.

Initial plans call for staffing the outdoor bar Friday and Saturday nights and “whenever it makes sense.” They’re still figuring out if — or how — they’ll use the space during the winter months.

“We’ve definitely been eccentric in our business choices,” Stevens said. “When we started putting the beer garden together people thought we were out of our f—-ing minds.”

“We liked the idea of expanding,” Maginn said. “We’re trying to be smart with our decisions, but right now, we’re just trying to make O’Leaver’s a place that we love.”

Here’s a list of upcoming shows at O’Leaver’s. Cover is typically $5, though some shows (such as the sold out Nov. 22 Desaparecidos concert) fetch higher prices. For more information, go to liveatoleavers.com

Nov. 7: Holly Golightly, Simon Joyner and the Ghosts, Those Far Out Arrows. $7