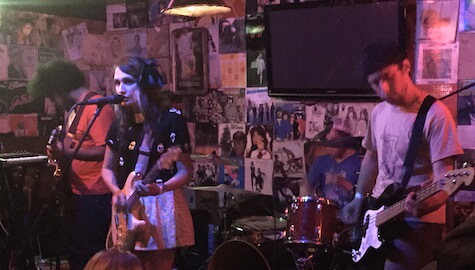 Someone recently told me that indie music is dying.

The genre just ain’t popular no more ’round these parts, he said. No one goes to indie shows, which are becoming fewer and fewer in number. We’ve all moved on.

The first thing that crossed my mind when he told me about indie’s demise was “Maybe he’s right.” When was the last time that I went three or four weeks without going to a rock show at either The Waiting Room or The Slowdown since those clubs opened in 2007? Maybe never.

Take a look at the gig calendars for One Percent Productions and The Slowdown and you’ll notice a lot of days are filled with pub quizzes, movie nights, even (believe it or not) professional wrestling events, instead of touring indie rock shows.

These days local bands, cover and “tribute” acts comprise a large share of shows at Reverb, The Waiting Room and Slowdown along with clubs in the Benson district. When out-of-town acts are booked, they’re often pop acts, Americana/roots/blues bands or hip-hop crews. Why? Maybe those shows draw the biggest crowds. Hey, you can’t blame promoters and club owners for wanting to make a buck.

But on the other side of the indie-is-dying argument is the Maha Music Festival — the annual indie-rock concert held at Stinson Park in Aksarben Village —  which in 2015 for the first time officially sold out. If indie music is dead, no one bothered to tell the thousands of folks who showed up to hear Modest Mouse, Speedy Ortiz, Purity Ring, Alvvays and The Good Life, among others.

Then there’s the fact that 2015 was the best year for indie rock releases in my recent memory. In fact, two of my favorite record labels enjoyed a comeback of sorts in 2015.

First there’s Matador Records, the label that defined indie in the ’90s with such acts as Pavement, Liz Phair, Yo La Tengo, Guided by Voices and Jon Spencer Blues Explosion. There was a time when you went to the record store and bought whatever was on the shelves with a Matador insignia — sight unheard. Then sometime around the beginning of this decade Matador fell off the radar screen. This year the label came back strong with some of the hottest releases of 2015 from Kurt Vile, Algiers, Belle & Sebastian, Savages, Car Seat Headrest and Ceremony.

Then there’s Saddle Creek Records, which had boasted solid releases from The Mynabirds, Twinsmith, Icky Blossoms, The Good Life and the biggest act the label has signed in years, Hop Along, whose Saddle Creek debut, Painted Shut, is included on just about everyone’s end-of-year lists (Including ranked No. 5 in 2015 by Paste Magazine). Welcome back.

My conclusion: Indie rock isn’t dead, it’s simply suffering the same fate as, well, our economy. We live in an era when the separation between the haves and the have nots has never been greater. You’re either super rich or just trying to get by. The same thing can be said of the music industry. On one hand you’ve got Adele selling 5 million albums; on the other, you’re lucky if your band can scrape up enough cash to go on tour. The streaming age has created a vast gulf between the big money bands and everyone else, which may explain why there’s fewer indie bands touring, but doesn’t explain why fewer people are going to indie rock shows in Omaha.

Maybe indie is headed back where it came from — underground. With the big rooms booking pop and cover bands, small venues are trying to pick up the slack. Milk Run opened this year specifically to host up-and-coming and small touring indie acts. Lookout Lounge is stepping up with important indie shows like the recent Car Seat Headrest and upcoming Titus Andronicus shows. Then there’s O’Leaver’s, the old standby given new life thanks to visionary new owners, a first-class sound system and a new beer garden that’s an oasis in midtown. When it comes to indie, maybe smaller really is better.

That said, here are my favorite albums of 2015, in no particular order:

Desparecidos, Payola (Epitaph) — Conor Oberst and his rag-tag crew rage against the machine as only they can. Anyone following the band already has heard the best tracks on the album, since most were released as singles over the past few years. Taken as a whole, the record is a solid collection of fist-pumping anthems as vital now as when the band first emerged in 2001.

Courtney Barnett, Sometimes I Sit and Think, and Sometimes I Just Sit (Mom & Pop) — Barnett’s music, while singularly its own, owes a lot of its resonance to ’90s indie rock, from Cobain to Phair. The song structures are deceptively simple, the guitar riffs hook you and Barnett’s lyrics are both clever and introspective.

Sufjan Stevens, Carrie & Lowell (Asthmatic Kitty) — One of his most down recordings, the sound is classic Sufjan but stripped down and simplified, which is appropriate considering the album is a rumination and struggle to understand the death (and life) of his mother. A tough listen, but worth the effort.

The Mynabirds, Lovers Know (Saddle Creek) — Marketed as a spiritual travelogue of her time spent traipsing the globe after touring with The Postal Service, Lovers Know is actually a devastating portrait of a broken heart — one of the best breakup records since Joni Mitchell’s Blue.

Hop Along, Painted Shut (Saddle Creek) — It’s a record identified as much for Frances Quinlan’s quivering, soulful vocals as the songs that are contained on it, whose startling rhythms and riffs epitomize the best parts of ’90s indie rock.

Simon Joyner, Grass, Branch & Bone (Woodsist) — People are saying it’s the best album he’s ever made, and maybe they’re right. This is the first time I’ve felt that songs from one of his albums could be used in a movie soundtrack or would fit into rotation on a radio station — very likely not something Joyner was shooting for when he make the album, but wouldn’t it be a kick in the head?

Digital Leather, All Faded (FDH) —  The 11-song collection is the most realized, best sounding Digital Leather album since 2009’s Warm Brother.  As with past recordings, it relies on old-school synth sounds that recall acts like Gary Numan, Devo and, maybe most surprisingly, The Cars. And it’s loud as f***.

Father John Misty, I Love You, Honeybear (Bella Union/Sub Pop) — Fr. Misty a.k.a. J. Tillman sounds like a cross between Grant Lee Buffalo and ’70s-era Elton John mixed with modern-day songsters such as Iron & Wine or Shearwater (though Tillman is much funnier than those two rather stoic outfits). The product is old-fashioned but lyrically in tune with this modern world.

John Klemmensen & the Party, Party All Night (self-release) — A fixture of the Omaha / Benson music scene, Klemmensen lets it all hang out, singing with a brazen honesty rarely heard on modern pop songs.

Domestica, Domestica 3 (self-release) — In the context of modern rock, Domestica is as relevant as any other ’90s act such as Superchunk or even Desaparecidos. If ’90s indie punk is indeed coming back in style, Domestica could stand at the forefront of the revival, because they were there.

And what year-in-review article would be complete without a list of the best live shows?

Sleater-Kinney at The Slowdown, Feb. 13 — Despite taking a few years off the road, the band played as if they’d never left after The Woods came out almost a decade ago.

So-So Sailors at 1200 Club, March 28 — The headliner of this Hear Nebraska fundraiser was ‘90s indie star Matthew Sweet, but it was So-So Sailors who mesmerized the room with an insanely good set of witty, intelligent, urbane songs about love and life from the heart of Nebraska.

Foxygen at The Waiting Room, April 2 — The massive 9-piece barged through a set that epitomized ’70s glam with hints of psychedelic and Motown, playing as if every single member had snorted a Hefty garbage bag filled with Peruvian marching powder prior to the set.

Soft Moon at Reverb Lounge, April 19 — It was dark dance music for an elite leather club circa 1992; the instrumentals were powerful while the songs with vocals were the most accessible and leaned closely to early Reznor territory. Fantastic stuff.

The Rentals at The Waiting Room, May 15 — After the last encore, out came Matt Sharp, this time dressed as a Ghostbuster holding a marshmallow rifle, followed by someone dressed in a Sta-Puff Marshmallow Man costume. Hilarity ensued, along with a dead-on rendition of the Ghostbusters theme.

Laibach at Slowdown, May 22 — The foreign-language songs were the most powerful, maybe because they were the most mysterious and — combined with the goth-synth music — the most disturbing.

Big 50 Birthday show at Reverb, June 3 — What can I say, three of my favorite bands — Son, Ambulance, Wagon Blasters and Lupines — playing a benefit show for Hear Nebraska on the occasion of my 50th birthday.

Hop Along at Slowdown Jr., June 4 — Frances Quinlan’s guttural, scratchy, feral-cat growl of a voice is a thing to behold. It is indeed mesmerizing. So is the rest of this band.

Ceremony at Sweatshop Gallery, July 11 —  In the heat and darkness, frontman Ross Farrar was in his element saying before he started the it already was the best show he’d played in Omaha. The band fed off the heat and energy, and the set boiled with a goth-dance-punk intensity that Bauhaus would appreciate.

High Up at Reverb Lounge, July 25 — Goddamn, Christine Fink is a major talent. I guess you’d expect nothing less coming from Orenda’s sister, but holy shit, she sings blue-eyed soul like she’s been doing it for a decade.

Maha Music Festival, Stinson Park, Aug. 15 — If you put together the strongest line-up ever, you’re bound to draw the biggest crowd ever. That’s exactly what Maha did last year. The only question left after the roar of the crowded faded: How can they top it in 2016?

Speedy Ortiz at O’Leaver’s, Aug. 15 — After playing the Maha Festival earlier that day, the band reminded us with that no matter how much fun festivals may be, they’ll never replace  seeing a band at a small music venue.

Desparecidos at The Waiting Room, Sept. 10 — Easily the best set I’ve seen them play — on edge, angry, musically precise. They performed all the best stuff off their two full lengths in what Oberst said was a record-breakingly long set, even though it only clocked in at just over an hour. If it truly was the last time we see this band on an Omaha stage, they went out with a massive thunderclap.

Head of Femur at O’Leaver’s, Oct. 4 —  Frontman Matt Focht’s voice remains as gorgeous as ever, while the band’s vets surrounded themselves with new blood that represents some of the best talent in the region. It was special.

Sufjan Stevens at The Orpheum Theater, Oct. 28 — Supported by a talented four-piece on keyboards, strings, horns and percussion, each song slowly built to a full-on symphonic rage that came back time and again to Stevens standing alone in the spotlight. Beautiful stuff, but as the person sitting next to me said, “Doesn’t he have any upbeat songs?”

Low at Reverb, Nov. 12 — Over the course of two decades Low has added more noise, more guitar, even a few pop-fueled moments, but ultimately retained their patented “slowcore” style — stripped down, simple, stark and beautifully dreadful.

Anna McClellan at O’Leaver’s, Dec. 3 —McClellan in full brassy voice belted out each number like a classic torch singer but draped in flannel rather than lamé, a snapshot of Midwestern melancholy.