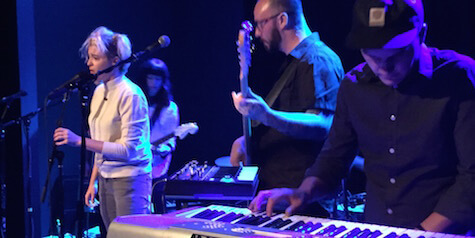 As we do every year in our Music Issue, below is The Reader’s list of top bands in the area as chosen by the publication’s music writers. We did things a bit different this year, allowing writers to list all bands they felt had the biggest impact over the past year based on recordings and live performances without limiting them to a specific number — i.e., they were allowed to list all the bands and not just the top 20. Each band appears only once on all lists.

Tim McMahan’s list of top bands in no particular order:

Icky Blossoms — The electro-dance party band has at its core the trio of vocalist/synth player Sarah Bohling, guitarist/vocalist Dereck Pressnall (of Tilly and the Wall) and guitarist/vocalist Nik Fackler (who’s also a visionary filmmaker), along with a handful of talented contributors. Their sophomore effort, Mask (Saddle Creek, 2015) charted in the College Music Journal top-20.

M34N STR33T — Pronounced Mean Street, the project of rapper Conchance, producer Haunted Gauntlet and DJ Really Real emerged in 2014 as one of Omaha’s central hip-hop projects thanks to the release of its debut full length Mutants of Omaha. The crew combines recorded beats with sound and music collages with a distinctly old school charm.

Simon Joyner and the Ghosts — Longtime Omaha singer/songwriter Simon Joyner continued to evolve his sound in 2015 with the release of his 13th full-length, Grass, Branch & Bone (Woodsist Records), one of his strongest outings in his 20+ career.

BOTH — The hip-hop duo of emcee Scky Rei and producer INFNTLP made a splash in 2015 with the release of their Make Believe Recordings debut BOTHSUCKS as well as live appearances with Desaparecidos and at the 2015 Maha Music Festival.

Desaparecidos — The poli-punk band fronted by Bright Eyes’ Conor Oberst returned to the lime light after releasing Payola (Epitaph, 2015) 13 years after the release of debut Read Music, Speak Spanish (2002, Saddle Creek), sounding as if they never left. The band, which includes guitarist Denver Dalley, bassist/vocalist Landon Hedges, keyboardist Ian McElroy and drummer Matt Baum, played a number of festivals this year including Coachella, performed on Late Night with Seth Meyers, toured throughout the summer and will close out the year with a tour that runs through November.

Domestica — The Lincoln power-punk trio saw its sound evolve when frontwoman/bassist Heidi Ore was joined on lead vocals by husband, guitarist Jon Taylor, on the band’s 6-song EP Domestica 3, an album that carried on legacy (with the help of drummer Pawl Tisdale) that began in the ’90s as the band Mercy Rule.

Sam Martin — First known as the central figure behind Omaha band Capgun Coup, Martin released an endearing low-fi solo album A Notion in an Ocean late last year on Make Believe Recordings. His solo acoustic appearances have pushed him to the top of the local singer/songwriter food chain.

Sucettes — The five-piece retro-garage band is the latest project by one of the city’s most dynamic musicians, Dave Goldberg (Fullblown, Carsinogents). Goldberg is joined by his old Box Elders partner Jeremiah McIntyre, who shares lead vocals with relative newcomer Genie Molkentine , who was last seen on stage with fellow Sucette’s guitarist Todd VonStup in Killer Blow. Balancing out the group is guitarist CJ Olson.

Miniature Horse — The solo project by singer/songwriter Rachel Tomlinson Dick combines her heart-stopping voice with poignant lyrics and gritty, feedback fueled electric guitar that recalls Neil Young as much as 4-Track Demos-era PJ Harvey. One of the hottest new talents to emerge from the Omaha music landscape in 2015.

John Klemmensen & the Party — A fixture of the Omaha / Benson music scene and central member of indie band Landing on the Moon, Klemmensen released Party All Night, his first vinyl LP, in 2015 with his band The Party. On the album Klemmensen lets it all hang out, singing with a brazen honesty rarely heard in modern pop songs.

The Good Life — Formed as a side project for Cursive frontman Tim Kasher in 2000, The Good Life released its first new album in eight years this past August with Everybody’s Coming Down (Saddle Creek Records). The four-piece, which includes bassist Stephanie Drootin-Senseney, guitarist Ryan Fox and drummer Roger Lewis, kicked off a summer tour at the 2015 Maha Music Festival, which will be followed with a West Coast tour in November.

High Up — The soulful, bluesy rock band emerged in 2015 fronted by Christine Fink in the role as an indie version of Amy Winehouse fronting a band that includes sister Orenda and a handful of local heroes including GG Elsasser, Josh Soto, Eric Ohlsson and Jason Biggers. The music is stylish but not too polished, an earthier version of neo-soul that strangely feels grounded in the Midwest.