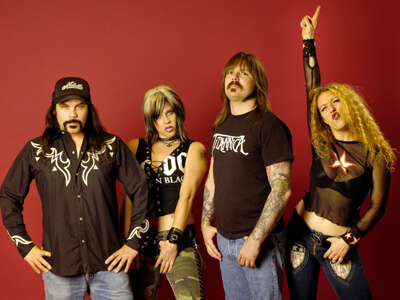 Nashville Pussy and the Dwarves

In the mood for some straight up, shot-and-a-beer rock and roll? Fire up the hot rod and point it towards Lincoln’s Bourbon Theatre this Tuesday, August 16th for the musical right/left of the Dwarves and Nashville Pussy.

The Dwarves are touring in support of their new album “The Dwarves Are Born Again,” another volley in their ongoing bid to offend on all levels. Though their stage shows often have to be seen to be believed, they’re more than a novelty act. There’s a lot to like when it comes to their unique amalgam of rock, pop and punk.

Headliners Nashville Pussy are no strangers to these parts, and their potent blend of southern rock, AC/DC and Motorhead always hits the spot. Be sure to swing by the merch table to pick up a patently offensive Dwarves shirt (I have no idea what the designs are, but it’s a pretty safe bet you won’t be able to wear it to church) as well as Nashville Pussy’s “Live in Rennes,” a full show from 1998 you can only buy directly from the band.

Get there early (openers Moustache don’t disappoint and don’t you want to see what Dick Delicious and the Tasty Testicles are all about? How can that disappoint?) and wear clothes you don’t care about. It’ll be sweaty, messy and loud.

Nashville Pussy with The Dwarves, Moustache and Dick Delicious and the Tasty Testicles