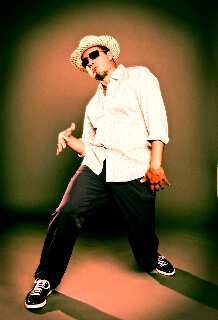 Singer-songwriter-turntable artist SA Martinez is a cog in the successful rock band 311 that started in Omaha 21 years ago and is still going strong today from its Southern Calif.-base. Recordings and national tours keep the group, whose founding members remain intact, a popular draw.

While he’s reached musical heights, SA is not the first professional musician in his family. His father Ernie Martinez and late paternal grandfather Jose Martinez preceded him. SA feels part of “a legacy.”

“We always loved music. We all did it, sang it, performed, whatever…just always had nothing but great times with music. It was just a constant,” says Martinez.

He has only “vague memories” of his grandfather, but he does have his old mandolin as a link to the man and the music. “I’ll look at the mandolin and wonder just exactly how he came into possession of it and what songs was he playing on this thing.”

Jose Bonificia Martinez emigrated from Mexico to the U.S. in the early 1900s. He worked as a water boy on the railroad in Texas before migrating to Gary, Indiana, where he landed in the steel mills. In Sioux City, Iowa, he worked in a packinghouse and played music on weekends. Ernie marvels that his father learned to play the mandolin, fiddle, upright bass and guitar. Jose met his wife Helen, Ernie’s mother, in Sioux City.

After moving to Omaha in 1930, Jose worked the slaughter house kill floor and played in a band that performed South Omaha house parties. Tired of the dirty, dangerous, backbreaking kill floor, Jose became a hired hand for a livestock producer in Gibbon, Neb., where Ernie and his siblings grew up. Jose found a measure of fame fronting his own band, The Kid and His Friends, on a live show broadcast by KGFW radio in Kearney, Neb. and sponsored by a feed store. The signal reached deep into the Platte Valley, bringing the band new gigs at festivals and fairs.

By the early 1950s Ernie began gravitating to music himself. “I listened to a radio broadcast out of New Orleans coming from the Roosevelt Hotel every Friday night — Tony Almerico and his (Original Dixieland Jamboree All Stars) band.”

Ernie learned to play “off the radio” — “I’d get the note from the first chord they played and I’d go from there. Somehow my dad had acquired an upright bass from a traveling salesman and he built me a little stool and I’d jump up on that stool and start messing around with my fingers, thumping away. Then he’d take me down, put the bass away and he’d show me a few chords on the guitar.”

Fast forward three decades later and Ernie, by then a journeyman jazz guitarist with local house bands, had a little SA around his music.

“We’d sit down on occasion and he’d try to teach me something, but he didn’t honestly have any patience when it came to instructing on an instrument,” says SA. “I remember setting his stuff up in the basement and kind of tooling around on it and just having fun.”

“Come the weekend he was getting ready to go play somewhere. I just remember that whole era of the ‘70s — the polyester suits, the jewelry, the cologne. Before he’d go out he’d pat my face with some cologne.”

Ernie, who worked a regular job at a truck line, gigged at night spots. SA came to respect his old man’s chops. “My dad played bass growing up but he’s really a better guitarist and the style of guitar he plays is very wide actually. He can play like the Wes Montgomery, really dope jazz chords — cool and rich sounding — and then he can bust into some cool folk Mexican stuff. He definitely has a pretty deep memory.

“He had a couple buddies who’d come over from time to time. Johnny Vintore played keyboards. Another guy by the name of Charlie Davis played trombone. Just really cool dudes with loads of talent.”

SA never saw his dad on stage, but often witnessed him practice or jam at home. He also absorbed the jazz tunes his pops spun, instilling an appreciation for the standards. Together, they “listened religiously” to KVNO radio’s Primetime Jazz hosted by Bill Watts

Immersed in music at home and at school, where he played viola and trumpet and sang, SA was destined for a life in music. “It’s weird, I always kind of knew in the back of my mind something like that would surface for me, I just didn’t know when or how.” 311 took off in the ‘90s here at the Ranch Bowl and the Peony Park Ballroom. He ascribes the group’s unusual longevity to “chemistry” and “just hard work.”

Last July, 311 had its first homecoming show in a long time when it played the Red Sky Music Festival at TD Ameritrade Park. SA says entertaining family and friends after a show like that is more draining then the concert itself. “But it’s a lot of fun.”

His parents return the favor by visiting him on the coast, where father and son always find time to play a few licks. SA invariably breaks out the old bass his dad owned.