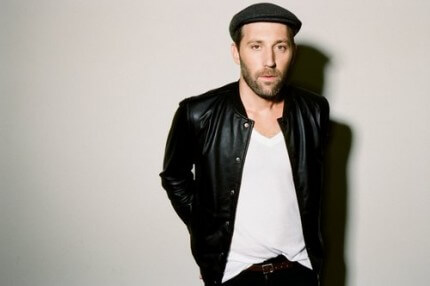 Mat Kearney set his acoustic guitar aside during the songwriting sessions for his new album, Young Love.

The Nashville-based Kearney instead created tunes by starting with programming beats and grooves on a computer, then building songs around the rhythmic skeleton.

“It’s probably not the most traditional album I’ve ever made,” he says.

Kearney says it can be paralyzing to create songs with only an acoustic guitar. This time, he drew on a hip-hop production influence.

“Songs would be born out of me dancing around the room to a groove,” Kearney says. “It’s actually incredibly exhilarating.”

He says starting with the dance/hip-hop beats brought a different way of writing music and telling stories. He was working with a fresh perspective.

“You have a whole new avenue to create something with,” Kearney says.

“Hey Mama”, the album’s lead-off track and first single, kick-started Kearney’s fresh approach. It began with a small fight he had with then-girlfriend Annie. The chorus came to him when he went for a walk.

He got home, programmed an 808 kick drum beat, recorded some hand claps over it and built a groove from there. Soon, the song was finished.

“It was so easy and it was so visceral,” Kearney says.

In part, the song declares “Singing, hey mama, don’t want no drama/ Just a kiss before I leave/ Hey lady, don’t say maybe/ You’re the one that I can believe/ Hey lover, don’t want no other/ Finger for my ring.”

Kearney says Annie thought the song was cute. An engagement soon followed and they are now married. Thoughts of love and innocence, lost and found, shaped much of the songwriting, guided by Kearney’s journey as his romance with Annie blossomed.

“That whole journey was happening around me while I was writing the record,” he says.

Kearney says being serious about life with another person forced hims to deal with some of the defense mechanisms he had developed. Living diminishes one’s sense of innocence.

“I think you learn how to distrust,” he says.

All the outside events of life, love, relationships and family all can lead to being hardened, and not in the most positive ways, Kearney says.

“Laying yourself out there for someone to see you is a terrifying but beautiful experience,” he says.

Kearney says he plays out his own experiences on Young Love, writing painful, but hopeful songs. There’s a certain amount of risk in telling those stories, he says, adding that he only knows how to be honest about the people in his life.

The record wraps with “Rochester”, a sung from the perspective of Kearney’s father. It tells of an abusive father, Kearney’s grandfather, who also ran illegal gambling interests in New York.

While working the album, Kearney’s contract with Aware Records was transferred from Columbia to Universal Republic. He says the process was a little nerve-wracking, but he enjoyed the feeling of being freshly signed.

“It was exciting to be the new kid,” he says.

The album was recorded in and around Kearney’s home of Nashville. Robert Marvin, who collaborated on Kearney’s breakthrough Nothing Left To Lose in 2006, returns on Young Love.

“It was just us again, back in his room,” Kearney says.

The previous album, 2009’s City of Black and White, was a full-band, professional studio concoction that Kearney says was overwhelming. He didn’t want to repeat that process.

“I was really hungry to take a step back and go back to how we kind of began,” he says.