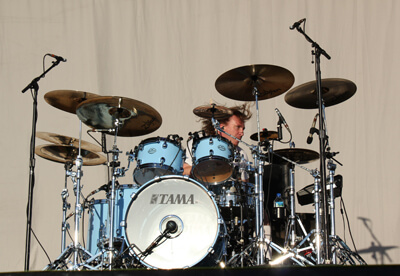 Just a little over a year ago 89.7 The River put on a show in Pacific Junction, IA, called Knotfest featuring Slipknot, Lamb of God, Deftones, and more. Backstage Entertainment had their first interview with Deftones on that day with lead singer, Chino, and drummer, Abe. Now, Deftones come back to the Omaha area on October 22nd on the Hail to the King Tour with Avenged Sevenfold and Ghost B.C.

The show will be held at the CenturyLink Center in downtown Omaha which is a great venue for a show like this. Recently, Jeremy Lafrentz from Backstage Entertainment spoke to Abe Cunningham from Deftones in a phone interview to talk about the upcoming tour and their stop in Omaha. When we asked him about this tour, we talked about what he’s most excited for while touring with Avenged Sevenfold and Ghost B.C. Abe told us, “We’ve toured with just about everyone and have made a lot of friends. It’s quite an interesting opportunity (talking about this tour) and I’m sure it’ll be a killer tour.”

Their most recent album, “Koi No Yokan,” was released late last year and when we asked Abe if he prefers playing new material right after the release or at this point as the album has matured a little more he mentioned that there’s an advantage to both. Abe says, “It’s always great to play new stuff, but it’s obviously great once people have had a chance to take in the music. I’m just stoked that people are diggin’ our stuff.”

Make sure to check out the link below for  the full interview with Abe. Also click here to get your tickets to the show on October 22nd at the CenturyLink Center in Omaha, Nebraska!