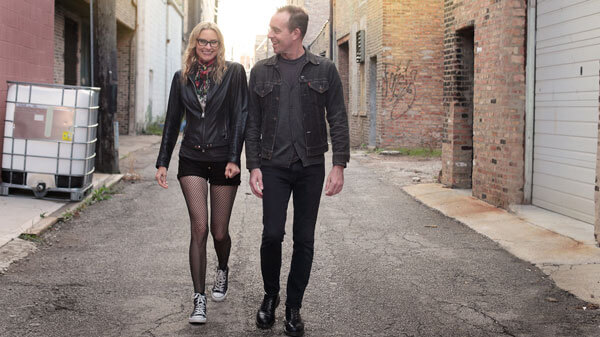 Maha Music Festival-goers may not have heard of The Both, but they probably know one or the other who make up the stellar duo.

The Both is Aimee Mann and Ted Leo, together.

Mann made her first splash as the lead singer of post-pop band ‘Til Tuesday, whose smash single “Voices Carry” charted in the top 10 in 1985. She went on to helm a solo career in 1990, enjoying mild success with her first two albums until emerging again when director Paul Thomas Anderson recognized her personal, aching music would be the perfect centerpiece for his 1999 breakthrough film, Magnolia. During one of the film’s pivotal scenes, characters played by William H. Macy, Phillip Seymour Hoffman and Tom Cruise (among others) take over the vocals on her song “Wise Up” – a moment guaranteed to choke up even the most stone-hearted.

Ted Leo is an indie-rock staple in his own right, with a career that goes back to the late ’90s as a member of Indiana band Chisel prior to forming Ted Leo and the Pharmacists in 1999. Known for quirky, kinetic rock songs that border on punk thanks to their to speed, attitude and blazing guitar lines, Leo released records on well-known indie label Touch & Go before moving to Matador Records with 2010’s sublime The Brutalist Bricks.

Mann and Leo spent a few years touring together as solo artists before joining forces in The Both in 2013. The product of their liaison is their self-titled debut, released on Mann’s SuperEgo label, that ratchets down Leo’s hyper-pop while ratcheting up Mann’s serene heartbreak. The duo perfectly compliment each other both vocally and as songwriters. If you’re a fan of either, you’ll love The Both.

We caught up with The Both via a bi-coastal phone bridge, with Mann in Los Angeles and Leo in New York City.

Now that you’ve been playing as The Both on stage since April, is it everything you dreamed it would be?

Mann: It’s pretty fun, I’m really into it. I just think Ted is a very innovative guitarist and super fun to be with on stage. He’s really funny. With me on bass and touring drummer Matt Mayhall, we’ve become a tight little unit.

Leo: I’d just like to hear Aimee say more stuff about me (laughs). I feel the same way. We spent so much time on the road together before actually creating this band, we know each other’s personalities and how to bring out the music we’ve been collaborating on. It’s a pretty joyful experience.

Do you feel like you’re creating something new with a new fan base or are you building on the fan bases you’ve generated individually over the years?

Mann: My feeling is that it’s a new audience. Maybe I’m basing that on not getting calls for individual solo stuff (which) I would have expected if it were just fans of mine or Ted’s in the audience. People are really coming out to see the band.

Leo: There was a small handful of fans on the first leg in the spring who seemed to be there to see one or the other, but that was a real rarity. The much greater percentage of the audience seems to be really engaged with the songs of The Both, which was really gratifying. The first night we played during the week the record came out, people were singing along to the songs.

During the songwriting process, were there times Aimee when you heard something Ted was working on and said, “OK, you have to throttle that back” and conversely, Ted, were there moments listening to Aimee’s stuff where you said “OK, we’ve got to bring this up”?

Leo: First of all, I actually find myself in a position of pushing back on the idea that what we’ve done musically has been so on the other side of the spectrum from each other. I’m not saying we exist in the exact same space, but there’s more overlap than people give credence to. Because of that, I never felt I needed to ask Aimee to ramp something up, in fact some of the more upbeat songs on the album started with Aimee and slower ones started with me. The fun part of this project is exercising the songwriting muscle and working together.

Leo: The loudest, peppiest song is “Volunteers Of America.” The original melody came from a 5 a.m voice memo of mine to remember the melody, but the pace and energy of song came from Aimee running with it.

So what are we getting with this concert? Will we be hearing some Ted Leo songs and some Aimee Mann songs along with stuff off the new Both album?

Mann: Mostly our band songs, but a couple of Ted’s and mine will augment the set.

Leo: This being a festival, I don’t think we get the entire length of our headlining set. so we might have to do some edits here or there.

You chose to release this record on Aimee’s SuperEgo label. Aimee, your role as a stalwart of independent artists is pretty well known. Still, did you completely discard the idea of offering this to a major or mid-sized indie label?

Mann: We initially were talking to Matador, Ted’s label, about releasing it, but their release schedule was so heavy they’d have to delay it by a year and we were impatient to get it moving.  One of the fun things about this project is we did it really fast; we didn’t want that usual thing where you start writing and four years later the record comes out. The record was out a year after writing the first songs.

Aimee, I think you were ahead of your time creating your own record label. Did you see the erosion of the majors on the horizon when you formed it in 1999?

Mann: The only reason I wanted to put out my own records was I was tired of dealing with major labels. It was always the same arguments and energy spent to get people at the label to do the jobs they’re suppose to do — promote the record or get it to radio or whatever it was. It was just a real waste of energy. I dealt with a lot of people who didn’t like music or weren’t music fans. It was disconcerting.

What do you think of efforts like Kickstarter for funding a record?

Leo: I’m of two minds about it. In some ways it puts power back in your hands to get something to an audience that wants it, but at same time it’s a shame that it has come to this. The fact is Kickstarter exists because people stopped paying for music. It’s a work-around, but I don’t think it’s an ultimate solution.

Mann: I don’t think there is a solution to that problem. Some things just die out and don’t come back.

Aimee, I have to ask a two-part Magnolia question: 1) What did you think when PT Anderson had the characters sing the lines to “Wise Up,” and 2) what did you think the first time you saw it in the finished film?

Mann: I was very skeptical. It sounded like the acting would look bizarre or ridiculous. (Anderson) said ‘Just be quiet and watch.’ I saw it and it was a weird, amazing, magical moment. It was surreal and heartfelt in a way that makes sense. (Magnolia) is a real interesting movie to me because all the surreal things are presented in a realistic way and all realistic events are surreal.

Have you ever considered doing another soundtrack?

Mann: That offer was a once-in-a-lifetime situation. They have music directors for movies that choose the music. Not a lot of directors are that involved.

So how is The Both going to impact your respective solo careers?

Leo: We’re both engaged in this project and will continue to do it. We’re working on new stuff.

Mann: We’re still pretty excited about it and looking forward to writing more songs and writing a musical together with playwrights.

How’d you get involved with the Maha Music Festival?

Leo: We got involved because they asked us to play. I’m excited to come back in this context. It’s been awhile since I’ve been to Omaha, plus I have a friend who just opened a new restaurant there called Modern Love.

Mann: I love playing outdoor shows and playing festivals, and I’ve heard nothing but great stuff about this one.