Home » Music » All Good in the Hood 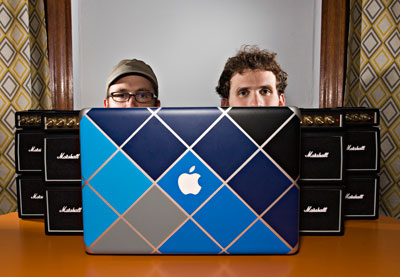 The massive resurgence of electronic music in the past few years has spawned blog after blog offering free mp3s and mix tapes. Since Girl Talk’s 2006 Night Ripper , the mash-up phenomenon has quickly littered the cyber-world. Steve Reidell, otherwise known as STV SLV (pronounced Steve Sleeve), is one-half of the Chicago-based production duo The Hood Internet. Along with Aaron Brink, or ABX, Reidell launched The Hood Internet website in 2007 locking “crunk” rap and indie-rock closer together than Lil’ Wayne and Rikers Island. “When we put up The Hood Internet website, we were just like, ‘Oh this is something the internet scene is ready to stumble upon.’ We had no idea it would have the reach it ended up having,” Reidell says. “There was no real thought put into it. We just thought we’d make some tracks sampling Broken Social Scene, The Shins — stuff we liked — and then throw it up there. The response was overwhelming.” The success of the website even surprised the masterminds behind it. Brink and Reidell thought it would simply be a hobby of theirs. After all, Reidell had a full-time job at Chicago’s Metro/Smart Bar and Brink was holding down a demanding professional career. The Hood Internet was just something they did on the side. “I didn’t see this coming at all. In our first year, our website kept overloading our allotted server capacity. It was super encouraging. The first couple years, we were really churning out the beats,” he says. “The portability of recording software is amazing and that made it much easier.” Years into the project, The Hood Internet has its sights on much more than their blog. While they will continue to make new mash-ups and put them on the site, their focus is on production and a new LP they have been working on for a long time. “We wanted to take the idea of what we did with The Hood Internet and apply it to making new songs. The BBU guys from Chicago were bringing Das Racist into town to record a track to together,” Reidell explains. “We made a beat for that song, ‘Please No Pictures.’ Then this new thing we did with Freddie Gibbs, Ninjasonik and Class Actress are all super indicative of what we’re going to be doing with this record we’re making. “We have a bunch of pieces of these songs we’ve composed ourselves, at least to begin with, then we pass them on. We get all sorts of different kinds of people involved. There’s this one song on the record where we did a bunch of the synths and drums … Justin from Broken Social Scene sent us some programmed drums that he did for it,“ he says. “Then this band from Chicago, My Gold Mask, does guitar and MC Donwill from Tanya Morgan does vocals for it. It’s all one song. The idea is that it’s a giant collaboration. It’s a big mess, but it’s all coming together and starting to sound cohesive.” With a projected release date for this fall, anticipation is building and it comes across in their live shows. The non-stop, adrenaline-packed sets they pull off span the musical spectrum — from Wu-Tang Clan’s Raekwon, Nate Dogg and Warren G to Toro y Moi, The Doobie Brothers and Daft Punk. Their influences are vast and seemingly unending.ending. The Hood Internet clearly appreciate their predecessors, such as Steinski and Z Trip, who were doing this style of music long before Girl Talk stepped onto the scene. “Steinski is like the godfather of mash up,” Reidell says. “I think Z Trip was one of the only people aware of who Steinski was. He took that stuff and flipped it to an even more popular music level. I’m not trying to lay claim by giving one specific person credit. I’d say a more recent important movement and why people are even interested in The Hood Internet in the first place is the Girl Talk record, Night Ripper ,” Reidell says. “I think he took that notion and made a very updated, hyper, 2006 version of that. That record was so big and I think it reached so many people, people who didn’t even know who Steinski or Z Trip was. There were so many current things on there that it brought the ideas back into people’s lexicons.” As the digital revolution continues to explode, The Hood Internet is adamant about keeping up with it — and keeping the mix tapes coming for free. “It’s been interesting to watch the openness the digital era has provided to us. For any effort against people sharing music for free, there’s always going to be a way around it. It’s nice to see the compromises people come to,” Reidell says. “For us, we give all this stuff away because it would seem really ridiculous to charge for this. The modern consumer really demands that immediacy.” The Hood Internet appears at the Slowdown on Thursday, May 12 as part of this year’s Big Omaha Party at 729 N. 14th St., 9 p.m. Tickets are $10. Visit theslowdown.com for more information.