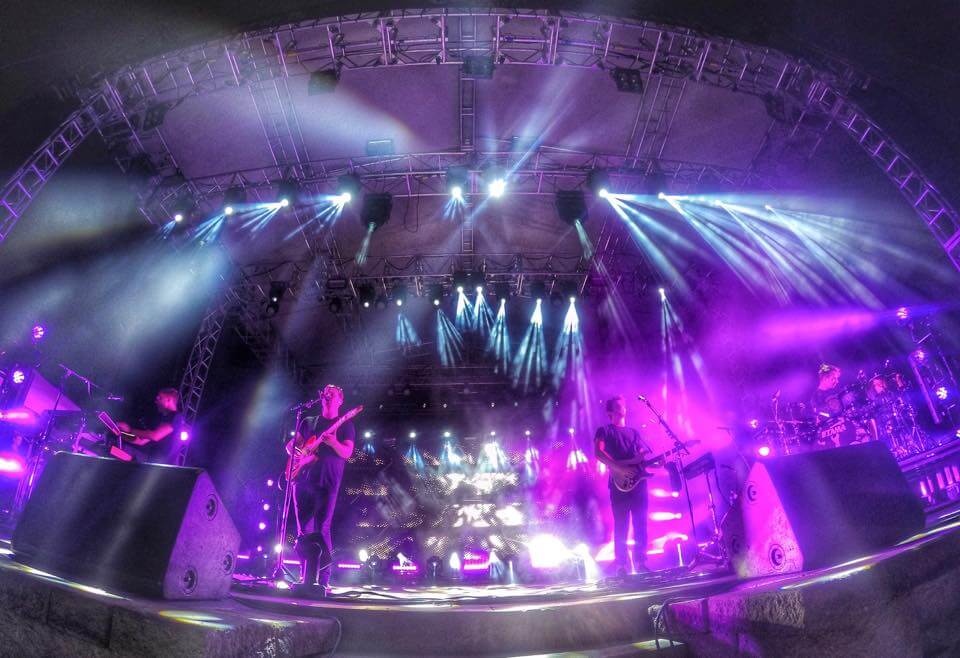 Let me get this out of the way first: I love alt-J. The band, also known as ∆ (the symbol for delta and somehow the adopted favorite shape of hipsters everywhere even before the band showed up), is about the best you can find in weird English indie rock, in my opinion. This was a concert that I as a fan waited for eagerly.

While I can’t say that alt-J took my breath away completely when they played Stir Cove at Harrah’s in Council Bluffs, they certainly had me crooning until I had to draw breath. The band opened with “Hunger of the Pines,” the first single from their 2014 album This Is All Yours and then leapt right into a clear crowd pleaser, “Fitzpleasure.” “Fitzpleasure” represents a lot of what alt-J encompasses: pleasant-sounding cryptic lyrics that upon further review are somber, depressing or disturbing even; foot-stomping energy and a pulse that reverberates and pulls you into trance or frenzy depending. It was this sound, found more prominently in their first album An Awesome Wave, that drew fans in and kept them.

The set was long enough to play the vast majority of both albums, featuring (of course) the most popular titles: “Left Hand Free,” “Tessellate,” “Every Other Freckle,” and the grand finale, “Breezeblocks.” There was also an interlude or two, a journey into “Nara” and then “Leaving Nara,” and a haunting look into gang violence through the melodic “Bloodflood Part I” and “Part II.” In short, if you had a song you liked or even vaguely knew, the band played it.

Through all the chanting, the la-la-la-la’s, the hypnotic swaying, the stunning light show, a few things became apparent. First, that singer Joe Newman’s slightly nasal whine does not translate well to a live setting. His mic was up as loud as any singer could ever ask for, which meant te crowd was subjected to some particularly painful off-pitch falsetto moments but also that it was easy to follow the words. Well, if you knew them, that is. In addition to soaring far too high above his melodic band, Newman couldn’t be bothered much to enunciate lyrics. Maybe it’s because he’s British? However, his pitch problems were almost forgotten when the rest of the band joined in to harmonize on songs like “Dissolve Me.” Almost.

Second, drummer Thom Green is a stellar human being and should put to bed any question that a good drummer is the heartbeat of a good band. Placed up front along with the rest of the band, Green was allowed to shine with a strong presence that kept the beat going and pulses pounding even in the slowest dirge-esque moments.

Third, it mattered entirely where you stood (or sat) in the crowd. Reclining on the back grassy hill, much of the drum and bass were lost, leaving only Newman’s sharp tones to puncture the atmostphere. But if you were to fight (and I use that term lightly because it was an incredibly chill crowd up front) your way forward toward the stage, you were granted the full reverberations and emotion of the show, swallowing you much like “Breezeblocks” croons: “I’ll eat you whole, I love you so.”

Finally and perhaps most importantly, never for any circumstances should an opening act be discounted. Brooklyn-based San Fermin gave a stunning performance with male-and-female vocal stylings of Charlene Kaye and Ellis Ludwig-Leone sounding angelic (especially compared to alt-J’s Newman). Ludwig-Leone has a bass that Franz Ferdinand would shudder over and Kaye sounds like the gorgeous-voiced lovechild of Florence Welch and Enya. The two were joined by a band including a trumpet, violin, and baritone sax that barged into songs in the most charming, groovy, funny way a saxophone can barge into a song. San Fermin is a treasure that has been running through my mind like a jackrabbit, the animal for which their second album is titled. If you do one thing for yourself, let it be discovering them for yourself.