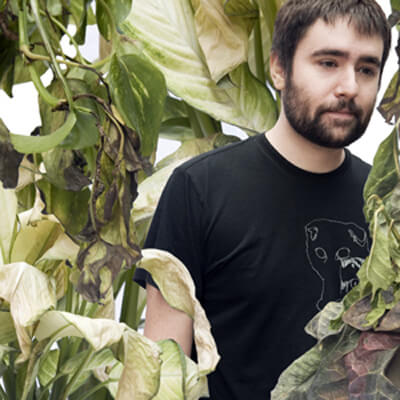 Jimmy Tamborello is best known for his work as a member of The Postal Service, where he teamed with Death Cab for Cutie’s Ben Gibbard and in 2003 released the gorgeous Give Up which is still Sub Pop’s second-best selling record of all time (behind Nirvana’s Bleach). However, he has been releasing well-received electronica records under the name Dntel since 1999 and has been a major contributor in electronic outfits Figurine and Headset. In 2010 he released Early Works, Later Versions (a spirited follow up to his 1999 debut Early Works for Me If It Works for You) and two EPs After Parties 1 and After Parties 2.

Many still consider Dntel’s 2001 longplayer Life is Full of Possibilities a seminal recording in the electronic music world and one of the touchstone records of that movement. Released on the tiny Plug Research label, the record is finally getting the royal treatment it deserves courtesy of a timely Sub Pop reissue. Consisting of 23 cuts, the deluxe reissue should bring Tamborello some younger new fans and also offers a host of goodies for longtime fans who fell in love with the record a decade ago. The set includes five versions of “(This Is) The Dream of Evan and Chan” which was Tamborello’s first collaboration with Gibbard (and has subsequently been remixed by a host of artists including The Flaming Lips) and led to The Postal Service.

“I’m really excited to have it finally come out on vinyl,” Tamborello offers during a recent phone interview as he got ready for the tour bringing him through Omaha. “You know, there’s some outtakes, some remixes and some material I reworked. I’m kind of touring the reissue this time around. I’ve never done a U.S. tour before, so I’ll be playing a bunch of stuff from Life is Full of Possibilities, some other older stuff and then probably move onto some other stuff.”

Dntel is playing its first stateside shows as part of The Soft Alarm Tour alongside One AM Radio and Geotic.

“The set is mostly just me doing my thing,” Tamborello says. “The singer of One AM Radio is going to come out for a couple of songs so that’ll be cool. I don’t dance a lot on stage so it might seem like I’m not enjoying myself but I am. The live show is a little more electronic then the records. It’s more like a DJ set. It’s a mellow dance party, kind of melodic and melancholy.”

Tamborello has done several noteworthy collaborations, including doing some programming on Bright Eyes’ “Take It Easy (Love Nothing)” which appeared on the band’s 2005 stunning Digital Ash in A Digital Urn. “That project really came about because I’m friends with [Rilo Kiley singer] Jenny Lewis,” says Tamborello. “We worked together on The Postal Service stuff and at that time Rilo Kiley was trying to work with Saddle Creek. Conor would come around and the two of us just kind of hit it off.”

Dntel plays Slowdown, 729 N 14 St, on Wednesday August 10 at 9 p.m.. One AM Radio and Geotic will open and tickets are $8 in advance and $10 day of show. For more information or to buy tickets visit theslowdown.com.