Home » Music » Another Year Another Tour in Lincoln, NE 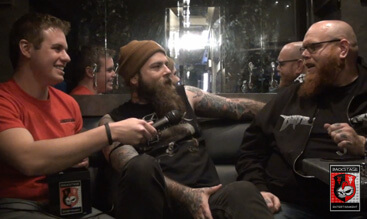 Saturday, February 9th in Lincoln, NE, the Bourbon Theatre hosted the Another Year Another Tour. The tour featured In Flames, Demon Hunter, All Shall Perish, and Battlecross as the lineup of the night. All great bands in metal and each put on a great show for all of the fans. Backstage Entertainment got a chance to speak with members of each band to talk about the tour, most recent album, and have fun with fan submitted questions.

First, we spoke with Eddie and Mike from All Shall Perish. They told us how they are sharing a bus with the guys in Demon Hunter and how that helps develop a relationship with the guys to make a better tour. All Shall Perish’s most recent album, “This Is Where It Ends,” was really put together well and something they can stand behind and be proud of. Eddie and Mike also talked about music piracy and how some of their fans got in trouble downloading their album.

Next, we had the luxury of staying on the same bus and interviewing Ryan and Yogi from Demon Hunter. The band is a Christian band and they talked about how the music industry is different for a band with their beliefs and views. Off their latest album, “True Defiance,” the guys said their recent single called, “My Destiny,” would be a great song to listen to first for people checking out their music for the first time.

After that interview, we went behind the Bourbon Theatre to the back alley where the guys in Battlecross had their van and were getting ready for the show. We did the interview in the back alley and talked to Gumby and Hiran from the band. Their newest album, “Pursuit of Honor,” has had some great reviews and we asked the guys what it was like to get that kind of recognition. They were very humbled and thrilled about it and said it helps them to keep going and make an even better album when they’re ready for new work.

Lastly, we caught up with lead vocalist, Anders, from the band In Flames. On tour in support of their latest album, “Sounds of a Playground Fading,” many fans have asked if a new album is in the works. Anders said they’ve been concentrating on their current record and not one note has been written for the next, but it has been talked about for a possible release next year. We had a chance to interview Anders for the first time in July 2011 and when asked what their biggest accomplishment since then has been he talked about how the band was still together and how well they are friends in the band.

Make sure to check out the links below for our interviews with the bands before the show in Lincoln, NE.

All Shall Perish Interview: http://www.youtube.com/watch?v=9pzInu-tfjI