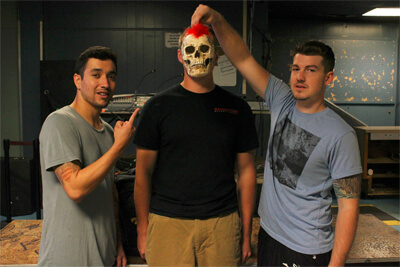 On Sunday, September 16th, Sokol Auditorium hosted a great show with a lineup consisting of The Overseer, The Color Morale, Of Mice & Men, and the headliner August Burns Red. These guys have been around the country on their current tour and were excited about their trip to Omaha. Backstage Entertainment got a chance to talk to three of the bands performing that night and here’s what they had to say.

First, we got a chance to talk to Garret, Justin, Devin, and Ryan from The Color Morale and they were the first band to see the unveiling of the new “BSE Box” that Backstage Entertainment uses for interviews. The box was first introduced during the Vans Warped Tour in Council Bluffs, IA, last year and since the first box got so much use out of it, the new box was unveiled during this interview. The guys talked about their third album, “Know Hope.” Their key message with this new album is giving hope to their fans and having a more positive outlook on life. They were such an inspirational band to talk to and listen to their message.

Next, we talked to Brent Rambler and Dustin Davidson from August Burns Red. We talked about their recent album, “Leveler,” which was released in June of 2011 and the success they’ve had with that as well as their upcoming Holiday album, “August Burns Red Presents: Sleddin’ Hill.” They were excited about the different direction they’re taking with this album and how fans will react to the Holiday songs. Along with talk of their albums, they were the second band to see the new “BSE Box” and they answered questions like, “Do you have sex with fans?” and “What’s one thing in life you’ve always wanted to do?” Brent and Dustin had a great time with the interview and really enjoyed the box of questions.

Lastly, we talked with Tony and Abishai from The Overseer about 30 minutes before they took the stage. They also talked about their most recent album and how proud of it they were. They told us that one critic thought the album sounded like one continuous song but that opinion didn’t matter to them because they’re doing what they love and still have a bunch of support from fans. Tony gave an answer to the question, “What’s the craziest thing you’ve seen a fan do?” and it happened at the Sokol Underground in Omaha during a past show.