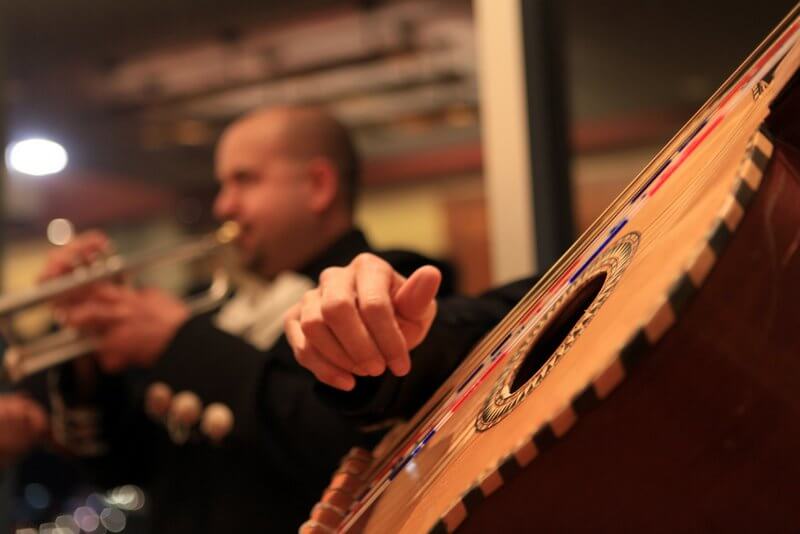 Call it a big surprise.

The Omaha Entertainment and Arts Awards ended its sixth annual awards ceremony Sunday night with an unexpected first, when Galvanized Tron became the first hip-hop or rap artist to be crowned  the Artist of the Year.

The hulking rapper quickly leapt on stage, dispensed a quick, heartfelt thanks and bounded back off stage.

Galvanized Tron performed about 10 minutes before his big win, backed by the live band electronica of Lincoln-based Somasphere. The collaborative nature of the performance was a Grammy Awards-type move, pairing artists together for a fun and interesting collision of two artists that might not normally share the same stage.

Galvanized Tron’s lyrics paired well with the spacey, but propulsive sound of Somasphere.

After a song together, Somasphere took center stage with a song that built up and then grooved on the higher plane, instead of working in more traditional dance music peaks and valleys.

It was the sort of energized performances that would have been great earlier in the show, before some theater and visual arts award winners already trucked home with their coveted glass wedges.

Still, a more refined version of the Omaha Entertainment and Arts Awards ceremony took flight Sunday night inside the ballroom at the downtown Hilton, 1001 Cass St.

The event kicked off with seven-piece Mariachi Luna Y Sol performing songs in the lobby, including Cee Lo Green’s “Forget You”, before they started the main part of the show with “La Bamba” and “Twist and Shout”.

Eventually, the music awards rolled around with the first set of winners leading up to a performance by Best Rock winner Rock Paper Dynamite.

The four-piece band ripped into hooky, but loose-limbed rock songs that were weaned on an equal mix of ’70s classic rock and early 2000s retro rock revivalism offered up by bands like the Strokes and Kings of Leon, pre-stadium rock phase.

The band’s two song mini-set was the first jolt of excitement into a laidback evening and showed a good sense of the band’s growing musical palette. Singer Joe Janousek is evolving as a charismatic and capable frontman and the vocal interplay when his guitar-playing brother Andrew sings back-up is ear-catching.

Tara Vaughan performance was a low-key highlight, as she played a lilting, lovely midtempo song colored with hints of Norah Jones and Ingrid Michaelson. Vaughan played piano, as her three-piece band added a solid backing, complete with a bluesy guitar solo.

There were deft touches in some of the introductions to categories, including a mention of north Omaha’s landmark Dreamland Ballroom, which came as a lead-up to the announcement of the Best Jazz nominees.

Winners had fun accepting awards too. Satchel Grande frontman Chris Klemmensen gave his shades to emcee Katie F-S as he accepted the award for Best Progressive/Experimental/Funk. She also ended up with a scarf left behind by Best Soul/R&B/Gospel winner Lucas Kellison.

A member of the posse that came up to accept the Best Blues award for Kris Lager Band laid down some freestyle rap to say thanks.

Icky Blossoms chose to send up performance artists Pope Trojan II and Dusty Bibles to accept their Best DJ/Electronic Dance Music trophy. The duo, who bend and shape what some would call drag into something more artfully weird, were the night’s most colorfully-attired ceremony attendees. Icky Blossoms are currently out-of-town recording a new album.

The night’s no-show were more expected, as Bright Eyes won Best Album for the 2011 CD The People’s Key.

The night reached a relaxed conclusion a few short blocks away, as BASSthoven and Snake Island! played an after-party at the Slowdown, 729 N. 14th St.

It’s the moments, before, during and after the ceremony, when the OEAAs let the night get loose that the event shined brightest.

Artist of the Year: Galvanized Tron