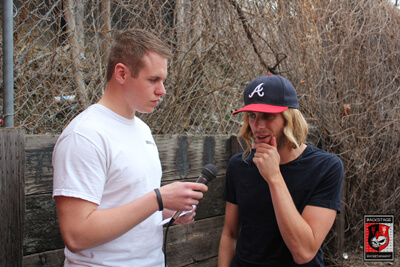 For months now, many Awolnation fans have been anticipating the show that was in Omaha at Sokol Auditorium on April 8th. The band came to town to a sold out venue with support from Mother Mother and Blondfire. All of the bands were thrilled at how well the tour has been going and it was no different that Monday night in Omaha.

The night before Q98.5 hosted Awolnation in their Q Lounge for a select group of fans to enjoy a special set. Due to an unfortunate event, the show had to be cancelled when the radio station and band could not come to terms on a banner that would be hanging behind the band when performing. Aaron Bruno, lead vocalist of Awolnation, responded to the night in an exclusive interview with us. Below there are links to the video taken as staff of the station made the announcement to the fans of the show being cancelled as well as the full interview and clip with Aaron and his response.

Backstage Entertainment also interviewed Ryan from Mother Mother. Ryan was full of insight and was a good sport when he drew his questions from our box and had to do an answer using exaggerated hand gestures. He talked about their recent album, “The Sticks,” and how it differed from their other three studio albums.