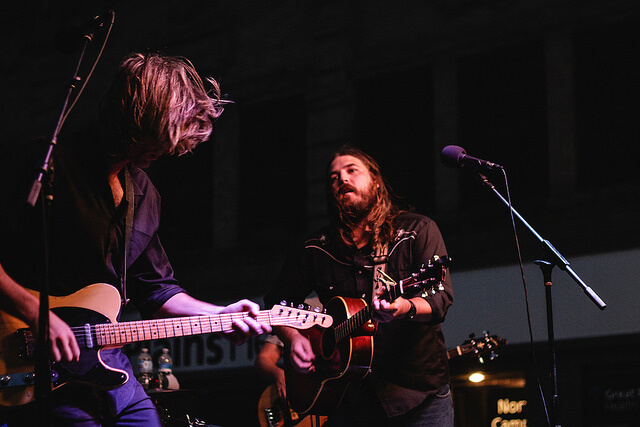 The folks over at Hear Nebraska are truly some of the hardest working, and most dedicated people promoting our local music. Their Good Living Tour is a 9-day event that spans small towns across Nebraska, bringing music to places that may have limited exposure to some of the Midwest’s finest musical acts. Many amazing bands have driven hours to play these shows and have put on some stellar performances to significant audiences.

Having recently played a show with Brad Hoshaw and the Seven Deadlies at their stop in North Platte Nebraska, I realized it was more than just another gig. It was an opportunity to give rural Nebraskans a show that not only highlights Nebraska music, but also their own town. Shows are free and the passion of the artists and event coordinators shines through in each performance. I realized the scope of the project and just how much work went into each gig once I saw the top-notch PA system, stage, and lighting. Plus, just to coordinate the events the crew had to scout out each town ahead of time, get permits, find show locations, promote the event, and deal with all the logistics that come with a large, free, outdoor show.

The day’s events started early with one crew setting up the stage, complete with a full monitor system, lights, banners, and artist support. Meanwhile (at least in North Platte) another crew was out and about, filming a short documentary on the town with interviews from some of its residents. The completed video was played at halftime and I personally was impressed with the quality of production for something that was filmed and edited within hours of the actual event. The audience seemed proud and appreciative of the personal touch it added to the show.

It was after 11pm when the bands finished and there was still a crowd milling about the street in North Platte. This show included 4 bands in a range of styles. Afterward, the audience was happy to interact and get more information on the artists and Hear Nebraska. While we were packed up and ready to hit a local pub, I knew that there were still hours of work for the event crew. The stage and sound/light system had to be completely torn down and packed away for the next show. They would be breaking down and packing up equipment into the wee hours, while we enjoyed a few rounds of pool and cold beers at the bar. The next day, the Hear Nebraska crew would get up and head to the next city to do it all over again.

As a musician, I am truly amazed at what Andrew Norman and his crew at Hear Nebraska are doing. I’ve watched the site go from a simple idea to a Nebraska institution, with nothing but great things in store for the future of the organization and our own music community.

You can find the full Good Living Tour schedule HERE and keep up with blog posts from each event. Next time you attend a Hear Nebraska event, take a minute to appreciate all the behind the scenes work these people are doing. When something is done well, you rarely know all the work that went into it, you just look back and see how successful it was. In this case, I offer up the highest praise. The entire event was well organized by folks who have no problem putting in a full day (and then some) of hard work dedicated to us musicians and the people who appreciate the music our great state has to offer.

Check out coverage of the North Platte stop with photos and crew commentary by clicking HERE.