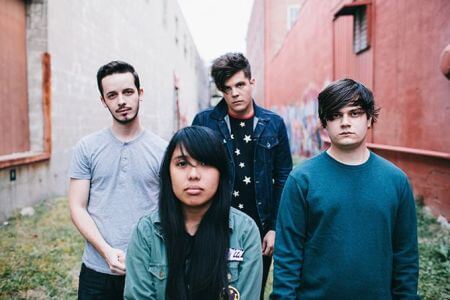 New split EP and tour – Show at the Waiting Room

See Through Dresses are releasing an EP titled “End of Days” and have a show this weekend at the Waiting Room Lounge with Dan Mariska, The Boys Choir, and Bed Rest. The EP will be available in multiple formats including vinyl and cassette for all you alternative audiophiles. It’s also a split with label mates It Looks Sad. Recently, Sarah, Matt, and Alex stopped by the Worlds of Wayne Podcast studio to share a few songs, talk about the record, upcoming tour, and explain how bruises, near concussions, cuts to the face, and headstocks to the crotch are all just part of the dangers of being in a band with Sara. Listen to the interview below and check out songs from both bands.

Gettman and his band are set to release Dichotomy at Slowdown on Saturday, October 10, 2015 to an all-ages crowd with Custom Catacombs and Charlie Alley as support. $5 in advance/$8 day of show.

Dichotomy is a collection of new and old, refurbished songs. Some songs date back to Gettman’s high school years (2010) and are just now seeing light. The biggest difference between this album and his past releases is “my muse has changed.” He started writing more about the world around him and his perception of everything that was going on rather than writing so many songs about heartbreak and relationships.

Gettman on his new release: “There are a lot of fun moments on the album that I think my previous releases lack because at the time I was centering all of my energy on making a very specific, singular point. Dichotomy is an extension of me as a songwriter. It is an attempt to get away from the “sad bastard-esque” persona I may have portrayed in previous releases and move on to something broader and universally captivating.”

Mitch Gettman is an indie/rock/singer-songwriter and multi-instrumentalist from Omaha. He has been writing and recording music since the age of 13 and has now released three full-length albums and two EPs: Worn EP(2010), We Are the Mad Ones (2011), Stop Living Like It’s the End of the World (2014), Nothing Stays the Same EP (2014) and Dichotomy (2015). Mitch was awarded Best Singer-Songwriter by the Omaha Entertainment and Arts Awards in 2014.

Ten years for a band is a good run and Lincoln troubadour Eli Murdock and his iconic Eagle Seagull is celebrating the anniversary of their debut album with a show at O’Leaver’s with a couple of other longstanding bands.  Catch Little Brazil and So So Sailors on this bill and enjoy a night of local music veterans sharing some of the best Lincoln and Omaha have to offer. The new patio at the “Clubhouse” is worth the price of admission alone. The music from these bands will remind you why our slice of the Midwest is one of the best music scenes around.

Eagle Seagull with Little Brazil and So So Sailors