The weather still feels like winter at this column’s deadline, but the calendar says it’s festival lineup announcement season. Nebraska’s two largest music fests came through with contenders for their most ambitious slates yet, both revealing full details within a two-day stretch in mid-April.

In its 10th year, Maha Music Festival is bigger than ever. With the move to a two-day fest on Aug. 17-18, Maha had some extra real estate to book its most well-rounded lineup yet, and the April 17 announcement capitalized with possibly the festival’s most diverse roster to date and 16 acts total. Power pop titans Weezer, whose 12th LP The Black Album is set for a May release, will headline and close the festival. New York art rock band TV on the Radio headline on Friday night, and, perhaps the trendiest pick on the lineup, Father John Misty, rounds out the top of the bill.

Moving down through the undercard, longtime U.K. garage rock two-piece The Kills, art pop duo Tune-Yards, buzzy blues rockers ZZ Ward and Benjamin Booker and folk singer-songwriter Hurray for the Riff Raff will stop in Omaha for the festival. The last of the touring bands include R&B songwriter Ravyn Lenae, noise pop project U.S. Girls and Saddle Creek indie rockers Hop Along (a personal favorite). This year’s locals lineup is expanded as well, with five acts total from Omaha and Lincoln on the bill including The Dilla Kids, Mesonjixx, David Nance Band, State Disco and Clarence Tilton.

General Admission passes for both days are $90 at print time, but that price will jump to $95 before the festival rolls around. Friday only passes are $35, and Saturday passes run $70. The Big Omaha entrepreneurship conference kicks the newly co-oped events off on Aug. 16.

An hour down the interstate, Lincoln Calling announced its first-round of acts for its 15th edition and first in two years without Hear Nebraska coordinating the festival. Lincoln Calling isn’t missing a step this year, though, booking a lineup filled with big-name indie acts.

Lincoln Calling takes place in downtown Lincoln from Sept. 17-22. Tickets are $35, but that price will jump to $40. Find full lineup and ticket details at lincolncalling.com.

* * *As music festival season ramps up, so does the number of spring and summer local album releases, and we’re just getting started.

Maha Music Festival artist and Saddle Creek indie rock band Hop Along released the long-awaited follow-up to their 2015 LP Painted Shut, which boasted strong, folk-influenced rock songwriting held together by frontwoman Frances Quinlan’s vivid storytelling and uniquely raspy vocals. The new album, Bark Your Head Off, Dog, at nine tacks and 42 minutes, sees the band shedding the strictly rock instrumentals and song structures of past releases for more sonic experimentation, adding in baroque and orchestral influences to the band’s new melting pot sound. And despite nods back to the band’s freak-folk roots on tracks like “Not Abel,” Dog is easily Hop Along’s most polished, pop-oriented record yet, with dance-pop drum beats littered throughout and Quinlan rarely accessing her trademark rasp. But the album is the catchiest set of Hop Along tracks yet, while still sounding forward-thinking. If Hop Along has anything to say about the future of indie pop, the dominating fluttering synths and male falsetto vocals will be shown the door and rock instrumentation will return to make indie pop “indie” once again. 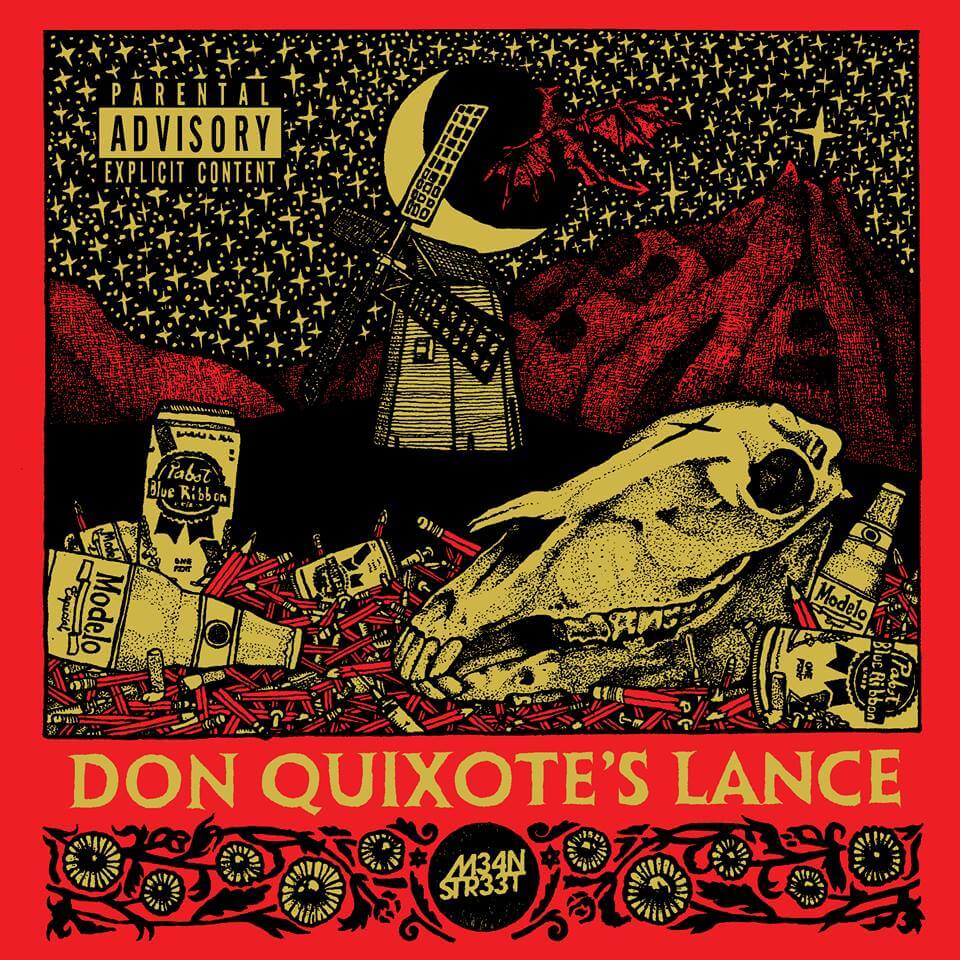 Omaha hip-hop duo M34N STR33T, composed of beatmaker Haunted Gauntlet and rapper Conny Franko, dropped its first full-length last month since 2014’s MUTANTS OF OMAHA. Neither artist has been dormant in those four years, though. Franko’s 2016 LP La Maga was one of the year’s best regional rap albums, and Haunted Gauntlet released a two-hour visual album on VHS earlier this year. But together, the two are an inventive force who — on the new LP, Don Quixote’s Lance — take the typical cloud-rap formula of heavy bass and hi-hats and turn it into abrasive but lyrical hip-hop tracks. Album opener “Yellow Butterflies” launches as a cloudy stoner-rap track with background oohs and aahs cascading down a wall of boom-bap drums. But the distortion and aggression on Franko’s vocals only hint at the song’s monstrous climax, when an earth-shattering bass invades and Franko repeats the refrain: “Still f*** your face and don’t dig the scam. Crab apples suck to eat, so why pick or jam?” Nearly every track is an auditory assault, but it’s never unwarranted. “Mutant Mountain” begins with a sullen guitar line that pervades through the whole song, even when the chorus explodes with more thunderous bass as Conny implores of his partner to remember his sacrifices for her when he’s gone. There’s no distilling the album into a few sentences though — Don Quixote’s Lance carves an untrodden path in Omaha hip-hop and effectively sets a standard for Nebraska rappers for the next year.

Also on the hip-hop spectrum, rapper HAKIM continued his hot streak this month, capitalizing on the success of his January mixtape Young Drifter II with the sequel EP Young Drifter II Reloaded, which sports six cloud-rap-influenced bangers. That production style borrows from the overall zoned-out attitude of the EP’s predecessor, but the tracks still flaunt some of the densest instrumentals HAKIM has rapped over yet. On a cut like “Chips,” haunting synths panning from ear to ear provide the backbone for the chopped-and-screwed bassline and 808s entering and exiting has HAKIM spits. It’s almost hypnotizing how many samples are intricately mixed in each track. And HAKIM’s flows are only getting stronger. On album opener “Horsepower,” he raps nearly half a verse without taking a breath, forcing his voice into an ultra-aggressive delivery he rarely reaches. The track features some legitimately funny bars, too: “I handle beef with prestige, I could never be vegan.” Each release from HAKIM is a step forward in the rapper’s constant push for national recognition, so look for future material to place even more emphasis on experimentation, leading to something truly unique.

Want more Nebraska music news? Keep up with local music happenings at hearnebraska.org and make sure to check out next month’s Backbeat Column.