The number of Nebraska music festivals doesn’t seem to be dropping as the year moves later into autumn. In late September and early October alone, at least four festivals held 2017 editions, from tiny porches in midtown Omaha to capacity crowds in downtown Lincoln.

We’ll start the column by looking back on the biggest Nebraska fest of the last month, and arguably the year, Lincoln Calling, the Hear Nebraska-produced festival which ran from Sept. 28-30.

This year’s downtown Lincoln festival was easily its most ambitious yet, snagging big-time artists like Charli XCX, Beach Fossils and Best Coast. Crowds showed up en masse, packing The Bay for PUP and squeezing into The Bourbon for Angel Olsen.

But the fun didn’t stop at the music. Duffy’s Tavern functioned as an alt-festival venue of sorts, hosting comedy on Lincoln Calling’s last two nights and a drag show on Saturday night. The Bay buzzed with three days of skateboarding competitions leading up to each night’s music. And a number of panels took place throughout the festival, all at either Lincoln’s Nonprofit Hub or The Bay, discussing an array of topics like coordinating a mid-sized music festival and strengthening the music community. For one panel, Greta Kline of Frankie Cosmos joined local women artists like Better Friend’s Meghan Munyon and The Boner Killerz’ Eris Koleszar to discuss representation and empowerment of women in music.

Perhaps the festival’s most satisfying offering was the sheer number of rising and prominent acts all playing shows within a couple blocks of each other. On the Saturday night of the festival, one could easily hit the Night Market stage to catch Lincoln experimental rock four-piece The Ambulanters, then head through the alley to Duffy’s Backlot to watch See Through Dresses, jump across O Street to see the second half of Charli XCX’s set, then end the night at the Backlot again for (Sandy) Alex G and CupcakKe.

Lincoln Calling 2017 was a year in the making, of coordinating food riders for bands, slipping fliers under thousands of windshield wipers and fishing through the hottest up-and-comers to ensure this fest built upon last year’s. For us at Hear Nebraska, to watch throngs of music fans support the scene and cram festival venues on all three nights was validation enough for all the effort and energy.

Another festival took place around the same time as Lincoln Calling, but was held exclusively on porches in Omaha’s Gifford Park neighborhood. 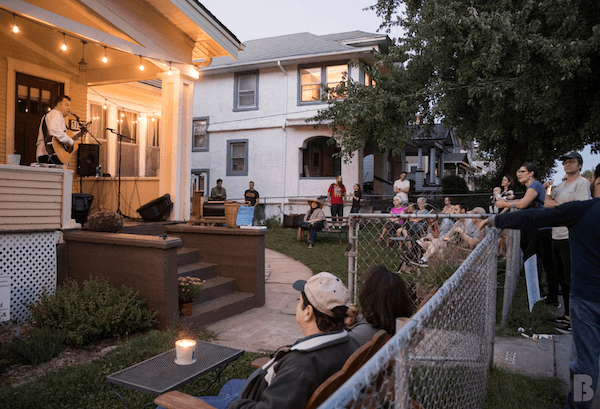 In its first year, Porchfest OMA featured 17 bands on Sept. 29. Five porch stages played to the festival’s namesake with McCarthy Trenching, Jack Hotel and The Shineys topping a stacked folk-and-roots-heavy lineup. While parading through the neighborhood — near 33rd and California streets — one could find a pair of visual artists, three comedians, a poet and a henna artist taking part in the night’s festivities too.

Porchfest got its start in 2010 in Ithaca, New York, aiming to display the local creative community. In the seven years since the festival launched, it has spread to 87 cities — including Lincoln — in the U.S. and Canada.

Festival coordinator Emily Engles said she chose Gifford Park because of its wealth of matured trees and Victorian-style houses with sprawling porches. As the sun set over Omaha, the aging houses and their porches adorned with holiday lights made each harmony and cry of the violin that much more captivating. If Omaha is going to continue holding its own Porchfest, Gifford Park seems like as appropriate a neighborhood as any to act as a venue.

Only a week after Lincoln Calling, The Bay played host to another festival, Queerfest.

From late-afternoon to well into the night, hundreds of fans came together to hear slam poetry from six poets and watch sets from bands like Plastic Garbage, Histrionic and Plack Blague, all with the uniform goal of fostering a positive community uniting and accepting of LGBTQA+ folks and those who may be afraid to express their sexuality.

C Balta, whose band Once A Pawn played the penultimate set of the night, hatched the idea for the festival earlier this year. For Balta, Queerfest was a product of the current turbulent political and social climate and the isolation that can come as a byproduct of being out as a queer individual. But if Queerfest can foster a strong support system, there’s at least one more group that can make the isolated feel included.

“I just hope we can continue to do this,” Balta said during his set. “With all of us being out and being proud and being ourselves, we create a safer community for anybody else who wants to come out and be themselves.”

Also in Lincoln, Sower Records, the folk and roots record label, announced the third annual Sowerfest on Oct. 2. And just 13 days later, the festival took over a food truck-surrounded Antelope Park bandshell to bring the community together and support the credit union movement. The event was sponsored by Young Professionals for Credit Unions, which looks to educate credit union professionals between 18 and 35 years old through seminars and community events, like Sowerfest.

The free event featured a seven-band lineup, mostly of the Americana variety, but kicked off with ska ensemble Mad Dog and the 20/20s and ended with Omaha blues rocker Kait Berreckman. Five other artists — Emily Bass and the Near Miracle, Matt Cox, Will Hutchinson and Sower Records bands The Bottle Tops and Jack Hotel — added their takes on folk rock throughout the day.

October was a relatively slow month for Nebraska releases, but three Nebraska mainstays released new material. The Boner Killerz’ dropped its debut EP, Universe Contest came out with its third full-length and The Dilla Kids surprise released a pair of new EPs, and we’ll reflect on the new albums in this section.

The Dilla Kids’ 2016 musical output was nothing if not prolific, with the project led by Omaha emcees Marcey Yates and Xoboi delivering three EPs last fall. Nearly a year later, The Dilla Kids are back with Like and Colter House Boy, two EPs which, like most of the group’s past releases takes most of its inspiration from the record bin sample-based production styles of Madlib, J Dilla and early Kanye. Tracks like “All In One Night” and “Things to Do” feature instrumentals that sound like they could have been stripped from elevator speakers, while others like “Two Three” indulge in the trap production ruling the airwaves today. And over each instrumental, Yates and his reserved flow trade verses with Xoboi’s hyper-annunciated lyrical delivery. Stream the two EPs on Spotify and Apple Music.

Another Omaha-based band, The Boner Killerz, dropped its debut EP All Boner Killerz / No Boner Fillerz near the end of the month. The riot grrrl trio has quickly become one of Nebraska’s most talked about punk bands over the last year, earning spots on lineups at Benson First Friday Femme Fest, Lincoln Calling and the Nebraska Hardcore Showcase with spirited but pissed-off songs about misogyny and female objectification. Cuts like “Fuck Me or Fuck Off” burn with Sleater-Kinney-inspired vocal interplay while making room for R&B interludes before busting back into post-punk single-note riffing. The Boner Killerz celebrated the album’s release at a Halloween-themed show on Oct. 27 at Brothers Lounge with The Morbs, Muscle Cousins, Domestica and Zero Trick Pony.

Finally, Lincoln indie rock outfit Universe Contest returned with its first album since 2014’s We Are The Rattlesnake. Get Cot Livin’, the new 11-track LP, traverses tongue-in-cheek symphonic rock (“Cooler Full of Babes (Trunks Full of Hunks)”) and suggestively titled country stompers (“Cuntry”). But it’s all held together by the bizarre songwriting approach and the buzzing guitars present in each track. On the production side, Get Cot Livin’ sports the best of any Universe Contest project thus far. “Frank Materializes” shines as up-front I Hate Myself-esque screams command the mix and Jordan Ellis’s violin moans in the background. The tremolo guitar picking at the climax of “Jacket” sounds just as refined as anything Explosions In The Sky has put to record. Get Cot Livin’ boasts three years of attention to detail, and it culminated in some of Universe Contest’s strongest material to date. Catch the band at its album release show at The Sydney on Nov. 3.

Of course, this isn’t all of what happened in Nebraska music over the last month. Head over to hearnebraska.org for our tri-weekly news column, and keep up with music scene events and news all year round.