Home » Music » Backbeat » Kurt Vile is Rollin’ with the Flow 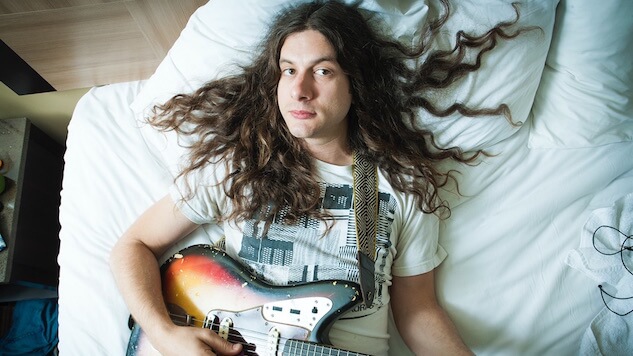 Kurt Vile is back. Actually, Kurt Vile never left. One could argue that the 39-year-old Philadelphia songwriter and guitarist has never been better or more prolific. In the last 18 months alone, he’s done two full American tours, an international tour, and released a collaborative album with Courtney Barnett (it’s called Lotta Sea Lice and it’s definitely worth a listen). Oh yeah, he also just put out his seventh full-length studio album, Bottle It In, this past October.

For the moment though, Vile is resting. “This is the most mellow I’ve been in a while,” he says with a content sigh. “I’m really shell shocked from being out on the road and I feel like I’m catching up on my health. I’m just taking it easy before the start of the tour,” which is only three weeks away.

Though it can be a lot to handle, and the time away from his wife and two girls is never easy, Vile says he really wouldn’t have it any other way. “The alternative would be to work a nine-to-five job and be gone more, really.”  He says he enjoys traveling and being able to fly his family out to locations they might not otherwise get to visit (this year, they’ll be joining him in Australia for a few days on the second half of his tour). “Plus, since b’lieve I’m goin’ down, we’ve had a bus and that’s how we knew that we truly made it,” he adds with a laugh.

As counterintuitive as it sounds, being out on tour is also when Vile does the majority of his recording. He cut Bottle It In at studios across the country with a number of producers including Shawn Everett, who’s worked with the likes of Weezer and the Killers, and Rob Schnapf of Elliot Smith fame. Vile tells me that recording in this scattered style is his preferred method. “It’s just what I’m comfortable with. It’d be interesting to see if I made a record in the same one or two places, but I just haven’t done it in so long. It’s not like I’m recording this perfect album in my head where I record one song on the West Coast, one on the East Coast until I have 12 songs.”

While it may not be a perfect record, Bottle It In, is as good as anything else in Vile’s discography. He describes it best when he says that his music is “deceptively tricky.” There’s a nice balance of laid-back, country-tinged rockers and spaced-out, psychedelic numbers. One moment he might be lazily chugging between two chords and the next he’ll be dazzling you with his virtuosic fingering picking. When all the elements come together, it’s pure poetry. There’s an unspoken yet instantly recognizable characteristic that’s apparent to anyone who listens to Vile’s records. His stream-of-consciousness lyrics, hammers-ons, and breezy strums create an ethereal stew that instantly transports you to a sunny, late spring day where you’re cruising with the top down. It truly is world-class driving music.

The record is also starting to gain a bit of traction in the mainstream. Vile played “Loading Zones” on Jimmy Kimmel Live! this past December and will be appearing on Late Night with Seth Meyers at the start of his upcoming tour. Vile says he is excited to play on Late Night, but that he wants to improve on his Kimmel performance.

“I was definitely excited to go on [Kimmel] and rip a solo, but in my monitors, it sounded like my voice was fighting with my guitar so I didn’t sing or play as good as I could,” he explains. “Next time I just want to be loose and be me. I think a lot of times once people go on TV they think about how they want to clean it up. The next thing you know you’re wearing a suit and doing things you wouldn’t do normally. I think ideally the way you want to be on TV is raw.” He says that this time around, he really wants to shred.

I mention to Vile that I think he’s one of his generation’s best guitar players. He thanks me, but also tries to immediately distance himself from such a title by listing the great guitarists that influenced him: John Fahey, J Mascis, Lou Reed, Sterling Morrison, Stephen Malkmus, Neil Young, and the guys from Sonic Youth (Lee Ranaldo and Thurston Moore). He even throws out a name that fans of Omaha’s music scene will be familiar with. “There’s this guy David Nance, he’s really killing it. He’s raw. He’s a true guitar player.”

I end by asking Vile if he thinks it’s crazy that he’s signed to Matador Records, the same record label that released the work of Stephen Malkmus – both solo and with Pavement – and Sonic Youth, or that he now considers J Mascis to be a friend.

“At first yeah, it was crazy,” he says. “Now I just feel like part of the family.” This makes total sense because even though Vile himself might not be able to see it, he’s quietly joined the ranks of those indie guitar greats and has the chance to rise even higher.