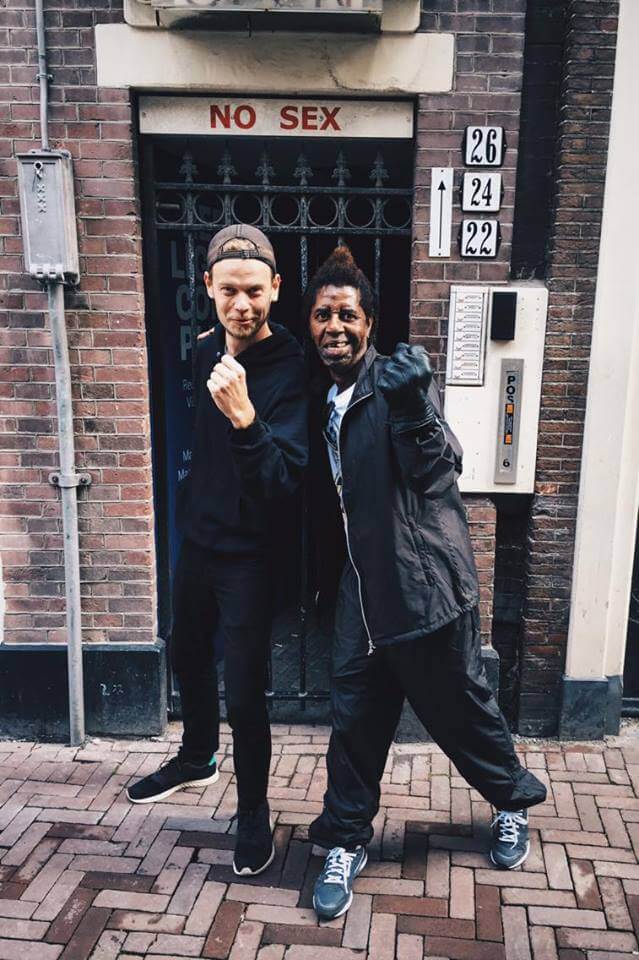 When Ivar Murd first encountered one of Neville Lawrence’s DIY music videos online, the Estonian documentarian had trouble discerning whether he was watching reality or performance art. After all, Lawrence’s Superstar and Star routine could’ve just as easily come from the Cabaret Voltaire or even The Eric Andre Show. Either way, Murd said he was hooked.

“For years I’ve been wanting to take this guy on tour just based on his YouTube videos,” Murd, 25, said over a cup of coffee in Benson last month. “We kind of daydreamed about inviting him to Estonia for a few years, but Nebraska is so out-of-the-way that it was pie in the sky for a long time.”

Lawrence, 52, turned out to be the real deal. The Trinidad and Tobago native had been an irregular burst of eccentricity on Omaha’s public-access channel throughout the late ’90s and aughts before amassing tens of thousands of views on YouTube. It was there, underneath the uncomfortable drollery of one of Superstar’s homespun space costumes, that Murd saw flashes of brilliance and sadness in the artist’s lo-fi blend of Afro-Caribbean R&B and dance music. Lawrence was like Omaha’s very own Daniel Johnston and Murd felt compelled to take him on the road.

“It’s like he’s discovering house music by himself,” he said of Lawrence’s unconventional songwriting instincts. “Everything’s four beats, it’s all repetition, but then in the four hit, there’s a three-hit tambourine that sounds like Iggy Pop or something.”

Lawrence and Murd are currently wrapping up Superstar and Star’s first European tour, or first tour of any kind for that matter, which included dates in the Netherlands, Finland, Estonia and Sweden. His Amsterdam stop comprised an in-store appearance at Rush Hour Records, which represents a host of underground music celebrities; an interview at Red Light Radio, which broadcasts from an old prostitution window in the city’s notorious Red Light District; and a recording session with the mysterious DJ Im Sorry, who made a special tape for Superstar to sell on his journey.

Though it was in Estonia where Superstar had his Beatles-arrive-in-America moment. The small Baltic country is home to Lawrence’s label representation, Porridge Bullet, which procured airplay for him leading up to his shows in Tallinn and Tartu. Siim Nestor, a Porridge Bullet spokesperson, wrote in an email that it was the legendary, London-born DJ Rhythm Doctor who originally discovered Superstar’s tracks for the label. Nestor, too, became hooked.

“[It was] his uniqueness, his sensitivity, his melodies and rhythms,” he wrote of Lawrence’s appeal. “And, of course, that he truly seems to be from another wonderful planet.”

Superstar’s European exploits will eventually be featured in a documentary directed by Murd, who has become Lawrence’s de facto manager throughout the process. The director said he originally got into filmmaking through skateboarding.

“I wasn’t a good skateboarder,” he said, “so I was the one who held the camera.”

As the stepson of an Estonian diplomat, Murd spent much of his childhood abroad and was “raised American” in private schools. He studied film at Fairleigh Dickinson University in New Jersey before working in advertising in New York City.

Murd said he’s still haunted by his hometown of Kohtla-Järve, which he describes as the Detroit of Estonia. The city of roughly 36,000 people had twice that in population at the tail end of the Cold War and was where Soviets mined the plutonium for their first atomic bombs. Murd is in the process of releasing a feature-length documentary on the city called Tuhamäed, or Ash Mountains.

“The reason I went back is because my mother passed away, so I had to take care of all that,” he said. “It was three years of hardcore soul searching.”

After the heaviness of Ash Mountains, Murd’s Superstar and Star documentary was supposed to be a “light, little thing” between projects, he said. That was, until Lawrence handed Murd a pile of court documents and asked him to find his daughter. That’s when things started to get weird.

“It was going to be a tour movie, and then, well, that happened,” he said. “But that’s good — it’ll make for a much, much stronger story.”