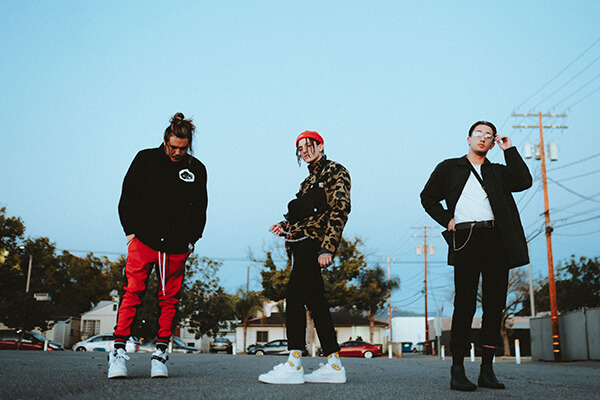 One Direction. The Wanted. Justin Bieber. These artists sound nothing like Chase Atlantic, the dark, druggy three-piece from Cairns, Australia. Initially, though, these were the artists that lead singer Mitchel Cave and guitarist Christian Anthony bonded over.

The pair were part of a boy band called What About Tonight that auditioned on Season 4 of the Australian version of “The X Factor.” After getting eliminated in week two of the competition, they teamed with Mitchel’s brother Clinton and started developing a new sound. After catching the ear of Joel and Benji Madden of Good Charlotte with their initial pair of EPs, the band began traveling to Los Angeles to work and record.

“When we moved to America, we started broadening the music we were listening to and started listening to artists like The Weeknd and Travis Scott,” says Anthony. “We fell in love with the drum and bass sounds they were using and infused that with our already evolving sound.”

Beyond those mainstream hip hop and R&B touchstones, the group has noted David Bowie and Prince as major influences on its sophomore album, PHASES.

“Genres are slowly fading away; people make music they like, and people are more inclined to listen to new music despite what their usual taste in music may be,” he tells me. “It’s a beautiful way to listen to music and have no prejudice based on genres.”

They even throw in a little classical as well. “Clinton was a classically trained saxophone player and Mitchel was in a choir,” says Anthony. All of it makes for an intoxicating mix that sounds dangerous, lovelorn, and yet surprisingly heartfelt.

“STUCKINMYBRAIN” handles something that all the members are familiar with. “It’s our ode to our personal struggle with mental health, and how we dealt with our internal battles with drugs and alcohol,” he says. “We always try to be as raw and honest with our music as we can be.”

For him, the best part is “just being on stage with your best mates doing what you love every night, and people being a part of that and singing along.”