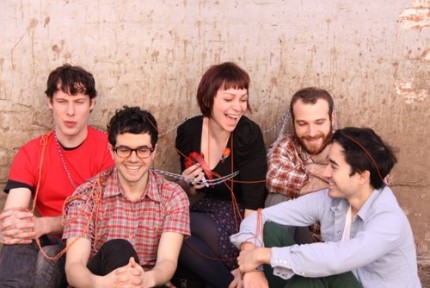 The version of Cymbals Eat Guitars that created the band’s breakthrough 2009 debut album Why There Are Mountains has long since evolved.

Originally the project of singer/guitarist Joe D’Agostino and drummer Matthew Miller, the first line-up was cobbled together via Craigslist want ads.

Eventually, the three members that originally joined Miller and D’Agostino left the band and keyboardist Brian Hamilton and bassist Matthew Whipple became part of the band.

“There was sort of a gradual transition into the line-up as it is now,” Whipple says.

In fact, Whipple says he and Hamilton ended up joining the band in the same way, after friends recommended they audition for the band.

“It’s something we both decided to do on a whim,” Whipple says.

Whipple joined the band in October 2009, about six months after Hamilton joined. About a month after joining the band, Whipple and the band headed to Europe for a tour.

Prior to joining the band, Whipple had only played one show outside of the New York area with a band he was in previously. That lone gig, at 2009’s South By Southwest Festival, was only a few months before Whipple ended up in Cymbals Eat Guitars.

“We drove straight through the night to play the show,” Whipple recalls.

Once he was in Cymbals Eat Guitars, Whipple quickly logged plenty of tour experience. After about a year, the band finally wrapped up touring and then set about working together on their second album, Lenses Alien.

The band spent about four months working on songs for the album, while camped out in the basement of Whipple’s parents in Morristown, N.J., a suburb about an hour north of New York City.

“It was a pretty ideal situation in terms of not having any distractions,” Whipple says.

The band took over the basement, around the same time the rest of the house was being renovated. The band would start rehearsing in the morning, while Whipple’s parents were at work.

Whipple says he tried to minimize his parents’ awareness that there was a loud rock band working on a record in the basement.

While they were working, producer John Agnello dropping in periodically to help the band with arrangements and give the band advice.

The band had plans to work with Agnello even before they signed a deal to release a new album on their current label home, Barsuk Records.

The band was eager to work with Agnello, who has worked with Dinosaur Jr., mixed the Breeders’ lone hit “Cannonball” and produced albums by the Hold Steady.

“John has a pretty intense discography when it comes to indie rock,” Whipple says.  “And now he’s our good friend.”

While D’Agostino still is the band’s lyrics and melodies, there was a definite sense of the record being the product of the entire band.

Whipple says on some level, it felt like they were making their first record ever.

“It was technically it was the first record the four of us had made together,” he says.

The year-plus of touring with the current four-person line-up helped build a sound, one that the band tried to tap into once they were making the record. While D’Agostino still provides the general structure of songs, the band has stretches out the format more and more.

“It’s definitely a lot more free form than it used to be,” Whipple says.

Whipple says just how well the live sound converged with the recorded sound on Lenses Alien once the band started touring behind the new album.

“It was both a conscious decision and a natural thing to happen,” he says.

Once the band actually got into the studio, it was very quick process. The band tracked for 10 days and then mixed the songs in an additional five days at Head Gear Recording studio in Williamsburg area of Brooklyn.

Whipple says the band just tried to make a record that pleased them, while exemplifying the apparent growth the band had undergone in the previous year.

“We definitely wanted to strip down a lot of the extra instrumentation that was on the first record,” Whipple says.