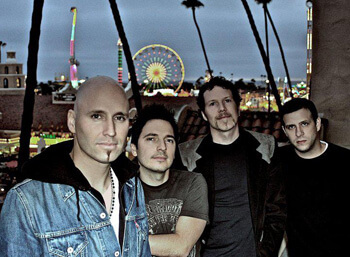 Sometimes, you just need to shake things up and keep it fresh and interesting. Variety is the spice of life, right?

Matt Scannell, lead singer, guitarist and songwriter for Vertical Horizon, subscribes to that philosphy in regard to the iconic pop-rock act’s latest studio album, Echoes From The Underground.

Since their big breakout with 1999’s “Everything You Want,” Vertical Horizon have been sailing along the top of the pop charts, continuously churning out radio hits and touring nonstop. Even when Scannell is away from his alma mater band, his fingerprints can still be found across the music landscape. Penning such songs as “Wish You Were Here” for the band Hey Monday — whose lead singer was the winner of season 3 of “The Voice” — and collaborating with Gramy-award-winning songwriter/producer Richard Marx. The duo co-wrote Marx’s 2012 AC hit “When You Loved Me.”

Perhaps it’s these new endeavors that have inspired Scannell to broaden the sound of Vertical Horizon or, as he puts it, “I have bigger ears now.”

While shopping at a Whole Foods in Utah (where Vertical Horizon was performing on the “Under the Sun” tour with Sugar Ray, Smash Mouth and other popular ’90s+ bands), Scannell spent sometime with me on the phone describing his inspirations for songwriting, how his writing process has evolved and what to expect on the band’s soon-to-be-released album Echoes from the Underground:

Who were some of your favorite songwriters in your early years and who’s lyrics do you enjoy the most today?

Scannell: (When I was younger) Peter Gabriel was my No. 1. I also loved Rush. But, as far as songwriters go, Peter Gabriel is pretty tough to beat. (For more contemporary songwriters) I really like Muse a lot. I love Radiohead. I love Elbow, they’re one of my absolute favorite bands.

A lot of your song themes seem to center around topics of love and heartbreak. Are these topics that you have a lot of experience with?

Scannell: Yeah, unfortunately that’s something that just comes with life (laughing). It’s important to me to write about what I know. One of the situations we all find ourselves in is the ups and downs of love. The inspirations for songs can come from just about anything. Back in the day, I would have to be living those experiences in order to write about them. I sort of sabotaged a lot of good relationships along the way to remain inspired to write. It’s a really a sad way to live your life but, I eventually learned how to tap into those things that inspire me but, not necessarily have to be living with them.

How do you feel Vertical Horizon’s sound has changed since you first began?

Scannell: With this new album, I feel we embraced different styles of music that we wouldn’t have felt comfortable embracing in the past. Things like, electronica and more dance oriented music. That would have been off the list before. But now, anything is fair game. I listen to more varied sources for inspiration. As a result, this record, stylistically, is our most varied record compared to anything we’ve ever done before. That’s a very satisfying thing to be able to say. I find it very important to try to push to be inspired and take and chance. It’s very easy to be complacent as a musician.

Is this different direction in sound a conscious decision on your end?

Scannell: It was definitely a conscious decision. We’ve done our thing one way, why not try to do it slightly different? It’s very off the cuff and spur of the moment. It’s chasing inspiration almost like a circle or a wave and letting it take us where it wanted to go. In the studio, I wouldn’t do a whole lot of chance taking but, this record really gravitated towards that. It was really rewarding to develop.

What subject matter do you touch on in the new album?

Scannell: In many ways, it’s the tried and true source of material which is personal experience. The life I’ve lived, the relationships I have, fears I have and the questions that I have. I view songwriting as a form of therapy. I tend to process emotions and feelings through song. It also comes from pictures that I’ve seen along the way. There’s a song called “Constellation” that’s based off of a snapshot in my mind of a family that I saw as I was riding down the road one day. It was a man and woman setup in their lawn chairs in their front yard with their kids sitting down watching the cars go by. I thought to myself, ‘What does this guy think? Does he want to be in one of those cars going somewhere or does she (the wife) wish for something else? What’s their story?’ So I tried to write their story. I don’t tend to write stories like that very often. But, every once in a while it comes to me.

You can see Vertical Horizon at the Under the Sun concert at The Stir, 1 Harrah’s Blvd, Council Bluffs, Iowa 51501, this Friday with Sugar Ray, Smash Mouth, Gin Blossoms and Fastball. Their new single “Broken Over You” off of their new record Echoes From The Underground is available for download at VerticalHorizon.com.