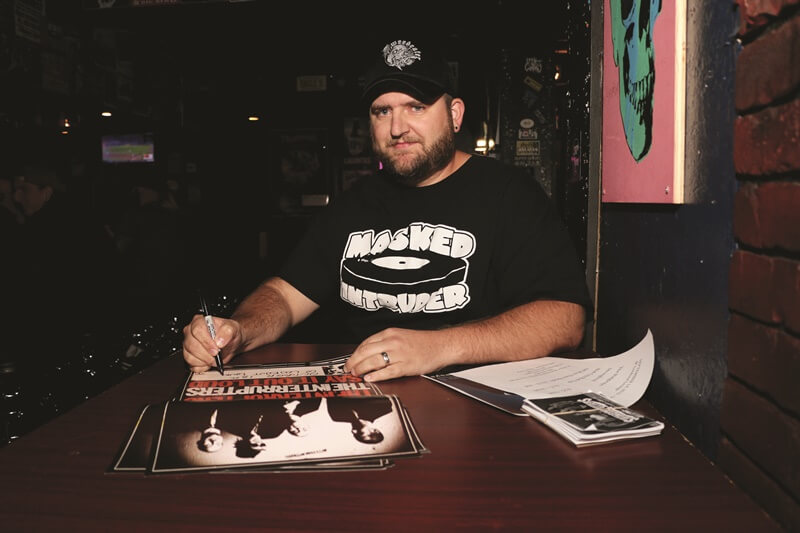 It was backstage at the Slowdown during the first annual Stoned Meadow of Doom Fest where I first noticed it in his eyes. The founder of Black Heart Booking, who had a hand in promoting the festival, was gearing up to field my question against a muffled backdrop of dark, sludgy riffs, but I already had his answer. It was those eyes: Lucas Wright loves what he does.

“This, right here, is like the fruits of the labor tonight,” Wright, 35, said while pointing toward the wall where the loud droning must’ve been blistering on the other side. “But what you don’t see happening during shows is the months of emails, contract negotiations, printing up of flyers and marketing. All of that stuff is necessary to make something like this happen.”

For the past eight years, Wright’s one-man, DIY production company has been known for bringing punk, hardcore, metal, psychedelic, stoner and indie rock shows to the metro area. Black Heart Booking has also lined up underground hip-hop acts and an occasional stand-up comedian, including Doug Benson. It’s all a hobby if you ask Wright — a hobby that has made Omaha a destination for obscure tours that once upon a time skipped over Nebraska altogether.

“A lot of the bands I book are of a certain niche, a certain genre that some of the other places aren’t doing,” he said. “If I wanted to go see these bands at some of these shows, I’d have to drive to Kansas City or Minneapolis.”

Wright, a North Platte native with 20 years of concert promotion experience, is a veteran when it comes to booking local, regional and national touring acts. The promoter said he started booking his first bands while still in high school.

“I was in an Alkaline Trio cover band at one time and realized, wisely, I believe, that my talents lie off stage behind the scenes,” he said.

After graduating, Wright said he snagged a job at the Ranch Bowl — a popular Omaha concert venue that closed in 2005 — and began forming relationships with local and touring bands. It was something that would pay off a year or so later when he transferred from UNO to the University of Nebraska at Kearney.

In Kearney, Wright said he instantly saw a need to liven things up in what seemed to be a barren wasteland for original, live music. So he did what every other bored college student in town didn’t think to do: He started a production company.

“Through some people I had met from North Platte, who had either moved to Omaha or Lincoln, or bands I met while working at the Ranch Bowl, I started booking shows in Kearney,” he said. “That’s kind of when Black Heart really started.”

Wright eventually brought his then thriving company to Omaha in 2008. But after he arrived, the promoter soon discovered he’d have to start over in his new home and build his reputation from the bottom up.

“When I first got to town, bigger venues were like, ‘Who are you?’” he said. “So I had to start doing shows at underground bars and venues like the 49er and Barley Street Tavern.”

The promoter’s hard work paid off, as places like Slowdown and The Waiting Room Lounge started to notice the bands he was booking.

“Larger venues were like, ‘This guy knows what he’s doing, he’s bringing in some pretty talented bands,’” he said.

Although Wright admits he’s tried to quit booking shows for periods of time since then, he said he’s since realized that Black Heart Booking has become too ingrained in his identity to stop. Besides, he still hasn’t lost the glow in his eyes, the love for what he does. You can see it when he’s catching up with bands he’s booked in the past or listening to local music. When I was finally able to ask Wright what his favorite part of his hobby was, he was quick to answer:

“The relationships you make with people,” he said. “It’s really about the people that you know.”