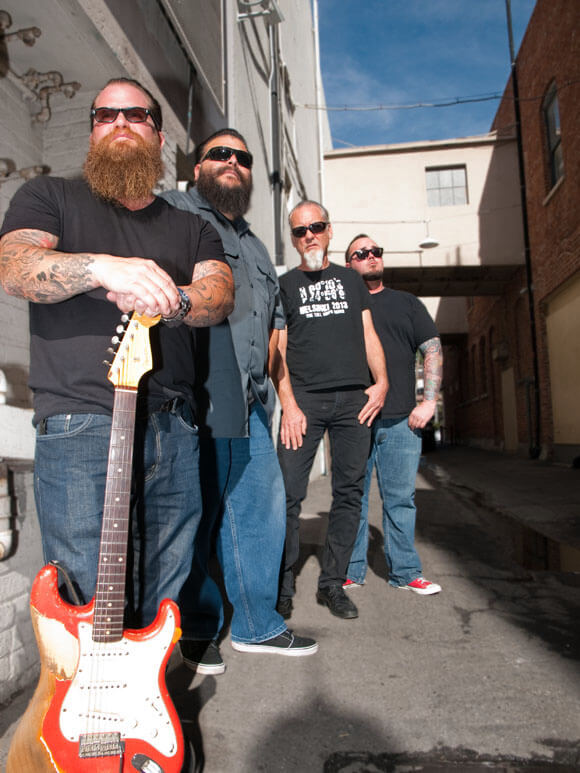 The blues is back at The 21st Saloon after a hiatus to allow for fans to attend Thursday Playing With Fire shows. The 21s’s blues shows are Thursdays unless otherwise indicated. Nashville-based Stacy Mitchhart has been seen here previously at The 21st Saloon and on the Playing With Fire stage. He and his band are back on Aug. 6. Mitchhart is an accomplished guitarist and entertainer whose latest CD mixes down-home blues with his soul-inflected sounds. He and his band tour extensively and also hold down a residency at Nashville’s Bourbon Street Blues and Boogie Bar. See stacymitchhart.com.

Tuesday, August 11, Southern California’s hard-driving band The 44’s is back. They combine great guitar with soulful harmonica work and a walloping rhythm section. Blues Blast Magazine calls them “one of the most potent blues bands in Southern California…they have a post-war Chicago sound, and they definitely exude a rough and raw old-school rock and blues vibe.” See the44sbluesband.com.

Award-winner Johnny Rawls is up August 13. Born and raised in Mississippi, Rawls worked with soul-blues greats like Joe Tex, Little Johnny Taylor and O.V. Wright before starting his own band in the mid-1980s. Rawls real-deal soul-blues is regularly recognized in the Blues Music Award nominations. See johnnyrawlsblues.com.

Rounding out the schedule in coming weeks are guitarist James Armstrong August 20 and Oregon’s Polly O’Keary & The Rhythm Method Sept. 3. There’s a special show Sunday, August 27, with the high-octane rockabilly of Ross Kleiner & The Thrill, an excellent band from Minneapolis. Opening is Omaha’s own Lash LaRue & The Hired Guns. All shows are 6-9 p.m. unless otherwise noted. Keep an eye on The 21st Saloon on Facebook for schedule updates.

Lincoln’s Zoo Bar has some great shows in August including former Trampled Under Foot vocalist Danielle Nicole and her new band Friday, Aug. 7, 9 p.m. SoCal’s The 44’s are up Wednesday, Aug. 12, 6-9 p.m. Nashville bluesman R.B. Stone follows at 9 p.m. The Bel Airs are back Friday, Aug. 14, 9 p.m. Tony Meza of the Tijuana Gigolos celebrates his birthday with a party-show Saturday, Aug. 22, 6-9 p.m. Watch for the rest of the Wednesday blues matinee announcements at zoobar.com.

Josh Hoyer & The Shadowboxers are hitting the road hard, taking their soul sound from K.C. through Montana, Idaho and British Columbia to the Pacific Northwest and the West Coast from late July through most of August. Catch them locally at The Zoo Bar Friday, Aug. 28, 9 p.m., plus Omaha’s Taste of the Old Market Saturday, Aug. 29, 7 p.m., and the Omaha’s Jewish Community Center’s concert series Sunday, Aug. 30, 7 p.m. Hear tracks from their last disc and see the latest news on this local band that is getting heard on the national scene at joshhoyerandtheshadowboxers.com.

The public nomination period for the Omaha Entertainment & Arts Awards ends Aug. 31, follow the “Vote Note” link at oea-awards.com. Public nominations decide the nominees in all categories, professionals in each arts area determine the OEA winners.

Benson First Friday is back Friday, August 28. Watch Facebook.com/BensonFirstFriday for the final schedule and map of art and music.

The Harney Street Tavern in the Old Market has been booking some great local and regional blues and jazz shows throughout the week. Check their schedule at harneystreettavern.com.

Watch the weekly digital-only column for lots of updates and new music announcements, including an expected upcoming concert date for Hoodoo favorite Johnny Boyd. The former Indigo Swing bandleader is putting the finishing touches on a new album and should be hitting the road in September. Via emails he says he is anxious to debut his new material for his Omaha fans. Follow his latest announcements at Facebook.com/JohnnyBoyd.