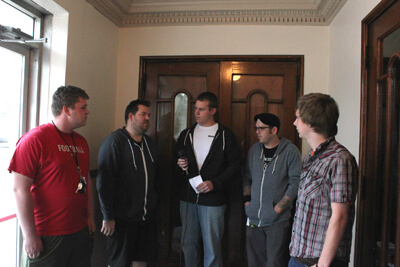 Bowling For Soup has been to Omaha many times before and every time are sure to put on a good show. This was the case yet again last Thursday night at the Sokol Underground venue. The show had four bands performing that night and all of them got the crowd going. We got a chance to do an interview with members from Freshman 15, Patent Pending, and Bowling For Soup before the show and they all gave us an insight of what we were about to see that night.

We talked to Gary and Erik with Bowling For Soup first and we talked about what the music industry has been like since their start in the mid ‘90s until now. Also they mentioned the hardships that they went through to get where they are today. We also did something special during the interview, and we brought two fans into it to ask their own questions. Matt and Alex got a chance to meet the guys and ask questions about what they did to stay on their feet in the industry and what bands they looked up to when deciding to go into music.

Next we talked with Anthony, Joe, and Rob from Patent Pending. To me, this really wasn’t an interview but a chance to see what the guys were like offstage and we just had fun. The guys told us about Rob’s finger accident the night before and how they got him through it. We did end up talking about the band a little and asked them what fans have been saying to them after they see the set. Also we had an interesting time when our mic went out for a little bit but the guys just kept going.

We then talked to Davey and Davey with Freshman 15. They were really excited to be on this tour and as we were doing the interview we sort of had to rush through it because they were performing 15 minutes later. The guys still had fun with it and because of the rush, it turned out really funny. They did manage to talk about their latest album, “Here’s to Feeling Good” along with some songs they would want new fans to listen to first.

The show turned out to be much like all of our interviews, just a fun hang out session with the bands. All of the bands stopped in-between songs to talk to the crowd. At one point, Joe, the lead singer of Patent Pending, had to stop in the middle of a song as he threw a shake weight to someone in the crowd but they missed and it hit a girl in the head! Bowling For Soup was great with fan interactions. They would hear a song name come from the crowd and play it, like taking requests. I almost totally forgot about their song (Ready Or Not) Omaha Nebraska until they opened the show with that song to really get the crowd going. All in all it was a great night with interviews and an awesome show!

Make sure to check out the interviews from the night:

Interview with Bowling For Soup: http://www.youtube.com/watch?v=WAua_MZyJyw