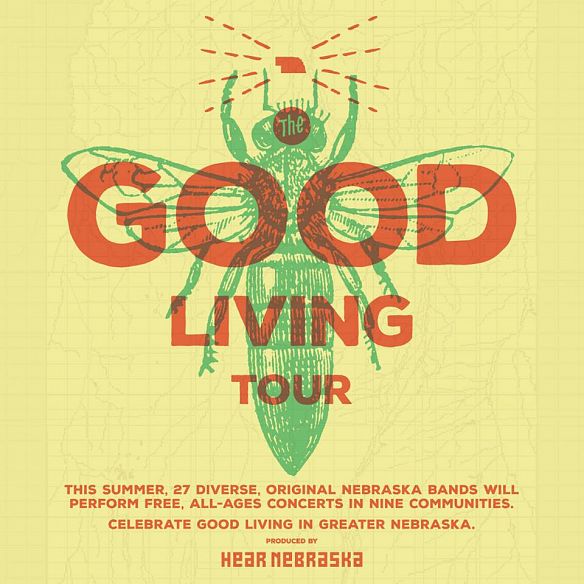 Most music fans at some time in their lives have traveled a few hundred miles to see a favorite band perform. But imagine having to travel three hours every time you wanted to simply see a rock show.

That’s what Ryan Murphy does. The 29-year-old drove from his home in Scottsbluff, Nebraska, to Boulder, Colorado, a couple weeks ago to see journeyman rocker Butch Walker. Making  pilgrimages to larger cities to see original music performed is just part of living in rural, outstate Nebraska.

“The opportunities are few and far between here to see a true rock show,” Murphy said.

But this month, the rock show is coming to Murphy and to other culturally landlocked music lovers who call Western Nebraska home.

It’s called The Good Living Tour. Produced by cultural non-profit organization Hear Nebraska, the first-of-its-kind project packs up bands from the Omaha and Lincoln areas and transports them to rural western communities, many of which have never seen a rock show performed in their towns except by insipid cover bands.

A total of 27 Nebraska bands are involved in the nine-day tour that starts July 17 in Imperial and ends eight towns later in Grand Island. For Hear Nebraska Executive Director Andrew Norman, the Good Living Tour is a dream come true.

“I grew up in Imperial and I never saw anything like we’re bringing to these towns,” Norman said. “We had a county fair that brought in C-level national country bands, but nothing interesting. When I discovered indie music and punk rock — bands that approached music in a different way — it blew my mind. I wish I could have seen (Omaha indie band) Cursive in the late ’90s when I was in high school, but I missed out.”

Norman said bringing local indie bands to the rest of the state has been an objective of Hear Nebraska since the organization formed five years ago. “Hear Nebraska purports to be a statewide organization that covers music news outside of Omaha and Lincoln, but it’s tough when your entire staff lives in those two cities.”

So as part of the The Good Living Tour, Hear Nebraska staffers traveled to tour-stop communities weeks before the first concert to write feature stories and produce videos that capture the essence of each location while explaining why young professionals have chosen to live in rural communities where modern culture can be a scarce commodity. The stories and videos appear on the organization’s website, hearnebraska.org.

Norman said towns were selected for tour stops after he presented the concept at a travel conference last October. “A number of representatives from some of the towns said they wanted to be part of it,” Norman said. Other towns, like Scottsbluff, were chosen because energetic organizations reached out. Murphy is the head of The Next Young Professionals, a group of 20- and 30-somethings “trying to buck the trend of people saying there’s nothing to do in this town. When the opportunity came up to get a Good Living tour stop in Scottsbluff, I chomped at the bit,” Murphy said.

Norman said group’s like Murphy’s helped finance the tour, along with grants from Humanities Nebraska, Nebraska Arts Council and the Nebraska Cultural Endowment. Corporate sponsors Pinnacle Bank and the Center for Rural Affairs also pitched in, along with media partner The Omaha World-Herald.

Tour expenses include paying for travel, lodging, sound, production and staging, and of course, paying the bands, which were selected based on a number of criteria.

“First, every band had to play original music,” Norman said.

Each tour stop will feature three acts. “One band will be a group that plays music anyone would be able to recognize and ‘get,’ and who are among the best in the state at what they do.” Examples include bluesman Josh Hoyer and the Shadowboxers, pop act Rock Paper Dynamite and rockabilly band The Bottle Tops.

“We also wanted a wildcard on each bill aimed at giving young people and kids something to expand their expectations, to say, ‘Holy shit, what is that? I want to hear more.'” Examples here include indie band See Through Dresses and hip-hop acts Both and M34N STR33T.

A third band was selected for each show with ties to the community where the tour stop is taking place. Member of the dream pop band blét are from Scottsbluff; singer/songwriter Dustin Prinz has roots in West Point, and a couple members of Simon Joyner and the Ghosts have called Grand Island home.

Norman said the biggest challenge to pulling off the tour is attracting an audience for bands few if any in these towns have heard of. “Can we get people to come?” Norman asked. “We are approaching marketing in as many directions as we can, but we don’t necessarily have resources in each of these towns and aren’t sure the best way to reach the audience.”

Their marketing strategy combines working with traditional media, canvasing social media and that good ol’ standby, distributing flyers. “Had I heard about something like this growing up in Imperial, I would have been there for sure,” Norman said.

The tour’s end goal is more than just spreading culture to the outer reaches of the state. Norman said he hopes the tour can create new opportunities for bands traveling from Omaha to Denver. “It would serve Omaha and Lincoln bands if they didn’t have to drive eight hours between gigs, and instead had a viable places to play along the way,” Norman said.

Places like Murphy’s Scottsbluff. “Living out here can feel like being in a different country,” he said. “We sometimes feel forgotten. So just being included in this tour has meant a lot to me and my friends.”

Here’s the line-up for The Good Living Tour. All shows are all-ages, free of charge and begin at 8 p.m.:

Bands: The Bottle Tops, See Through Dresses, The Talbott Brothers

Location: Downtown on ‘the bricks’

Bands: Mike Adams and Friends, The Seen, Josh Hoyer and the Shadowboxers

Bands: A Summer Better Than Yours, Kill County, The So-So Sailors

For more information, go to hearnebraska.org.

Editor’s note: The author is a member of the Hear Nebraska Board of Directors.