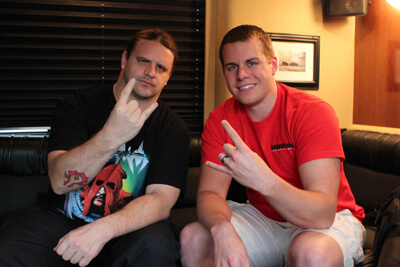 The Slowdown in downtown Omaha is known for bringing some great shows to the area. Last Tuesday night they didn’t disappoint by bringing one of the best death metal bands to town, Cannibal Corpse. The band started in 1988 and have been in the music scene ever since. They recently released their 12th studio album, Torture. With their album sales they are the top-selling death metal band of all time.

Backstage Entertainment got a chance to sit down in an interview with lead singer of Cannibal Corpse, George “Corpsegrinder” Fisher. George joined the band in late 1995 after replacing the original singer. In the interview, we asked him about the band, controversy, and concert memories.

With song titles like Make Them Suffer, Hammer Smashed Face, and Demented Aggression, we asked George where inspirations for songs come from. The main inspiration comes from horror movies and zombies. Then when we asked about the controversy about people talking about the band and his response to haters, he said that he tries not to let it bother him too much because if those people were to meet George he doesn’t think they would say anything to his face. Cannibal Corpse is out there doing what they love and they have a lot of people that like their music and that’s all that matters.

To see the half hour long interview with George, click the link below: