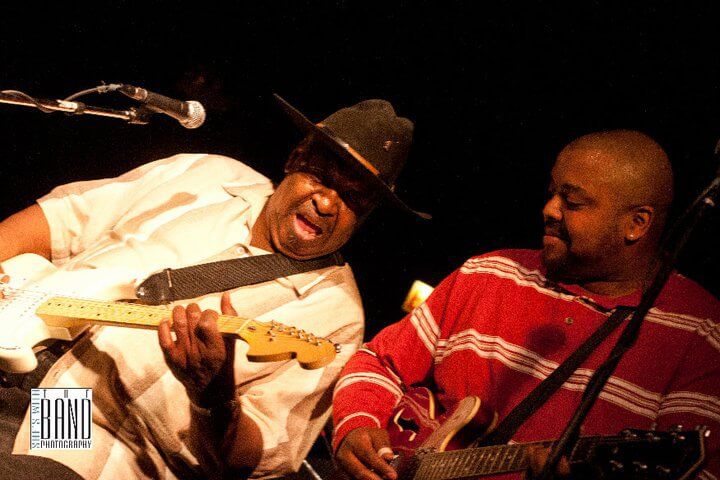 Magic’s son Shawn Holt is now fronting Slim’s legendary band The Teardrops. The younger Holt has brought another Lincoln musician, Levi William, on board with him as an official Teardrop. The new band’s first gig was heard live online from Rosa’s Lounge in Chicago Saturday, March 23.

Shawn Holt and The Teardrops will perform at the Chicago tribute to Magic Slim on March 28 at The Mayne Stage venue. “A Night for Magic” features artists from veteran Teardrops’ member John Primer to a host of Chicago greats like Otis Clay, Eddy Clearwater, Billy Branch, Lonnie Brooks, Eddie Shaw, Dave Specter, Nick Moss and others including Zac Harmon and Carl Weathersby.

On Sunday, March 31, Lincoln’s Zoo Bar hosts a celebration of life for Magic Slim beginning at 3 p.m.  Performers include Shawn Holt’s Lil’ Slim Blues Band, the Bel Airs, Tijuana Gigolos, The Zoo Bar House Band and more. Proceeds from both events will go to Ann Holt, Magic’s widow. Donations to assist Mrs. Holt can also be made at magicslimblues.com.

Austin’s Hayes Carll is featured on Sunday, March 31, at the Sunday Roadhouse at The Waiting Room at 5 p.m. Carll’s credits include appearing on “Austin City Limits.” Also on the bill is another acclaimed Austin act, Warren Hood & The Goods. See sundayroadhouse.com.

The finalist from the first round of the Nebraska Blues Challenge as selected by judges’ scores is Josh Hoyer & The Shadowboxers. The second round of the event takes place April 7 at a location to be announced due to Gator O’Malley’s closing.

Saturday, April 13, at the Rococo Theatre is a night of Chicago blues with Rockin’ Johnny and his Chicago Blues Revue plus The Honeyboy Turner Band.