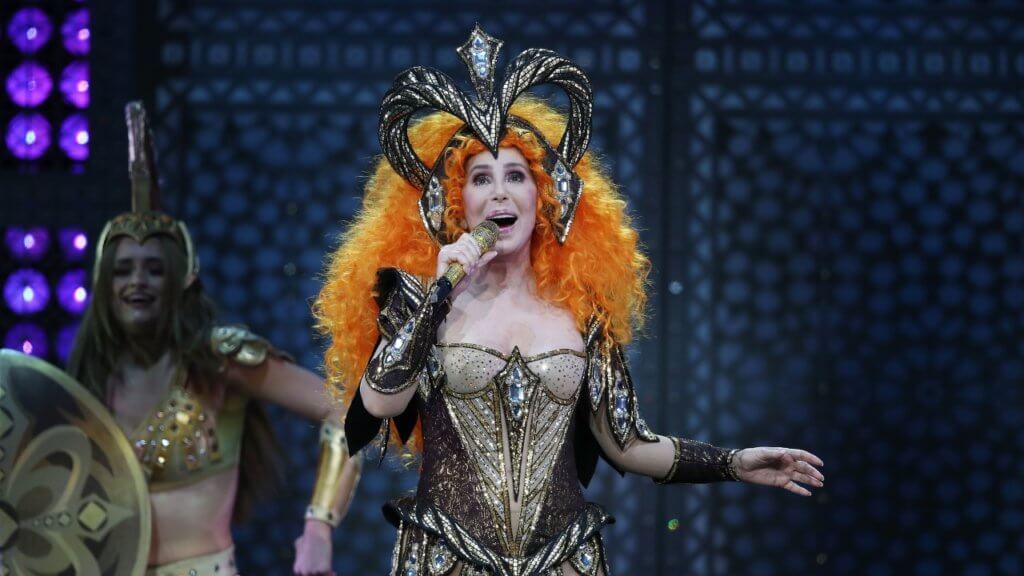 Cher’s career stretches back nearly 60 years and she touched on all of it and more when she brought the Here We Go Again tour to the CHI Health Center on Tuesday night. The 73-year-old icon played a lean 90-minute set that included hits, tributes to other artists, and more than a few montages.

Before the Goddess of Pop made her grand entrance, Chic featuring Nile Rodgers opened the show with a number of ebullient disco hits. After the trio of “Everybody Dance,” “Dance, Dance, Dance (Yowsah, Yowsah, Yowsah),” and “I Want Your Love,” Rogers performed a number of songs he helped to produce over the years. He played a particularly groovy cover of Daft Punk’s “Get Lucky” and a surprisingly spot-on version of “Let’s Dance” before ending with Chic’s Studio 54 kiss-off “Le Freak” and a mashup of “Good Times” and “Rapper’s Delight.”

After a short intermission, Cher made an entrance that only she could – by descending from the ceiling dressed as an orange-haired version of Cleopatra while singing her 2013 house hit “Woman’s World.”

She followed it up with “Strong Enough” before launching into a far-too-long monologue. For close to 15 minutes, she rambled on about a number of disparate life events. She talked about calling David Letterman an asshole, performing with Sonny to make enough money to repay the IRS, and the misogyny she faced throughout her time in Hollywood. It seemed sincere. It was also on a teleprompter in front of her which made it even more confusing as to why it was so incoherent.

Shortly afterward, a video montage dedicated to her late ex-husband Sonny Bono played before she returned in some psychedelic attire. For “I Got You Babe,” Cher was even able to perform alongside Sonny (well, sort of). She didn’t opt to go full Tupac-at-Coachella, but Sonny’s head appeared on the video screen alongside her as the pair sang their most enduring hit.

From there, the show pivoted towards her film career – starting with a performance of “Welcome to Burlesque,” from the 2010 film Burlesque in which she starred alongside Christina Aguilera. She even wore the exact same outfit she did in the film. Then came a trio of ABBA covers (she has a small roll in Mamma Mia! Here We Go Again) – “Waterloo,” “SOS,” and “Fernando” – before ending the middle portion of the show with her Oscar-nominated Peter Cetera duet “After All.”

In the final act, Cher paid homage to the musical influences she grew up with. There was a video tribute to Elvis followed up by a cover of Marc Cohn’s “Walking in Memphis” that featured a fake Memphis street complete with multiple billboards advertising “CHELVIS.”

Cher swung the clocks forward from the ’50s to the ’80s for her cover of Michael Bolton’s “I Found Someone” – in which she wore the same sheer bodysuit she did more than 30 years ago – and “If I Could Turn Back Time.” The was even a knock-off Van Halen guitar solo thrown in for good measure.

Anyone that wasn’t expecting “Believe” for the encore was kidding themselves. The singer’s signature song was everything that fans hoped for – fun, powerful, and an all-time great sing-along experience. In fact, Cher was having more fun lip-syncing to it than anyone.