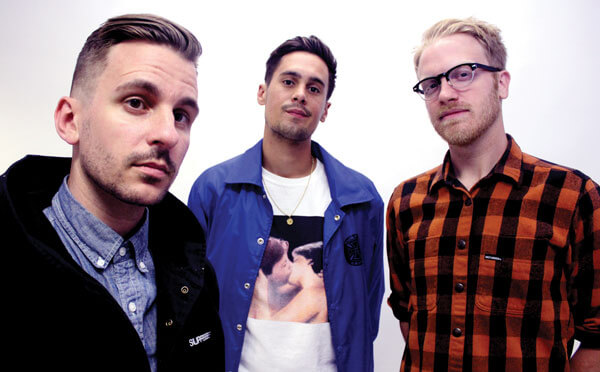 It all started in Midtown Omaha. Emcee Brent “Conchance” Gomez got some beats from Adam Robert Haug (AKA Haunted Gauntlet) and after recording a few songs together, the duo quickly realized they were on to something. After recruiting Brian “DJ Really Real” Crow, M34N STR33T was born and the trio got to work on its first album, Mutants of Omaha.

“It’s been a hustle while we try to break into local, national and international platforms independently,” Gomez explains. “After having made almost half a record, Adam started playing with names that would fit the group conceptually and aesthetically. He was playing with the word ‘mean’ and ‘the means’ because of its many definitions. The word is subjective and so is our art. We recorded the record in Adam’s house when he lived on 33rd street then when he lived on 34thSstreet. Those streets engulf much of what created our first record Mutants of Omaha. With a little help from Scorsese’s darts, we found the name that could mean or define it all.”

While M34N STR33T’s signature style of hip-hop has many vintage undertones, the trio manages to bring it to 2014 with solid production and Gomez’s modern lyrics. In their latest video, “Nite Owl,” references to Pabst Blue Ribbon and a shot of Brother’s Lounge reminds you it’s the 21st century. Gomez, however, doesn’t promote drug use and has a very unique take on the subject.

“I do state things I see and do also what I’ve seen and done,” he says. “Each song has its own demeanor. I sensor myself a lot when writing for self, but as I continue my walk through life with all its exploits, I can’t fail to mention them at times. I feel I have a responsibility to ethics and my arts integrity. My message is for the kids and humans. The older I get the difference between the way kids act and the way adults act is less apparent. That statement is from personal observation, witnessed by my eyeballs, documented by my pen and recorded by my voice.

“Whom want to speak on freedom and future/free food and pool for weed head loser/kid who comes home to abuse her/bo-bos in the sutra/Lexus with no gas/gassed up though a tooter.” That’s from the song “Scottie Pippen’s Right Knee,” he adds. “It ends with ‘read a book kid.’ This is a verse where drugs are not painted colorfully, but honestly. Love can be good and it can hurt, too, no?”

A live M34N STR33T show appears to have equal parts passion, emotion and energy. Although their career is just beginning, M34N STR33T is off to a healthy start. They are quickly gathering a large fan base and getting lots of positive feedback.

“I try to give the same emotion when playing as I did when I first wrote the words,” he says. “I enjoy seeing that in artists. It should never be forced. Playing should be personal, so I try to play it personal.”

He writes personally, too. He listens to a beat and if he feels it, a sentence normally comes to him. From that one line, he’s able to direct where the rest of the song will go. No topic is taboo.

“I like to write about everything,” he says. “I write about social, economical, mythical, magical, ethical, critical, and mathematical topics. I write about love, lust, losers, ladies, mothers, misery, madness, math, food, friends, and family.”  With influences ranging from Rakim and Ghostface Killah to Big Pun and Nas, his focus on the words is integral to the songs he writes. Although he’s seen success as a solo artist, he’s working hard on making M34N STR33T a household name while trying to maintain his solo presence.

“M34N STR33T is what’s on deck publicly,” he explains. “I am also focused on the new Conchance record I’m doing with Oscar Carrillo [SM Grims]. It’s easy to be able to work on both projects thanks to my brother Rick Carson of Make Believe Records and Studio. He helped us shape the Mutants of Omaha record to its pocket and now we are tracking and mixing the Conchance and SM Grims LP. I hope for the record to have a chance to be heard from a proper platform whether the platform is in a basement, state, national, or international.”

M34N ST33T was asked to play this year’s MAHA Music Festival and Gomez couldn’t be more excited for the opportunity.

“Being ask to play MAHA is an honor,” he says. “We are looking to be a good group for these kind of events. We put in work everyday for the sake of our art and it’s nice when you have people notice that.  This is a step for M34N STR33T and Conchance. Thanks to Aaron Shaddy for the invite and all the kind folks of MAHA. I really do appreciate it. See you Saturday.”