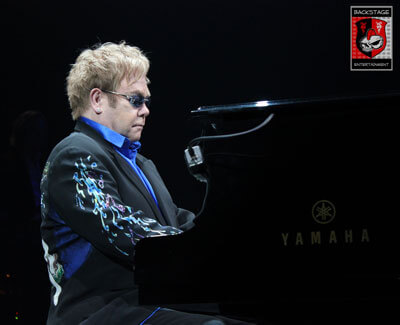 BY JEREMY LAFRENTZ Backstage Entertainment I wasn’t quite sure what to expect going to my first Elton John concert. I had grown up listening to his music, as my parents would often put in a greatest hits CD into the player. I did know this: Sir Elton just has the type of music everyone can love and sing along to. So as we made the trip up Tuesday night to the Tyson Events Center in Sioux City, Iowa, I was trying to imagine the type of crowd Elton would bring. Me being a guy in his mid-20s, I wondered if I would I be one of the youngest people at the show. As I got there and was escorted by security to take pictures with the photo pass I received, I took a look around at the packed arena and was surprised that I wasn’t one of the youngest ones — by far. I stood right next to the stage before the show and there in the front row were a handful of teenagers, including one who couldn’t have been older than 15. It just goes to show you that John has fans of all ages. Throughout his four-decade career he has produced many songs — again, most of which many people know and can sing along with. That’s exactly what happened when John played the hits like “Rocket Man,” “Bennie and the Jets” and “Crocodile Rock.” The concert was basically one massive sing along that included everyone in the arena. A little background on the concert: The announcement of John performing at the Tyson Events Center happened only two weeks before the show, but the venue has been trying to get him to perform for a while now. They even created a Facebook fanpage to get people to “Like” the page to get him to come. Their goal was to get 5,000 people to “Like” the page but only got less than half that number. Somehow they still worked their magic and got him to perform. When he first took the stage there was a huge roar that shook the place and that roar continued after each song. John even got off his seat, practically after every song he played, to liven up the crowd. After some of his songs he even walked across the entire stage to try and say his “Thank You’s” to everyone around the arena. Toward the final few songs, John motioned for the crowd in the front rows to get as close to the stage as they could and right before his encore, “Your Song,” played, he signed autographs for some of those people up front. Here’s a complete setlist from Tuesday night: Funeral For a Friend/Love Lies Bleeding Saturday Night’s Alright (For Fighting) Levon Madman Across the Water Tiny Dancer Philadelphia Freedom Goodbye Yellow Brick Road Daniel Rocket Man I Guess That’s Why They Call It the Blues Hey Ahab The Best Part of the Day Gone To Shiloh Monkey Suit When Love Is Dying Sad Songs (Say So Much) Take Me To The Pilot Sorry Seems to Be the Hardest Word Candle in the Wind Don’t Let the Sun Go Down on Me Burn Down the Mission Bennie and the Jets The Bitch Is Back Crocodile Rock Your Song Article courtesy of Jeremy Lafrentz of Backstage Entertainment. Check out their interviews, photos and contests to win autographed prizes by going to their Facebook page and clicking “Like” on the page: facebook.com/backstgentertainment.