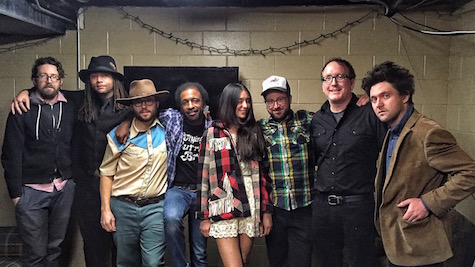 What do you do for fun when musically you can do anything you want? You put together a country cover band.

That’s what Conor Oberst did with his wife, Corina Figueroa, and their two roommates, Roger Lewis and Miwi La Lupa.

The project began last November strictly as a lark. Among the belongings La Lupa brought with him when he moved to Omaha from Brooklyn was a copy of Them Old Country Songs, a 1972 “various artists” classic that includes songs by the likes of Skeeter Davis, Connie Smith, Porter Wagoner and Dolly Parton.

“We love this record,” Oberst said last week over drinks at his Dundee bar, Pageturners Lounge, while fellow Standby Club member Dan McCarthy pounded out ragtime tunes on the bar’s upright piano. “I’ve not been a person to cover a lot of songs. It was nice to learn new ones. I’ve never played songs with this many key changes before.”

Oberst said Figueroa has a great voice and loves to sing, so it made sense to give the band a try. “She’s sang with me a few times before,” he said. “She was super excited at practice, but for that first show, she was extremely nervous. We all were.”

The rest of band is made up of people Oberst said are part of his extended household: Phil Schaffart, Oberst’s partner on the road and in running Pageturners; Mike Mogis and Ben Brodin, whose studio, ARC, is practically an extension of Oberst’s home, and Cursive’s Matt Maginn, who at one time also lived with Oberst.

“No one in the band is a country player in any way, shape or form,” Oberst said. “Even Mike (Mogis) doesn’t consider himself a country player. He doesn’t know all the Nashville things. The guy who’s most dialed in is Ben. He can play anything.”

The band’s first gig, at O’leaver’s Jan. 3 of this year, included covers of songs by the aforementioned country legends along with Charlie Pride, Sammi Smith, Bob Dylan and Randy Newman and more. The evening’s music was recorded and is online at liveatoleavers.com. Expect to hear a lot of those numbers when the band plays at The Waiting Room Saturday, May 21, along with a few new covers, possibly including “Honey Won’t You Open the Door” by Ricky Skaggs and “Good Girl Gone Bad” by Tammy Wynette.

Oberst said unlike playing in one of his other bands, this band has access to an unlimited musical catalog. “I never realized all the virtues of being in a cover band,” he said. “We’re never going to run out of good songs.”

It’s unlikely this band will ever enter a recording studio. “It sounds like a joke, but I feel like we’re a good band for parties and weddings and funerals and all that kind of stuff,” Oberst said. “It would seem weird to record covers, and I don’t know if we’d ever have originals, definitely not for this show.”

La Lupa, who sat next to Oberst during the interview, said the band may be “just for fun,” but that it takes the music seriously. “Someone wrote a review after our first show and said it sounds like we didn’t practice or something, and we were all kind of bummed,” La Lupa said. “We practice more for this band than any other band we play with. We’ll be practicing a lot over the next week.”

The band’s name, The Standby Club, grew out of a phrase used by a friend of Oberst’s who does film editing of live sporting events. “He always says ‘standby,’ and began using the phrase in everyday life,” Oberst said. “The Standby Club — I thought it would sound dope.”

As for Figueroa’s musical nom de plume, Oberst said she was afraid about going on stage. “I suggested putting on a persona, like a Superman cape,” he said. “Dolores Diaz is a Spanglish version of Doris Day and has an old Hollywood sound to it.”

“And it works out because the name ‘Dolores’ signifies heartbreak,” La Lupa said, adding that the name means “sorrow” in English, a fact that surprised Oberst, who quickly added, “We’re going to have some nice T-shirts made.”

Dolores Diaz & the Standby Club plays with Carl Miller & The Thrillers Saturday, May 21, at The Waiting Room, 6212 Maple St. Tickets are $10; showtime is 9 p.m. For more information, go to onepercentproductions.com.