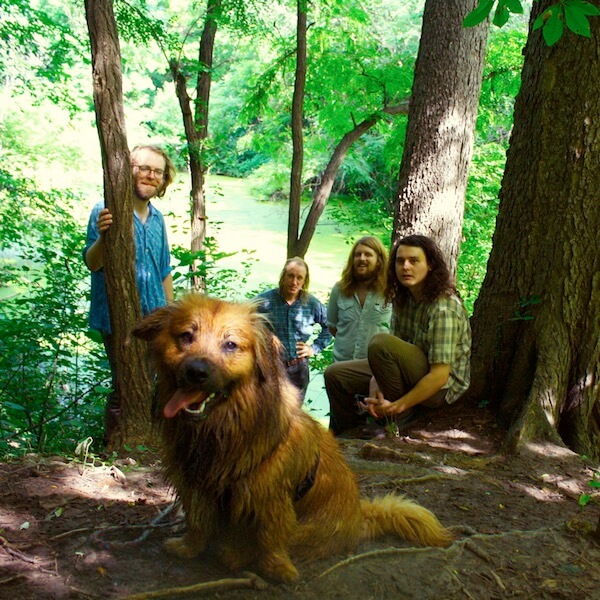 Last weekend I got a chance to interview David Nance at his Dundee home while rain poured down around us. I sat on the porch swing with my lap-top while Dave walked around with his huge, shaggy head of hair, in a worn-out illegible band T-shirt and flannels and answered my meandering questions for a half-hour before it got too cold. We finished up in his living room with his dog, Wild Man, staring me down and occasionally barking.

Last week Chicago label Trouble in Mind Records released his latest album Peaced and Slightly Pulverized under the name David Nance Group (don’t go looking for it in Spotify under “David Nance” because you won’t find it; better yet, just go to a record store and buy a copy or pick it up at the show). Joining Nance on the record are drummer Kevin Donahue, bassist Tom May and guitarist Jim Schroeder performing a collection of psych-rock anthems — huge, droning monoliths grounded in Nance’s grinding guitar and echoing vocals.

AllMusic critic Mark Deming called the record “a raw and raucous exercise in no-frills hard rock” adding that his guitar work is “a style that splits the difference between Neil Young’s primativist noise and Keith Richards’ fractured blues, with a bit more slop than either but a similar passion for volume and blissful crunch.” I guess that’s a compliment — Deming gave the record 3-1/2 stars.

Peaced isn’t so much a natural progression from Nance’s earlier records — last year’s break-through album Negative Boogie and 2016’s More Than Enough (both released on Ba Da Bing!) — as much as a slight turn toward more structured rock songs that evolve into amazing guitar jams — satisfying and easy to get lost inside.

Nance said the album was recorded in Jim Schroeder’s basement. “Jim has a nice tape machine set-up,” Nance said. “He’s a little more focused than me when it comes to fidelity. He’ll dial it in a little more; he cares about tape hiss.

“Out of the gate it’s the record that sounds most like a live band,” he added. “The last one we recorded in a day and then threw stuff on it. This one was recorded in a room with maybe a vocal overdub. It’s 90 percent live and that was the intent.”

Regardless of the live nature of the recording, Nance said the band likely will only play four songs off the record when on stage. “We’re also doing covers and old ones,” he said.

Those live shows used to be a mixed bag. I remember seeing Nance play a few years ago, possibly at Reverb or O’Leaver’s, where the set consisted of a half-hour of drone and feedback with a slight pause in the middle. On the other hand, recent shows, including at this year’s Maha Music Festival, have been relatively straight-forward, focused on selections from his latest albums but always climaxing with him and Schroeder trying to kill each other with feedback.

“I love the way it sounds when we’ve played recently” Nance said. “It’s been really present and in the moment – lots of uncalculated things happened. It’s been deep; I get a deep feeling coming away from it.”

One recent notable gig was opening for Jack White at ONEOK Field in Tulsa (Home of the Drillers) Sept. 17. “I never thought something like that would happen,” Nance said. “Someone from Jack’s team called and asked if we could play Shreveport and Tulsa. I said we already had a gig for the first night but would love to do the Tulsa show. We didn’t hear anything back. I wrote him three days before the show to see if it was still happening and they said ‘sure.'”

Nance said they got the gig thanks to someone who works at White’s Third Man Records who’s a fan of his band. “This guy emailed and we talked back and forth about records we like,” Nance said. “I found out later that he’s the guy running the show with Jack.”

Nance said he only spent a few moments with White in Tulsa. “We were all back stage and they just showed up in a van, got out and 20 seconds later were playing on stage,” Nance said. “As they were leaving the stage, Jack said thanks for playing and apologized for forgetting to say our band’s name from stage. It was insane.”

Old connections also helped land a new label. It was Nance’s history playing with Brimstone Howl that got him in front of Trouble in Mind Records. “I met Bill and Lisa (Roe, the label’s proprietors) through Brimstone,” he said. “When we went through Chicago we stayed with them. I love their label, they put out my favorite current stuff. Years ago they said if you ever want to do a record, we’d be more than happy to release it.”

Connections over the years also helped Nance book his upcoming tour on his own. Nance and his band (Schroeder, Donahue and Sarah Bohling of Thick Paint on bass) start out in St. Louis Oct. 24 for a 22-date tour that takes them south and east, back through The Waiting Room Nov. 13 before ending Nov. 16 in Chicago. Next March they’re headed back to Europe, followed by shows in Australia with indie-punk act Thigh Master.

“I worked at Coachella cooking pad thai and that funded my first tour,” Nance said. “I’ve been booking things myself for awhile. It works out pretty well. I’ve been connected through the underground to a lot of great people doing great stuff.”

Nance said he looks at music as “another part-time job. I would love to do it full-time, but I don’t know if that’s possible. I’m lucky to have the ability to do what I do, book shit myself and come home with enough money for rent. I’ve had opportunities to meet people and see great bands.

“I just want to keep doing it. It feeds my soul. I feel whole doing it. I always go in assuming no one’s going to like anything and nothing’s going to happen, so I’m pleasantly surprised.”