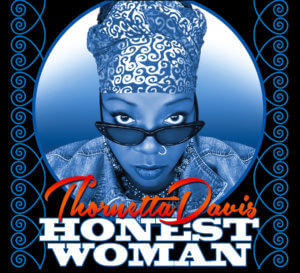 Although Thornetta Davis may be a new name for some Omahans, Michiganders in general and Detroit residents in particular are well acquainted with the ferociously talented signer. Crowned Detroit’s “Queen of the Blues” in 2015, Davis is certainly worthy of the title. She and her band will be here Friday, May 10, performing at the 1200 Club inside the Holland Center.

Davis has been performing since the mid-’80s, but it wasn’t until she joined the Chisel Brothers, one of Detroit’s most popular blues/soul acts, that she had an opportunity to stand out. “I had been performing primarily pop songs until then,” she said from her home in Detroit. “So I had to really dig into my mama’s record collection to reacquaint myself with a lot of those songs I’d be performing with [The Chisel Brothers].”

That exposure led to all sorts of other opportunities and awards for her vocal work, including singing backup for other Michigan natives such as Bob Seger and Kid Rock, but it was Ann Arbor’s Big Chief who helped Davis get a real leg up. Davis had been singing backup for a number of alternative bands in the ’90s when it was in vogue to have a black backup singer. Big Chief, a band with roots in hardcore punk, “wasn’t so much grunge as they were high-energy enthusiasts,” according to the All Music Guide. Davis had sung backup on some of the band’s earlier releases but took a larger supporting role on 1993’s Mack Avenue Skullgame, an homage to blaxploitation soundtracks, in which she played the role of Sonica.

Sub Pop, the label that released the album, was so impressed with Davis’ chops that it quickly signed her to her own deal. With Big Chief as her backing band, she set to work on what would become 1996’s Sunday Morning Music, a glorious showcase for her rich, soulful vocals.

But it didn’t come easy. Davis was used to singing songs others had written. She’d never written lyrics before. The band had already created a few pieces for her solo album, but it was up to Davis to contribute the lyrics and melodies. “The label called me up and said, ‘You need to start writing some songs or you’ll lose this deal.’” A friend asked her what she was going through at the moment, suggesting that it might inspire her lyrically. “I was in a bad relationship and I started writing about what I was dealing with,” she said. That’s where “Cry,” the album’s stunning opener, and others came from.

While the album received plenty of critical acclaim, it didn’t sell well. She did have an opportunity to record a follow-up, but again didn’t have songs ready to go, so the offer expired. She took some time to raise her daughter and dial back her career, playing the occasional local show and writing songs.

She came back with a vengeance, winning several local and national blues awards and was crowned Detroit’s reigning Queen of the Blues. She justified that title with her 2016 album Honest Woman, a solid collection of bluesy Detroit soul with a handful of guest appearances, including Kim Wilson of the Fabulous Thunderbirds.

“I like all types of music,” she said, “but the blues really opened doors for me [as a performer]. When I was singing pop songs, I wasn’t really exposed to the rock side of my Detroit heritage. Or even the gospel aspect. I didn’t grow up singing in church. So when I started singing the blues, it all came together: gospel, soul, rock.”

That’s what fans will get. When asked what fans can expect at her show, she said, “I tell folks they can expect some funky rock and blues.”