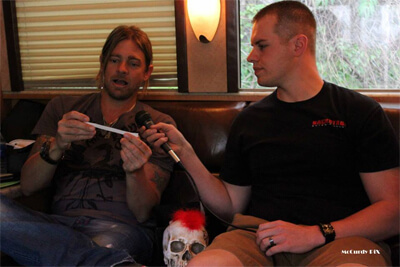 On May 28th, Sokol Underground hosted Device, Gemini Syndrome, and Beware of Darkness. Many were in anticipation of the event since Device is fronted by David Draiman, lead singer of Disturbed. David has played in big arenas throughout his career with Disturbed and for him to be playing at the Sokol Underground in a more intimate setting, fans really got to be up close with him. Before the show Backstage Entertainment got to interview Will Hunt from Device and Aaron Nordstrom from Gemini Syndrome.

In the interview with Will from Device, he talked about other bands he’s played in leading up to be part of Device. Also he talks about who he could hang out with for a day and what nights he would love to play over if he could go back to a show and replay that night. Talking about Device’s debut album, he loved the way it turned out and how well the first single, “Vilify,” was doing on the radio. When answering a fan submitted question talking about if having the Disturbed name part of the band helps or hurts their recognition, Will said it only helps. At first people thought Device’s first single was a new Disturbed song but then found out it was David Draiman’s new project called Device.

While talking with Aaron from Gemini Syndrome, we talked about the show in Omaha being the last night they were playing with Device and how it really helped touring with them to build their name and band recognition. So many people would come up to Aaron and tell him after their set they wish they would have found out about Gemini Syndrome earlier and now they have a fan for life. Aaron also talked about the band’s unique look and how sometimes on tour, they feel out of place and get some strange looks but they wouldn’t change anything about their band because they love what they do. Gemini Syndrome has a new album coming out later this year so watch for that.

Make sure to check out the links below for our interviews and photos from the interview and show on Backstage Entertainment’s page.

Photos of the Night by McCurdy Pix