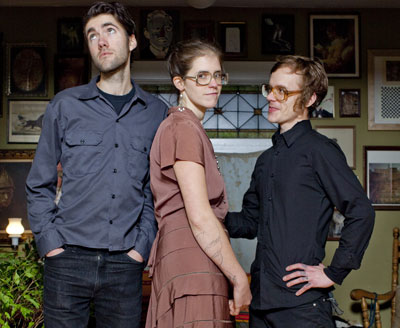 Dark Dark Dark’s Marshall LaCount doesn’t want this to sound like a boast. Or that he’s an egotist. Really, all musicians are, he says. But that’s not why he’s hopeful and confident in the direction his band is taking. So there’s this: “I think we’re ready to make our really great record next,” LaCount says. And this is despite the fact that Dark Dark Dark’s latest album Wild Go just came out in late 2010. There’s nothing to be gained from touting these lofty expectations. LaCount says he’s just ready to do the album-recording thing again. He says he knows why Wild Go isn’t perfect in his mind and he feels as if the band’s skills as songwriters, arrangers and editors of their own work have them pointed towards making music that LaCount feels the band is capable of creating. “I’m excited by how we’ll keep growing,” he says. That’s certainly not to write off Wild Go , an elegantly conceived album of chamber pop. Led by singer Nona Marie Invie’s floating vocals and an eclectic instrumentation that leans on eastern European flourishes. DeVotchKa and Joanna Newsom are obvious contemporaries, but Dark Dark Dark seem to be following their own muse, highlighted by a sense of grandeur on a track like “In Your Dreams.” It’s a rich palette, but they don’t let the layers get in the way of melody either. Even Wild Go and the subsequent touring has been a fun period of growth for the band, LaCount says. The record was recorded in and around Minneapolis and at a church in Duluth, Minn. He says the band was trying to have more natural, musical feeling in the recording they did, as a contrast to how they made their first album, The Snow Magic . They tried to go all live, all in a room and all analog. He says it was all an attempt to show how the band truly communicates as musicians. That’s something The Snow Magic missed. In fact, LaCount says he considers it less an album and more of a document of the band’s first two years of songwriting. Now that process consists of Invie writing and LaCount editing the songs. Sometimes the roles are reversed and sometimes LaCount will contribute lyrics to music Invie has created. LaCount says he likes when they seemingly work in tandem. “I think it’s really special when we can collaborate more directly,” he says. The band has spent most of its existence on the road, touring both here and overseas. The schedule is so busy that LaCount hasn’t kept a permanent address for very long. “I don’t live anywhere again. I just moved out of New Orleans,” he says. LaCount says the touring gives structure and activity to life on the road. It makes the traveling work-oriented, instead of just drifting about. It’s where the band likes to be, too. The band just returned from about three weeks worth of dates in France and immediately hit the road to Iowa City for a show. “We prefer to be out playing music for people,” he says. “We’re always on the road.” A 10-day break will precede the next run of dates that will bring the band through Omaha. Then the band will return to Europe in May. They have developed a surprising following abroad, drawing enthusiastic crowds in unexpected locales, LaCount says. The band is basically scheduled for the rest of the year. The members that have permanent homes won’t be there for any big chunk of time. For LaCount, that means he doesn’t have to think about where he’ll live next for quite some time. There’s now an infrastructure in place to regularly tour in Europe. That comes from the band having risked a lot early on to be able to find booking agents and labels to work with. They have been fortunate to have their hard work rewarded with the success they’ve had so far, he says. “These opportunities keep building around us,” LaCount says. Dark Dark Dark w/ Honey & Darling play the Slowdown, 729 N. 14th St., Thursday, April 14 at 9 p.m. Tickets are $8. For more information, visit onepercentproductions.com.